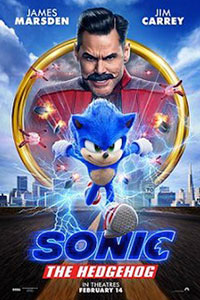 Sonic the Hedgehog is based on the popular Sega video game from the 1990s, where players navigate a blue cartoon with red sneakers across rollercoaster-like worlds. The game was basically anthropomorphized pinball. Players drive a voiceless speed-demon through slopes and loops, evading the occasional spikes or bottomless pit, all the while collecting golden rings that reward each acquisition with a satisfying ting. At the end of each level, the resident villain, Dr. Robotnik, appeared in a mechanized contraption that required destroying. The simplistic plotting was expanded in later cartoons and next-generation games, although the basic appeal has always been fast gameplay, not the character dynamics or storylines. So what could the movie version possibly entail? Expect nothing less than Sonic riding a mechanical bull, punching drunks in a bar fight, and not one but two shameless plugs for Olive Garden.

The movie reminds me of Hollywood’s take on Masters of the Universe (1987) or Super Mario Bros. (1993), where the result only superficially resembles the source material, and the treatment has more in common with Star Wars and E.T. the Extra-Terrestrial. Pat Casey and Josh Miller’s script opens on Sonic’s home planet of CGI, where, for some reason, he’s raised by an armored owl called Longclaw—an apparent reject from the Owls of Ga’Hoole. She’s “basically Obi-Wan Kenobi,” explains Sonic to his Star Wars-saturated audience, using intermittent voiceover performed by Ben Schwartz. But Longclaw is dead almost as soon as she’s introduced. Like Luke Skywalker, our spiky blue hero narrowly escapes tragedy at home before transporting to a much larger world. Using his bag of golden teleportation rings, he emerges on Earth for fish-out-of-water antics. Sonic lives in a cave and learns about earthlings from American pop-culture, and he adopts millennial-speak and a hipster attitude that will appeal to children and idiotic adults.

How strange that Paramount Pictures, who spent millions to redesign the Sonic character after fans balked at his overly human appearance in 2019, delaying the movie’s release by several months, didn’t also inject some life into the character. Sonic is the least interesting part of Sonic the Hedgehog, no matter how he looks. He talks and behaves like every Dreamworks cartoon character from the last decade, and he’s generically hip, no different than a mascot or billboard icon. Moreover, director Jeff Fowler robs Sonic of his basic appeal in some sequences. During a dangerous highway chase, for instance, Fowler leaves Sonic inside a pickup truck rather than making good use of his signature speed. Elsewhere, the movie makes dull attempts to earn our sympathy. After Sonic uses his hyper-fast feet to play baseball or ping pong by himself, you can tell he’s lonely because of his sad face and heavy sighs—performed with all the dimensions of an emoji.

Rather than keep Sonic in an animated video-game world, where he belongs, we’re forced to meet his new live-action friend, Tom Wachowski, a bored cop from Green Hills, Montana. Played by James Marsden, who’s charming and somewhat cartoonish in the role, Tom wants adventure. He plans to move away from his conspicuously gorgeous house to San Francisco with his wife Maddie (Tika Sumpter), except the government soon gets wind of Sonic’s presence. They send the futuristic “freak” scientist Dr. Robotnik, played by Jim Carrey behind an elaborate mustache and a long black coat, to capture him. Armed with elaborate gizmos and an arsenal of drones, Robotnik prefers machines to humans because, he says, “they don’t need time to get drunk and put the boat in the water” (one of the movie’s only laugh-out-loud lines). The role returns Carrey to his 1990s comedy luster, delivering a curious combination of his own Ace Ventura with a touch of the game designer J.P. from Grandma’s Boy (2006) and the psychotic agent played by Jeffrey Combs in The Frighteners (1996). It’s a weird, over-the-top performance, probably the best thing about this movie, and also increasingly annoying as the 98-minute runtime ticks away.

At every turn, Sonic the Hedgehog proves to be uninspired and unoriginal. Borrowing the best moments from recent X-Men movies, wherein Quicksilver moved about at top speeds in a world that appears still, Fowler offers a couple of visual gags where Sonic maneuvers faster than the eye can see. He also presents a sequence where Sonic zips around to Queen’s “Don’t Stop Me Now”—which boasts the lyric, “I wanna make a super-sonic man out of you.” With the aforementioned Olive Garden reference, which worsens the second time around when Sumpter and Marsden utter the so-called restaurant’s slogan (“When you here, you’re family”), it’s actually surprising that Sonic doesn’t swing by a Sonic drive-in for a Sonic hamburger and Sonic fries slathered in Sonic sauce, with a Sonic smoothie on the side.

Regardless of critical disdain, Sonic the Hedgehog earned over $300 million at the box-office, ensuring that Paramount would greenlight a sequel to this shameless hunk of commercialism. In a disastrous year for theaters due to COVID-19, it will doubtless remain the third-highest grossing release of 2020. How depressing. The movie is bland and predictable, leaving almost no impression whatsoever—aside from quiet anger over just how much the result feels like the work of studio executives calibrating every creative choice for maximum profits. If it weren’t so sad, it might be funny that so many fans clamored for Paramount to fix Sonic’s appearance, only to receive yet another hollow commercial-of-a-movie. If only the voices on social media would use their apparent influence over the studios to demand a better script and fewer product placements.