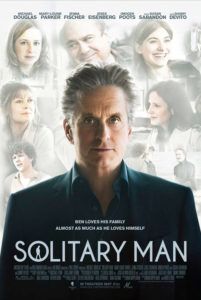 Solitary Man provides all the needed elements for a sequel to Oliver Stone’s great Wall Street. Of course, Stone is already set to release a sequel to his 1987 film, but the potential exists nonetheless. Michael Douglas plays a former entrepreneur who was caught scamming his customers; his empire crumbled, and now, through the course of Brian Koppelman and David Levien’s film, Douglas’ character reassesses his life. Imagine Gorgon Gekko going through the same process, which twists him into a sympathetic character. Then again, Gekko represents the inhumanity and dogged two-facedness of the financial world, whereas Douglas’ Ben Kalmen has a human side capable of exposure.

Six years ago Kalmen learns that he may potentially have heart problems; he never finds out for sure, because he never allows the doctors to run their tests. Instead, Kalmen becomes an oily womanizer and ruins his “honest” car dealership through shady deals. After six years of bad behavior, his wife (Susan Sarandon) has divorced him, his dealership has closed down, he has no income, and his daughter (Jenna Fischer) is growing fed up with his ways. Kalmen boasts about his female conquests, his ability to use those always-be-closing salesman skills to talk young women into bed. But as his friends and family slowly realize that he will never change, they leave him, and this is when he begins to ask himself if his lifestyle needs a change.

Things go south when Kalmen escorts the 18-year-old Allyson (Imogen Poots, from 28 Weeks Later), the daughter of his girlfriend (Mary-Louise Parker), to a college interview at his alma mater. She wants to explore the college nightlife; he wants to pick up college girls. Somehow they end up together. Meanwhile, at the college, Kalmen meets Daniel Cheston (Jesse Eisenberg), an awkward young student that looks up to him for his former glory in big business. Yet as Kalmen gives the boy advice on how to pick up girls, he’s speaking from the perspective of a failing husband and father. Also on campus is Jimmy Merino (Danny DeVito), a former classmate who now runs the local café and deli. The character is worth mentioning if only to acknowledge that real life friends Douglas and DeVito have worked together numerous times since One Flew Over the Cuckoo’s Nest in 1975, in which Douglas produced and DeVito starred. They also appeared onscreen together in Romancing the Stone, The Jewel of the Nile, and The War of the Roses.

Despite his man-whore ways, Kalmen derives a profound humanity from Douglas. In his heyday, Douglas played a range of sleazy protagonists that all became strangely sympathetic because, after his own troubles with sex addiction, the actor understood these characters. Titles like Basic Instinct, Disclosure, and Fatal Attraction would have never worked without Douglas starring. And it’s difficult to imagine anyone else but Douglas making Ben Kalmen such a likable role, despite his hit-bottom behavior. How many actors could make such awful behavior seem forgivable, even incorrigible? After all, he practically played this role already in the delightful Wonder Boys. And since Douglas has disappeared from the A-list of the Hollywood elite in recent years, it’s a joy to see him back in top form, playing a part that fits his persona so well.

The major downfall of the film is the ending. While this review won’t go into detailed specifics (skip to the next paragraph if you want a spoiler-free finale), the conclusion leaves Kalmen at a crossroads, where he can either choose a happy life fulfilled by loving friends, or he can resume with his self-serving ways on the downward spiral to oblivion. The film closes without showing us which choice Kalmen makes, which may work for other indie fare, but doesn’t work here. Douglas’ portrayal walks the line between affable and despicable so closely that his decision could determine if the audience identifies with the man, thus the film, or not. It’s a typical move on the part of Koppelman (writer of Rounders), who wrote the script, and it’s an ending you’ve no doubt seen before in films about self-reflection. Perhaps its selfish to demand a happy ending, but after putting the audience through the ringer with this character, we deserve it.

What’s unfortunate is that this independent production distributed by Anchor Bay Films was dumped into a limited theatrical release and all but ignored, because the advertising wizards at the company had no idea how to market the film. When your cast consists of Douglas, Sarandon, DeVito, Eisenberg, Parker, and Fischer, your advertising strategy shouldn’t be much of a challenge. Show some funny clips from the film, suggest the somber undercurrent, and emphasize the weight of the celebrities involved. People will see it. At the very least, it could have provided solid counter-programming against a summer blockbuster, if properly distributed. Alas, Solitary Man must fight its way into your home on the video market, where it’s certainly worth seeking out.