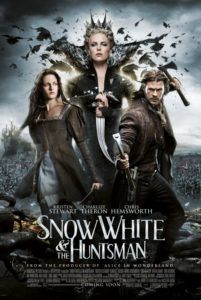 A refreshingly serious-minded fairy tale, Snow White and the Huntsman harkens back to the age of Old English literature, before even the Brothers Grimm first published Snow White. Anglo-Saxon tales of swords and sorcery described earthy European landscapes as both dark and unforgiving, and that’s where much of this film takes place. First-time director Rupert Sanders and screenwriters Evan Daugherty, John Lee Hancock, and Hossein Amini put aside most of the cheery influence otherwise derived from Walt Disney’s 1937 animated version to explore the themes running through the original tale of terror, sexual anxiety, and gruesome violence. Like the Grimms’ legend, there’s more to frighten children here than there is material for a bedtime story. Although a healthy dose of clashing medieval battles and magical fairy forests tone down the gothic overtones, the weighty mood dominates this attractive if emotionally vacant production.

The opening belongs to Ravenna, the evil queen played by Charlize Theron, who overdoes her breathy pseudo-English accent but demonstrates real madness in her eyes. Her character assumes the throne by murdering the good king in his bed chamber on their wedding night, whispering in his ear her rage over men in the male-dominated world and how they use up what she perceives to be the sole power given to women: their beauty. After killing him, Ravenna locks up his lone child Snow White in a tower to rot. All at once, life fades out of the kingdom. As the years pass, this furious, vengeful queen guards her considerable power by sucking the life out of the kingdom’s young women, as they’re potential threats to her sexuality-driven dominance. But when Ravenna’s liquid metal mirror says she is no longer “the fairest of them all,” she plans to murder her competition, the now “of age” Snow White (Kirsten Stewart). The young princess escapes into the dangerous dark forest, and Ravenna hires a good-hearted Huntsman (Chris Hemsworth, aka Thor), followed by her weirdo and borderline-incestuous brother (Sam Spruell), to find her.

Once Snow White escapes into the forest, the film’s gothic edge gives way to a Tolkien-inspired fantasy of heroism and little people. The Huntsman, a grief-riddled widower who drowns his sorrows in mead, soon ditches his evil escort and teams with Snow White to help her escape and lead a revolution. Meanwhile, the resident prince, William (Sam Claflin), a young nobleman and childhood sweetheart of Snow White, seeks out his former love in hopes of dashing to her rescue. Yes, Stewart is once again inside a love triangle, but this one’s outcome is easier to predict (after all, it’s not called “Snow White and the Prince”). They make friends with eight—yes, eight—dwarves, one of whom dies, leaving the appropriate seven. Much like Peter Jackson did in his Lord of the Rings Trilogy, Sanders shoots taller folk instead of using real dwarf actors, but the actors used are so good and the effect so flawlessly integrated that one can hardly complain. Some of Britain’s finest character actors (Bob Hoskins, Ray Winstone, Ian McShane, Toby Jones, Nick Frost, and Eddie Marsan) embody the seven dwarves and don’t humiliate themselves through insufferable comic relief. They don’t have names like Dopey and Sleepy and Itchy and Smelly; they have names like Beith, Muir, and Gort, and rather than sing “Hi ho!” they recite a sobering funeral song.

Their journey takes them into a fairy-laden forest untouched by Ravenna’s darkness; it’s a wonderfully realized product of CGI, complete with lush greens, cute and cuddly creatures, and wide-eyed fairies scampering about. At any moment, we expect Tangerine Dream to play one of their peculiar synth ballads. It feels like a fantasy garden designed by Hayao Miyazaki and Guillermo del Toro. Indeed, the environment can’t help but recall the enchanted forest from Miyazaki’s Princess Mononoke, complete with a white deer-like forest spirit who stands on the other side of a miraculous pond, while the local fairies look like something out of Pan’s Labyrinth or Hellboy II: The Golden Army. By contrast, everything outside of this realm has a muddy, drab appearance reminiscent of Middle Earth’s ghostly Dead Marshes on the road to Mordor. Perhaps that’s why these bright scenes stand out as the film’s most memorable.

The film takes another tonal shift when at last, Snow White has formed an army to battle Ravenna. Stewart struggles to remain believable during her rousing “let’s go to war!” speech, but energy levels are high once everyone’s decked out in armor and storming the castle, so it hardly matters. Sanders switches his visual influence from Del Toro and Miyazaki into pure Ridley Scott mode and steals like mad from Robin Hood, complete with a beach-set battle on horseback and volleys of arrows jetting through the sky. The battle scenes are throwaway and brief, merely the lead-in to the climax against Ravenna where good triumphs over evil, a resolution as predictable as can be. Not that anyone expected something radically different to transpire, but our emotional involvement in the overall conflict is diluted. The lacking attachment to these characters recalls another Scott film, Legend, where the staggeringly beautiful production values outweigh the thinned-by-destiny characters. Everyone onscreen has a predestined path, therefore how can they surprise us or make us care?

Although functional and certainly not unpleasant in the role, Stewart just doesn’t have the range to pull off the transformation made by Snow White over the course of the story. She goes from meek prisoner to reinvigorated rebel, from warrior princess to regal queen. Comparable transformations have been made by Keira Knightley in King Arthur and Cate Blanchett in the aforementioned Robin Hood, but those are two powerhouse actresses. Stewart, for all her popularity and onscreen appeal, doesn’t compare to actresses of their caliber. Her youth and her standard romantic uncertainty routine betray the character’s rise to power, whereas an actress capable of a little more oomph could have given the role far more passion. Theron, however, commands the screen and makes a terrifying antagonist, despite a moment or two of overacting. She reminds us why she earned an Oscar for Best Actress. But the standouts are the dwarves in both character and performance. What Hoskins does with his blind elder’s voice and wise, peaceful temperament goes far beyond any other role in the film.

Much like Tarsem (The Fall), who directed 2012’s other Snow White movie (the cheeky and abysmal Mirror Mirror), Sanders’ sizeable talents as a visualist alas do not include a similar control over the narrative. Without a doubt, Sanders and his writers were inspired by many similar films when making Snow White and the Huntsman, as the influences are embedded into the presentation, sometimes distractingly so. And though derivative, the innovations are also inspired and carefully imagined; the polished efforts of production designer Dominic Watkins and cinematographer Greig Fraser should not go unnoticed. This is a gorgeous production, but it’s also a romantically dormant one whose characters and their fixed motivations never make a connection. This is a small tragedy, since there’s a great movie in here somewhere. Fortunately, the dramatic mood and gravitas-infused approach do more to involve the audience than the romance, and all the pretty pictures onscreen keep us watching. Inconsistent but admirably made, it’s a fascinating film worthy of exploration.