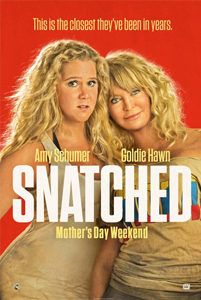 Amy Schumer plays another mess-of-a-person in Snatched, her first starring role after her 2015 breakout, Trainwreck. Her character, Emily, drinks wine by the bottle, can’t keep a job, and her boyfriend (Randall Park) breaks up with her in the first scenes because she’s a loser. It’s a familiar type of act for Schumer. Thus far in her career, she has resolved to maintain her stand-up persona, the down-to-earth party animal with foul-mouthed attitude. Like Chevy Chase or Eddie Murphy before her, Schumer has maintained her comedic brand identity in her movie roles, playing rude and self-obsessed characters who behave badly and prove all the funnier for it. Even if her stand-up material has somewhat dried out in recent years (her recent Netflix special proved almost laughless), she has the potential to become a major movie star.

Speaking of typecast stars, Goldie Hawn costars and plays Linda, Emily’s mother. Hawn hasn’t appeared onscreen since 2002’s The Banger Sisters. Over the years since her days on Rowan & Martin’s Laugh-In, she’s maintained a steady career of playing ditzy and giddy characters, with rare exceptions like Swing Shift (1984) and Death Becomes Her (1992). After fifteen years in semi-retirement, she returns to a kitschy role that bears some comparison to similarly desperate late-career parts by Shirley MacLaine (in Bewitched), Jane Fonda (in Monster-in-Law), and Faye Dunaway (in The Bye Bye Man). Except, the role feels underwhelming and Hawn underused, her part perhaps less substantial than her return to the screen should be. Her presence is obvious stunt casting, placing the blonde ditz comedienne of yesteryear next to a modern day equivalent. In an era when strong female characters are few, Snatched feel ill-timed.

The movie may boast an ideal comic pairing with Schumer and Hawn, but the screenplay by Katie Dippold (behind the underwhelming Ghostbusters relaunch) does the stars a disservice. The scenario finds Emily hitting rock bottom and reluctantly inviting her mother Linda on vacation to Ecuador. Hawn’s Linda needs convincing, as she’s an introverted divorcée who spends most of the time either fawning over her cats, nagging her daughter, or coddling her rather hilarious agoraphobic mama’s-boy-of-a-son (Ike Barinholtz). Once in Ecuador, she’s content reading her book and turning up her nose at Emily’s reckless partying. Meanwhile, Emily finds herself the object a local’s affections in James (Tom Bateman), who ends up delivering Emily and Linda to a band of kidnappers in Columbia, headed by Morgado (Óscar Jaenada).

Most of the comedy involves mother and daughter escaping their captors somewhere in Columbia, pursued by Morgado, and making their way through the jungle to Bogotá for eventual rescue from the U.S. government. All the while, endless bickering and banter provide most of the laughs, along with a few unexpected dead bodies. A frequent pattern of the movie’s humor involves build-up and let-down. For instance, Linda and Emily meet a pair of paranoid vacationers, played by Wanda Sykes and Joan Cusack, at the Ecuador resort. Sykes tells them that Cusack was a former Special Ops badass who cut out her own tongue. Inevitably, Sykes and Cusack come to the rescue when our heroes are kidnapped; but rather than see the mute Cusack take down the bad guys, the sequence peters out and the build-up of her character never amounts to much. Similarly, but much funnier, Christopher Meloni appears as an adventurer determined to rescue Emily and Linda, though his eventual inability to help their situation becomes the best joke of the movie.

Likewise, opening titles warn that Snatched tells a true story about two Americans kidnapees who left a trail of blood and bodies in their wake. From this, the viewer expects a certain excess of bloodshed and violence, though the few accidental deaths prove underwhelming and not quite as over-the-top as they were promised to be. Add to this several gaps in even the most rudimentary logic, and the movie falls apart under any degree of scrutiny. Take a scene in the finale in which Emily and Linda, trapped outside a secluded warehouse, are confronted in at gunpoint by Morgado. Earlier, Linda gave Emily a dog whistle, thinking it was a rape whistle. This detail is forgotten until the climax when, predictably, Emily blows the dog whistle and, from out of nowhere, a dog appears and attacks Morgado. It’s important to note that the attacking dog hasn’t appeared in the movie so far. Even stranger, someone offscreen calls “Here boy” to call off the attack.

How did the dog know to attack the kidnapper instead of, say, just running to Emily in response to the whistle? Who was the random guy that called off the dog’s attack? As finale’s go, Snatched has an inexplicable one, but it follows that the ending shouldn’t make any more sense than the rest of this lazily told story. Certainly, this is another forgettable summer comedy about which no one will have anything meaningful to say, which is unfortunate given the potential of the cast. Director Jonathan Levine (Warm Bodies, The Night Before) gives the production a generic quality with no interesting formal choices to mention, while the writing seems thin, as though the filmmakers had the cast in place first, but then tried to develop a movie around the pairing. As promising as a Schumer/Hawn team-up sounds, the two have little onscreen chemistry, comic or otherwise, and the occasional laughs are mostly from the supporting cast, leaving Snatched to feel like a missed opportunity.