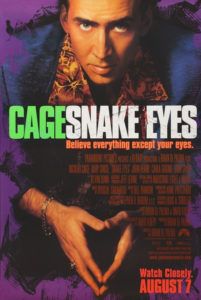 Brian De Palma has made better films, but few have been as underrated as Snake Eyes. The 1998 thriller stars Nicolas Cage as corrupt Atlantic City detective Rick Santoro, a morally bankrupt protagonist who long ago decided there isn’t a line he wouldn’t cross if there’s a payday waiting for him on the other side. Not unlike John Travolta’s hero in De Palma’s Blow Out, Cage’s Santoro gets wrapped up in an assassination conspiracy after close inspection of a disturbing hidden video. And like that film, a twisting plot and flashy presentation achieve a form-follows-function study of the ruthlessness of politics and show business. De Palma and screenwriter David Koepp construct a scenario that could be misinterpreted as an exercise in pure style; but their incredibly conceived artifice has higher aspirations, delivering an audacious production that mirrors the protagonist’s superficiality and becomes a stirring character study.

De Palma and Koepp establish every breadcrumb Santoro picks up throughout his investigation in the opening’s unbroken, 12-minute Stedicam shot that rivals the one in Orson Welles’ Touch of Evil. The film begins with a newscaster reporting on the arrival of “Hurricane Jezebel” from outside an Atlantic City hotel-casino-arena. Then, without cutting, the camera moves away from the newscaster, who actually appeared only on a monitor from within the arena, and follows Cage’s ostentatious character through the stadium hallways as he schmoozes with a reporter friend, hovers around The Champ’s dressing room, leaps over an escalator to shake down a drug dealer for loose cash, places a bookie bet with the dealer’s green, makes his way to the stadium floor, juggles calls from his wife and girlfriend on his gold-plated cell, flirts with a round card girl, and finally takes his seat next to longtime friend Commander Kevin Dunne (Gary Sinise), the leading security detail for the attending U.S. Secretary of Defense (Joel Fabiani). The shot holds through the Heavyweight Championship bout’s initial punches, and breaks only when a knockout punch is delivered, which is also the moment a concealed assassin emerges to shoot down the Secretary. 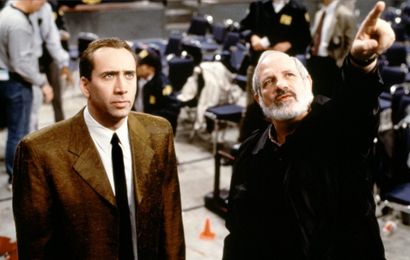 Shot at the old Forum in Montreal, the superior timing and preparation required to orchestrate such a shot is inconceivable, not to mention just plain impressive. From the multiple plot strings set up in the first reel to the thousands of actual extras cheering in the stands, De Palma’s control over it all never wavers for a moment. What’s more, he wants his audiences to notice how long his shot lasts, and so the frame remains stable and fluid, gliding along with intentional turns and clever angles, without a single moment where the viewer suspects a hidden cut. But his formal bravado is not isolated to the opening sequence. Throughout the picture, De Palma employs Rashomon-esque flashbacks that return us to varying perspectives within these crucial first moments, and each one is recounted with alternate angles. If De Palma and cinematographer Stephen H. Burum claimed that thirty individual cameras were all shooting the same sequence at once, you’d have to believe them—the continuity is just that consistent.

Blood spatter from gunfire interrupts the tracking shot and from there the story follows Santoro as he seals the complex to hold 14,000 eyewitnesses to an assassination. Dunne frets that he left his post at a decisive moment and created an opening for the sniper, but slick Santoro tells him how to spin the moment in his favor. The crooked detective’s investigation leads him to the discovery of a phantom punch and a fall taken by the residence champ Lincoln Tyler (Stan Shaw), but Santoro is none-too-concerned; he uses the information to blackmail Tyler for a hearty sum of cash and an autograph for his child. Cage’s pitch-perfect performance as a proudly dishonest and flawed hero quickly softens as he tracks down a crucial witness, the mealy government office employee Julia (Carla Gugino). She intended to play the gallant whistle-blower, reporting to the Secretary a cover-up which implicates participants in a multi-million-dollar weapons deal, but instead she got him killed. Indeed, Julia was the target all along and the sniper missed, and when she reveals to Santoro that Dunne was a co-conspirator, it forces him to pursue a rare act of genuine heroism.

Nevermind the political motivations behind the conspiracy; De Palma and Koepp’s scenario reveals the source of the cover-up and Dunne’s treachery early-on to dwell on the real kicker: how Santoro will react. The film hinges on Cage’s character reaching his limit of corruptibility after being betrayed and used by Dunne. Nevertheless, in true film noir fashion, Snake Eyes doesn’t leave Santoro unpunished for his otherwise unscrupulous lifestyle. The film ends with Santoro bound for prison and kissing Julia—his overdue love interest—goodbye. As the end credits roll, the camera zooms in to find a jeweled example of De Palma’s scathing assessment of the situation: the system of corruption always prevails, no matter how many people need to be put down along the way. De Palma realizes that even next to the technical skill on display, Cage’s character steals the show, and so the mystery’s turns prove less important than where Santoro ends up, and the deceptive panache used to get there. Indeed, Cage is De Palma’s most useful cinematic tool, his onscreen energy so wild, yet focused, unlike some of his late-career self-indulgences.

Upon its release, the technical genius on display was outshined by the mainstream view that Snake Eyes is a neo-noir downer whose central character was irredeemable. All the bird’s-eye-view angles, split diopter lenses, and clever video tricks couldn’t rescue the film from being pigeonholed by expectations normally associated with its advertised genre. When viewed as a political thriller, its lack of last-minute twist or plausibility operate against it, while the conspiracy itself is questionable. Snake Eyes failed to click with audiences and critics, and performed poorly at the box-office as a late-summer release—this just a year after Cage actioners Face/Off and Con Air solidified him as a blockbuster star. But here’s a film, not unlike Hitchcock’s North by Northwest or the aforementioned Touch of Evil, whose destination punctuates the importance of the journey. And when so many viewers gave up on on the picture after the conspiracy was revealed (some forty minutes in), they missed that both the journey and the destination contain some harsh notions about outlets in the media and government using the gloss of show business as a distraction from the seedy deals being made behind the curtain.

Perhaps, in the end, the implications of De Palma and Koepp’s story were so interwoven into the diverting, virtuoso mise-en-scène that they were ironically overlooked by the majority of moviegoers. It’s not unreasonable to question how a film so rooted in showmanship, so driven by technical luster, could ever contain serious themes. Even cineastes familiar with the director’s body of work should take a second look at Snake Eyes to see beyond the pretense and recognize that it’s the film most closely connected to his masterpiece, Blow Out. The trend of failing to see the meaning behind his most explicit or visual films has plagued De Palma’s work since his earliest efforts, leading to his dismissal as a mere Hitchcock imitator or voyeur filmmaker. But the approach is also the most crucial indication of his auteur status, the defining characteristic of a director whose films are as much about pure filmmaking as they are about the deconstruction of a subject.