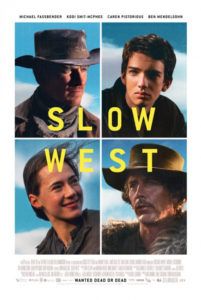 John Maclean’s deep appreciation of the American Western seeps into every frame of Slow West, the first-time writer-director’s fatalistic tale of love, black humor, and unromanticized violence. Set after the Civil War, during the decline of the era’s wildest days, this beautifully shot production moseys along with shrewd intelligence and artful display of the landscape. Having won the grand jury prize for best international drama at Sundance, the British-New Zealand co-production uses the latter country’s vast and gorgeous sceneries to stand in for the American West. Where Monument Valley would have been familiar to moviegoers’ eyes and, in a way, comforting to see, Maclean uses curious-looking backdrops that evoke a sense of mystery, unease, and even a dreamlike quality, as though the characters have ambled into the transcendent Middle Earth. Indeed, all manner of orcs and goblins appear throughout, though they’re seen in the forms of crooked explorers, desperate farmers, and bloodthirsty bounty hunters.

Making his way from the Scottish highlands to the wilds of Colorado, 16-year-old Jay Cavendish (Kodi Smit-McPhee), gawky and inexperienced, searches for the young woman he loves, Rose Ross (Caren Pistorius). Shown in a series of flashblack-dreams, Rose has fled to the Americas along with her father (Rory McCann) to escape punishment for a crime that Jay indirectly triggered. We also see idyllic scenes from Jay’s memory where it becomes clear to the audience, but not yet to Jay, that Rose sees him more as a younger brother than a potential lover. Jay’s unpreparedness for his possibly meaningless quest across the New World becomes obvious upon our first sight of him; while camping one night, he holds his pistol up to the stars and, like a child wielding a toy, imagines shooting them out of the sky. Doubtful he’s ever used that gun. His naiveté painfully apparent on his skinny and innocent face, Jay is confronted early on by a band of Union officers burning Native American villages and chasing them through the forest. Enter Silas Selleck (Michael Fassbender), a rugged Irish frontiersman and loner who saves him, then agrees to get Jay where he’s going, for a price.

The boy follows the skilled gunman across serene terrain and through gorgeous country fraught with unsavory types. Their first stop at a trading post proves tragic, as a married pair of desperate Scandinavian farmers enter and execute a nervous hold-up. After the shooting stops, the most unbearable part of the episode waits for them outside. Meanwhile, unbeknownst to Jay, a bounty has been placed on Rose and her father’s heads, and it’s big enough to attract all manner of seedy types. Silas describes those few remaining bounty hunters as relics of a dying era, the survivors being the strongest and most vicious of their kind. And he’s one of them, using Jay to lead him directly to the bounty. Indeed, Maclean isn’t interested in realizing a Fordian romanticism of the American West; rather, he considers his characters, like Anthony Mann did, as internally conflicted emotional beings who are reflected by their surrounding landscape. Jay is the peaceful campfire under the stars at night, whereas Silas is the stream that, without warning, explodes into floodwaters.

A Scottish musician from The Beta Band, Maclean started in film by shooting do-it-yourself music videos for his band and others. He delivers his first project as a filmmaker here after directing two shorts, “Man on a Motorcycle” (2009) and “Pitch Black Heist” (2011), both of which starred Fassbender, who executive produced Slow West. With his freshman effort, Maclean takes a pointedly European view of the West, where a wide range of immigrants (Irish, Scottish, German, and so on) have converged onto a stunning but thankless land that has been corrupted and raped by human beings. And yet, there’s a playful humor underneath his scathing assessment, hinted upon by Jed Kurzel’s lively plucking guitars set to a waltz tempo. In that sense, the film is the younger brother of Jim Jarmusch’s Dead Man and Joel and Ethan Coen’s True Grit, complete with the Coens’ bleak, surreal humor and Jarmusch’s offbeat yet mythic qualities.

Maclean’s slow-burning scenario proceeds with a detached sensibility, the scenes unfolding in the first half in an episodic, yet lyrical manner. Consider the German anthropologist, who studies the massacre of Native Americans, and tells Jay, “In a short time, this will be a long time ago.” Maclean applies his thoughtful perspective on history in moments like this, while others feel quietly meaningful, such as when Jay stops to listen to three French-speaking Congolese musicians playing in a field. As Jay and Silas get closer to Rose and her father’s hideaway, they’re followed by Payne (Ben Mendelsohn), a bounty hunter under a massive fur coat, and his rogues’ gallery of cohorts. A telling scene where Payne joins Jay and Silas at their camp has them drinking absinthe and shows how Silas rarely loses control, until he does. In the conclusion, Maclean delivers a sublimely executed shootout that, according to the director, is meant to evoke thoughts of John Carpenter’s Assault on Precinct 13 (1976) or, perhaps more accurately, Howard Hawks’ Rio Bravo (1959). Editors Roland Gallois and Jon Gregory cut the sequence to perfection and achieve an incredible level of tension between shots of bullets striking random objects and the sound of their impact on wooden walls.

Maclean stages several scenes of potent violence, but they occur so quickly, so succinctly, that they do not feel aggrandized, but rather dwarfed by the presence of his actors. Smit-McPhee has played similar roles before, most notably in The Road (2011), where he’s guarded by his father as they cross a post-apocalyptic wasteland. He’s aged since then, developing into a confident young actor who harbors an odd distinctiveness in his appearance and performance. Ever intense, Fassbender’s screen presence doesn’t compare to his turns in Shame (2011) or 12 Years a Slave (2013), but he’s incredibly effective in a role that, through the course of the narrative, does not fit into standard Western archetypes. These two leads play off each other well, such as when Silas teaches Jay to shave with a field knife. The moment is intimate, funny, and tense all at once. On the periphery, Mendelsohn is once again typecast as a slimy scoundrel but portrays him like an expert. Nearly all of Maclean’s supporting actors are talented New Zealand natives.

By the last scenes, Slow West is filled with heartbreak, but then a saddened acceptance washes over the events that have come to pass, an astute metaphor for the entire history of the American West. Maclean has made an impressively accomplished debut, blending Robbie Ryan’s pristine cinematography of the New Zealand locales with subtly intricate character development. From start to finish, the viewer is enthralled in the calm observation of the West through poignant moments that may seem removed from one another, yet all built toward Maclean’s unique perspective, informed by his European subjectivity and his palpable love of the Western genre. He immerses us in a severe but glorious land and cannot help but diffuse some of the story’s trepidations with droll moments. In one scene, Silas and Jay find a fallen tree, and underneath it, they see the skeletal remains of a man and an axe in his bony hand. We can imagine what happened. The image, like the entire film, reflects how the unforgiving, often wretched nature of discovery and Manifest Destiny also has a cruel sense of humor.