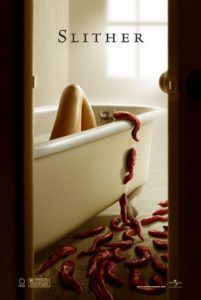 Trash becomes something more than low-budget exploitation with Slither, a goopy, gory horror-comedy from 2006 that pays homage to ‘80s genre classics. Writer-director James Gunn, who wrote 2004’s Dawn of the Dead, makes a particular kind of film for a particular type of audience. Those compelled by straight horror won’t be frightened, and those who enjoy their comedies without having to gag from disgust won’t be laughing. This movie is for those who can spot Gunn’s many visual and thematic references to the films that inspired him, who can grasp the irony of his characters, and who can appreciate his commitment tangible makeup effects.

Gunn’s well-drawn characters and their small-town setting add needed humanity to an otherwise familiar horror scenario. The story takes place in the southern town of Wheelsy, where the autumn highlight is the “Deer Cheer,” the town’s annual deer hunting festival. Here’s a hick town where the crusty mayor Jack MacReady (Gregg Henry) cusses about everything and everyone, where country cops pass the time by clocking birds on their radar, and where the most successful businessman in town has two first names. While flirting in the woods with Brenda (Brenda James), whom he met at the bar, Grant Grant (Michael Rooker of Henry: Portrait of a Serial Killer fame) becomes the host of an alien organism from a meteorite. Over the next day, his skin develops boils, and his sudden appetite causes more than one “Lost Dog” sign to go up. As for Brenda, Grand fills her body like a balloon with raw meat and the slug seedlings that come pouring out when she eventually bursts.

Grant’s considerably younger wife, Starla (Elizabeth Banks), calls the police worried when she finds a basement full of half-eaten wild animals and neighborhood pets. A reasonable reaction. Languid and sarcastic, Chief Bill Pardy (Nathan Fillion) comes to the rescue to find the now-transformed Grant, a sort of squid-slug thingy with sharp tentacles and a slime trail, attacking his former high school sweetheart for whom he still carries a torch. He saves the girl but then has to rescue the townsfolk from slippery red slugs. These creepy-crawlies enter through the mouth and turn their victims into part-zombie, part-drone under alien-Grant’s hive mind control. As a result, hordes of undead yokels slog along moaning “Meat!” and “Starla!” like a broken-hearted husband with a taste for human flesh. 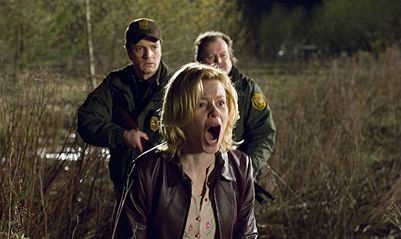 Though plenty of moments involve writhing in your seat as a space slug squirms toward its oral entryway into the human body, the movie isn’t exactly scary, but it sure is gross. Presenting a nod to David Cronenberg’s many bodily horror films (specifically The Brood and The Fly), Gunn’s movie monster is both a degenerative disease and a horrific creature. Rooker appears under inches of impressive makeup to achieve this effect, whereas his fast-moving slugs wriggle along thanks to CGI animation. Everything seems glossed by a layer of slime, and Gunn doesn’t hold back on the blood and guts either. The climactic moment when Grant appears as a mass of congealed, fleshy bodies that have assembled in a disgusting mass is both downright nasty and a wink at Brian Yuzna’s gross-out cult classic Society (1989).

Half the fun of a movie like this is pointing out what cult favorites are referenced where. From the first shot of the alien meteorite approaching Earth, which mimics the flying saucer approach from John Carpenter’s The Thing (1982), the right kind of viewer will see Gunn has made a movie that winks at its audience throughout. Character names like “The Castavets” recall Rosemary’s Baby (1968), whereas “MacReady” again alludes to The Thing, namely Kurt Russell’s character. The entire slugs idea stems from Fred Dekker’s 1986 horror-romp Night of the Creeps, wherein space slugs inhabit the bodies of college students and turn them into flesh-eating zombies. And Cronenberg’s films are filled with the idea that diseases spread with an eerie level of near-consciousness—Gunn clearly adores Shivers (1975), an early Cronenberg film about gooey parasites that turn their hosts into mindless zombies.

But what makes Slither a horror-comedy, in the same way that Shaun of the Dead (2004) or Tremors (1990) are horror-comedies, are the characters and their reactions. Alien-Grant, for example, is not merely a monster that has existed for billions of years while feeding on various planets; part of him remains a husband unwilling to subject Starla to the same fate as the rest of Wheelsy. When the creature and Starla start looking into each other’s eyes all dreamily to “Every Woman in the World” by Air Supply, you can’t help but laugh. As affable leads, Banks lends a human layer to an otherwise one-note heroine, and Fillion carries over his signature humor from his cult-television series Firefly—he gets the film’s sharpest laughs with his perfectly dry you-gotta-be-kidding-me expressions. Gunn writes his characters as familiar types, but none of them feel over-caricatured or unreal.

In smart, self-aware horror movies like this, there’s always a commentary. Is it a leap to see uncontrollably hungry hive-mind slaves eating pounds of raw meat, and who remain hungry no matter how much they ingest, and then think about over-consumption in the United States? Besides, they’re all linked to Grant, the town’s most successful businessman, who feeds his subjects thoughts and words through his collective tongue. Could alien-Grant be a highly disguised symbol for big business influencing consumers? It may be over-analysis on the part of this horror fan, but it’s worth some idle speculation. Elevating himself from his roots with Troma Studios, the makers of The Toxic Avenger (1984) and other camp horror fare, Gunn legitimizes himself with Slither. When so many horror directors end up ripping off the films they admire because they’re simply not creative, Gunn comes along and shows them all how to take inspiration, pay homage, and yet remain individual and entertaining. In that regard, Gunn’s product is a triumph from a filmmaker with a distinct voice.