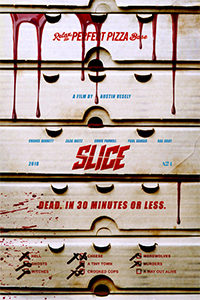 When a movie opens with “It all started when the werewolf came back to town,” there’s a good chance it has a sense of humor and will find its intended, cultish audience. A24 released Slice in the way some musicians drop a new album, with no forewarning whatsoever. The unconventional VOD release didn’t have so much as a trailer until a couple of weeks ago, while its production company kept promotional material to a minimum, relying on word-of-mouth. Fans of its star, Chance Bennett (aka “Chance the Rapper”), in his first acting role, will flock to the material, but this one’s for genre aficionados. Writer-director Austin Vesely’s debut feature contains the aforementioned lycanthropes, plus a slew of ghosts and witches inside a comic tone that, despite its messy plot and minor characterizations, is diverting enough for home viewing.

Opening with a nifty animated title sequence, Slice establishes a firm mythology in the early scenes. A fictional place called Kingfisher exists outside of time, somewhere in small-town America. It’s an odd community where people drive cars originating anytime from 1920 to 1960, and yet they have computers on which they visit websites that look contemporary for 1996. It’s also a world in which the supernatural is commonplace. Years earlier, the Halcyon Days Sanitorium, a place responsible for “experimental torture,” was torn down, and its residents entombed in an unholy burial. The 40,000 former patients have since returned as spirits and now live in the ghost-friendly quarter of Kingfisher, a ghetto called (you guessed it) Ghost Town. The ghosts linger around in the background of almost every shot, donning cheap practical makeup that makes them appear more like B-movie zombies than, say, the transparent ghosts of The Frighteners (1996). But Kingfisher’s residents also treat werewolves and witches like everyday occurrences.

Vesely spends the majority of Slice’s 82-minute runtime establishing a surplus of plots and subplots, none of which amount to much payoff. Dax (Bennett), the werewolf who arrives back in town after a long absence following a string of murders, shows up for no discernable reason except to propel the conflict. By coincidence, a different series of slasher murders committed against pizza delivery guys rocks the town. Jack (Paul Sheer), owner of the local ‘za joint, worries for his staff, while former employee Astrid (Zazie Beetz) sets out to investigate the death of her delivery boy ex (Vesely). Also on the case is Sadie (Rae Gray), a local reporter teamed with an ineffectual photographer (Joe Keery, better known as Steve from Stranger Things). Two detectives (Will Brill, Tim Dekker) investigate as well, doing so with the presumption and prejudice that the loner werewolf is responsible. Dax eventually teams with Astrid to find the killer. Meanwhile, the mayor (Chris Parnell) has an underhanded deal going with a coven of witches to exploit the forbidden burial grounds in a land deal.

If it wasn’t already obvious, there’s a lot going on in Vesely’s screenplay, certainly too much, and without enough screen time to allow these characters and situations to breathe. But the story is less important than the goofy tone and humor of it all, which recalls Fido (2007), The Final Girls (2015), or Joe Dante’s underrated Burying the Ex (2015). The synthesizer-laden, post-Stranger Things score by Ludwig Göransson and Nathan Matthew David, inspired by the music of John Carpenter, seems to think the material is scarier than it is. However, that’s part of the nostalgic appeal of the movie. And in spite of the supernatural and slasher elements, Slice boasts pure absurdist and morbid humor from gory practical effects and winking situations. Still, Vesely fails to create any tension, but that’s intentional—so are the cornball performances, low-grade makeup, and laughable CGI.

Somewhere in this setup is a commentary about profiling, discrimination, and gentrification, but these themes remain so underdeveloped—like most of the characters—that they hardly resonate. Doubtful anyone will be having a serious, thoughtful discussion about ghettoization or segregation afterward, but the substance is there, under the spooky, comedic surface and movie references galore. In his debut, Bennett’s charismatic presence is, nonetheless, wooden and at times awkward. Beetz, though, remains the most magnetic presence on the screen. Parnell, Sheer, and a brief appearance by Hannibal Buress maintain the laughs. But by the end, Slice is the kind of first try that makes this critic interested in seeing what Vesely will do next, as it’s evident he has a lot of imagination and comedic chops, even though he didn’t quite achieve anything memorable here.