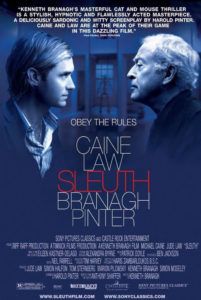 The visuals are supposed to do all the talking. We’re shown stories, rather than having them told to us, so how rare it is that a movie like Sleuth comes along without much need for more than words. Here, sharp camerawork is the garnish to dialogue; all the action is suggested or assumed by words—a filmic rarity. Few directors are able to work under such restraint. David Mamet (House of Games, The Spanish Prisoner) is certainly the champion of this atypical quality; each of his pictures is punctuated with incomparably smart writing and dialogue. With Sleuth, Kenneth Branagh, thespian actor and director of such Shakespearian masterpieces like Hamlet (1996) and Henry V (1989), as well as the notoriously underseen thriller Dead Again (1991), works under Mamet-type rules of cinema, showing us little but telling us everything.

Branagh’s Sleuth is a remake of a 1972 film, based on a play by Anthony Shaffer. In both pictures, wealthy introvert novelist Andrew Wyke is paid a visit by Milo Tindle, the man having an affair with Wyke’s wife. Tindle asks Wyke to grant his wife a divorce so that they might happily run away together. But Wyke has an alternate solution, which involves walking Tindle through a robbery of Wyke’s home, allowing Tindle to afford Mrs. Wyke’s expensive tastes. Wyke makes out because he gets the insurance money; Tindle gets Mrs. Wyke, as well as a bundle of cash from stolen jewels.

In the original, Sir Lawrence Olivier played Wyke, and a young Michael Caine was Tindle. Here, Caine advances to the Wyke role, and Jude Law plays Tindle. Law already rethought Caine’s Alfie a few years back to no avail; but under Branagh’s direction, Law proves himself resourceful in such a demanding role, worthy of this remake. And of course, Caine, one of the finest actors working today, surpasses his performance in the first. I can’t explain how or why these two actors excel in their roles, only because it would give away plot points I would rather not divulge. It’s enough to say that games are played between Wyke and Tindle. The 1972 version of Anthony Shaffer’s play was adapted to film (director Joseph L. Mankiewicz’s last) by Shaffer himself, keeping all of the bravado dialogue from his stage production intact. More substance resides in the original, with further conversation spreading out the two roles like the unfurling of a detailed tapestry. These showy conversations are like special effects to a blockbuster, each quip an explosion, every witticism a bit of CGI. The running time on the original lasted 138 minutes, not one moment of it dull.

Branagh’s significantly shorter picture likewise evades the mundane, although cuts down on the game between our two competitors. Instead of wordsmithing complicated insults and insinuation, allusions are brief and sharp, even direct, insomuch that their intimations are hidden between an express layer of metaphor and assumption. Branagh also pays great attention to how Wyke’s house, where the entire story takes place, is conceived in a post-modern style. Blue lights, like something out of a disco club, seem to give an otherwise plain setting a new-age glow. Every object or piece of furniture, in fact, has a radiance humming beneath it. Several scenes are shown through Wyke’s elaborate security system, in night-vision, or in black-and-white, keeping the entire picture more than simply a play on film. Branagh’s innovations interestingly retool Mankiewicz’s picture, which filled Wyke’s home with books and statues and paintings, like a Cabinet of Curiosities or a minor museum.

This time around, Shaffer’s play is reimagined by playwright and screenwriter Harold Pinter (The Caretaker, Tea Party). Pinter brings an additional, ambiguous layer to the opponents’ game. In the original, Wyke plays his game, and then Tindle his. Both aim at each other, their game undeviating and always threatening. Pinter offers a third component, taking off from where Shaffer’s original material ended. And while Shaffer’s two games serve clear winners, even closure, Pinter’s third unquestionably offers none. If it weren’t for the original Sleuth’s superb simplicity of character, Branagh’s remake might have received a four-star review. As is, it seems somehow post-modern and untraditional when compared to the Agatha Christie-esque succinctness Shaffer’s screenplay brings. Nevertheless, this is a capably envisioned picture, one of the few worthy remakes based on a classic.