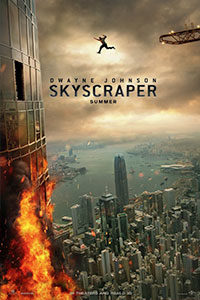 Dwayne Johnson is stuck in torch-receiving action hero mode. Ever since 2003’s The Rundown, when Arnold Schwarzenegger passed by The Rock and told the former wrestler to “have fun,” Johnson has been putting his stamp on a familiar blend of remakes, reboots, and retro-inspired adventure movies. He’s the post-modern action star whose output often seems dependent on nostalgia, whether it’s rethinking Joe Don Baker for Walking Tall (2004) or once again channeling Schwarzenegger for the epic-sized fantasy Hercules (2014). Given Johnson’s undeniable onscreen charisma, it’s unfortunate that he’s chosen a string of forgettable titles, each more inane than the last. For every inspired use of his talent in Get Smart (2008) or Moana (2016), there are a dozen silly and forgettable throwaway titles from San Andreas (2016) to this year’s Rampage. As a critic, I keep hoping to finally see a worthy use of Johnson’s charm, but those mythic and elusive movies remain rare.

In Skyscraper, Johnson occupies the roles of Bruce Willis in Die Hard (1988), but also Paul Newman and Steve McQueen in the disaster classic The Towering Inferno (1974)—similarities the production’s marketing campaign attempted to winkingly address, though such acknowledgment hardly makes the derivative setup easier to swallow. Johnson plays Will Sawyer, a former FBI tactical soldier who started his own security company after losing his leg during a dicey pre-credits hostage situation. Ten years later, he’s walking on a prosthetic leg and married to his doctor, Sarah (Neve Campbell), and together they have two children (McKenna Roberts, Noah Cottrell). His latest gig involves providing a security assessment of The Pearl, a structure “three times taller than the Empire State Building” and erected by bazillionaire Zhao Long Ji (Chin Han). The building features thirty stories devoted to an indoor park, a wind-powered turbine, and an orb-shaped virtual reality room at the top—complete with two-way cameras and panels that, inevitably, make for a mirror-laden climax modeled after the one in Orson Welles’ The Lady from Shanghai (1947).

When a shady villain named Kores Botha (Roland Møller) arrives in the mostly empty building and, along with a band of heavily armed goons, takes over the tower’s computer system, shuts down the safety systems, and sets fire to the place, the authorities blame Sawyer. A corny cop subplot follows the personality-less Inspector Wu (Byron Mann) as he questions whether Sawyer has masterminded the disaster. Meanwhile, Botha, far from the magnetic screen presence of Alan Rickman’s Hans Gruber in Die Hard, has more on his mind than destroying The Pearl—he’s after Ji’s secret hard drive for reasons not worth getting into in this review. But with Sawyer’s family trapped inside the burning tower, he’s tested by having to scale the building in a series of elaborate death-defying leaps and climbing sequences, therein overcoming the one-leggedness that has led to his diminished confidence. Of course, being a former badass allows him to take down the cadre of bad guys, doing so in mostly hand-to-hand combat because he’s sworn off the use of firearms. More impressive is a tense sequence where he must crawl on the building’s exterior, tethered only with a piece of rope and duct-taped sticky hands, in a CGI-heavy scene that pales in comparison to a similar, albeit thrillingly stunt-centric one in Mission: Impossible – Ghost Protocol (2011).

Writer-director Rawson Marshall Thurber, known for comedies like Dodgeball: A True Underdog Story (2004) and We’re the Millers (2013), previously teamed with Johnson on Central Intelligence (2016). Thurber’s script delivers the sort of movie that fulfills every dull requirement of a Screenwriting 101 course, in which every detail introduced in the first half is annoyingly readdressed in the second half. Consider the most grossly stupid of these plot conveniences: Early on, Sarah has trouble with her cell phone and asks Will to fix it. He proceeds to talk down to his wife, lecturing her on what he’s told her a million times: shut it down and restart it. Sarah, having been trained in the military where she worked as a doctor, nevertheless cannot figure this out, which is an insult to both the audience and the character’s integrity. At any rate, in the denouement, the apparently techno-dumb Sarah is tasked with hacking The Pearl’s computer and, of course, remembers how to fix technology when it’s broken: restart it. The moment is treated like a huge victory for Sarah, while the viewer cannot help but groan at this misuse of Campbell’s talent and an otherwise smart, strong female character.

Moreover, though Skyscraper takes place in Hong Kong and features a predominantly Chinese cast of extras and supporting players, the Canadian shoot reserved its main roles for Western performers (not that the movie does anything interesting with them). Thurber capably directs the action scenes and vertigo-laden sequences set atop The Pearl, having somehow convinced the legendary cinematographer Robert Elswit (who also photographed Ghost Protocol) to shoot the proceedings—so, at the very least, the movie looks good. The production also boasts convincing, expensive-looking CGI that elevates Skyscraper above some of the other B-level drivel that Johnson has appeared in lately. These elements make the movie serviceable escapism and blockbuster entertainment, while Thurber’s script spoils our enjoyment with its tired clichés and barefaced derivativeness. Johnson’s affable presence does much to make the action watchable, but the paint-by-numbers script panders, delivering only predictable, ingratiating twists and turns, characters without personalities, and a big-budget experience that’s content with being on autopilot.