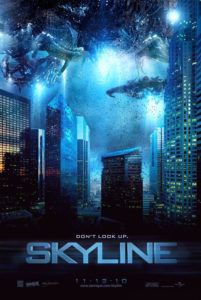 Skyline is a bioluminescent turd floating in the toilet of Hollywood. This slick-looking science-fiction yarn boasts expensive visuals made by incredibly talented specials effects wizards, but also has inept actors delivering laughable dialogue from an amateurish script. So tedious it’s painful, the shoddy execution fails to engage through each of its derivative plot turns, and the result feels best suited for a debut on the SyFy Channel. It’s low-budget fare that, much like the aliens in the movie, disguises itself with glimmering blue surfaces if only to slowly suck your brains out.

Colin Strause and Greg Strause (Alien vs. Predator: Requiem) produced and directed the movie, while Joshua Cordes and Liam O’Donnell wrote the screenplay. “The Brothers Strause” are also founders of Hydraulx, the company behind the visual effects in several high-profile releases (including Avatar, 2012, and Iron Man to name a few). Accordingly, the production’s CGI looks like that of an expensive blockbuster; but it was reportedly completed for a mere $10 million, with the physical shoot costing under $1 million. Technically, this is an independent movie, self-financed by Hydraulx and distributed by Relativity Media, yet it’s any wonder why someone didn’t spend another few (million) dollars on a script doctor to make their movie even moderately bearable.

After a hard night of partying, the central characters wake up in a flashy Marina del Rey penthouse apartment to find an alien invasion going on outside. Beams of light fall from the sky beckoning onlookers to gaze at the shimmery blue glow. Like the bioluminescent bait of a deep sea fish, spectators are entranced into unconsciousness, at which point they’re sucked up into the sky to the mother ship. Those that avoid being hooked by the lights must contend with tendril-laden pods and monstrous bio-organic creatures seeking stragglers. Stitched together from pieces of Independence Day and War of the Worlds and even Die Hard, the plot contains enough clichés to irritate even the most unsophisticated of viewers. You’ve seen it all before, from the single light-eyed tentacle snooping for survivors to the skies filled with dogfighting alien ships and fighter jets.

The action is confined to the apartment complex and rarely leaves the penthouse, which places the story in the hands of the actors. Eric Balfour and Scottie Thompson play an East Coast couple who are visiting his well-off friend, played by Donald Faison. Balfour never quite becomes the hero and instead resolves to just take up space onscreen with his unintelligible delivery. Crystal Reed and Brittany Daniel play the resident bimbos, and David Zayas plays the building’s attendant who comes to save the day. Everyone wants to make an attempt to the marina across the street, because for some reason they believe being on the water means safety, though it’s never explained why. Zayas has the unfortunate duty of telling them “In case you haven’t noticed, this is war!” Expect snickering throughout the theater at such dialogue.

There’s almost no explanation as to the grand scheme of the aliens. After taking us into the mother ship in the nonsensical finale, we have no better understanding of why this is happening. Sure, we see alien organisms gulping down human brains. But did they really travel hundreds of light years just to eat brains? Certainly, brain-munching aliens are a throwback to Atomic Era sci-fi pictures, but shouldn’t the rationalization be slightly more complex for modern audiences? And then there’s the final turn, which isn’t so much a development as an ineffective cliffhanger. The filmmakers suggest the likelihood of a sequel, which, given the low price tag and foreseeable profits, seems inevitable. Except, the absurdity of the last shot is bound to incite boos and catcalls more than anticipation for what happens next.

It seems as though Hydraulx made Skyline just to prove to Hollywood how much they can do with very little. In terms of special effects, you could argue they succeeded. Yet by confining the scope of their alien invasion to a single building, and giving us not one interesting character but several dull ones, the Brothers Strause accomplished the opposite in terms of story. While trying to prove a point to the industry that blockbuster budgets aren’t needed for sci-fi epics, the filmmakers failed in nearly every way that District 9, which had similar goals, triumphed. That film told a story in which the effects seemed secondary to a rousing narrative, whereas the opposite is true here. Story takes a back seat to explosions and flashy lights better suited for an effects reel on Hydraulx’s resume than any self-respecting audience.