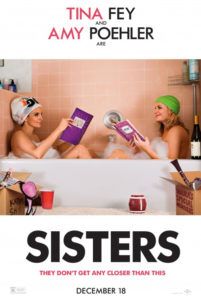 Sisters exists on the notion that audiences can’t get enough of Tina Fey and Amy Poehler, no matter how far down they lower themselves. The R-rated comedy offers no end of raunchy humor and swearing, as well as ad-libbing galore from the two former Saturday Night Live castmembers. Last seen together on the big screen in Baby Mama, or hosting the Golden Globe Awards ceremony on the small screen, Fey and Poehler play off each other with their instant charm and often adorable goofiness. But, in keeping with the Hollywood norm of today’s comedies, the lowbrow brand of humor in Sisters tries to balance itself with an equal measure of heart (it’s going for Bridesmaids). The proven formula drags on and fails to produce an ample amount of laughs, or Fey and Poehler’s signature wit, to make the two-hour effort worth more than a lazy afternoon viewing.

Longtime SNL writer Paula Pell is responsible for the script, relying on a number of story clichés that provide countless opportunities for Fey and Poehler to act silly. Pell’s script also provides a role reversal for the two stars. For example, in Baby Mama, Fey played the uptight thirtysomething and Poehler played the reckless nitwit. But here they’ve flip-flopped—this time around, Fey plays Kate, an impulsive single mother of a teenage daughter (Madison Davenport), who’s more responsible than her hothead mother. Kate partied hard as a teen and never quite grew up. Kate’s sister Maura (Poehler) has always been the responsible one. Recently divorced, Maura is a kindly, quite lonely straight-arrow, the opposite of her sister.

When Kate and Maura’s parents (Dianne Wiest and James Brolin) inform their children of their plans to sell the family home in Florida, the sisters immediately fly to Orlando to change their parents’ minds. But there’s already a “sold” sign in the yard when they arrive, and they’re told to clean out their old rooms to prepare for the sale. While reminiscing about old times and reading their former diaries, Maura suggests she missed opportunities to unwind in her youth. Kate insists they throw one last ’90s-style rager in the house, and invite all their old friends from high school via Facebook, allowing Maura to let her “freak flag fly”—there’s even a hunky neighbor (Ike Barinholtz) who provides the potential to do just that.

About halfway into Sisters, it becomes nothing more than a party movie. Everyone’s drinking and dancing to the thumpin’ music. John Cena plays a buffed-up drug dealer who ups the party to 11 (cue the annoying subplot where Bobby Moynihan’s bad party guest character sniffs something like cocaine, thinking it’s Stevia, and goes bonkers). Kate and Maura’s fortysomething friends all let loose, having left their kids at home. But most of Kate and Maura’s friends are also Fey and Poehler’s fellow SNL alum. Rachel Dratch shows up as a former classmate who has since turned into a lonely old weirdo. Maya Rudolf plays a former mean girl who’s become a snooty real estate broker, overacting every moment. Kate McKinnon shows up too as a stereotypical butch lesbian.

Directed by Jason Moore (Pitch Perfect), Sisters is one of those comedies that ends with a series of outtakes over the end credits, and by the looks of it, the talent had more fun shooting the film than we did watching it. Of course, Fey and Poehler are funny and their onscreen presence is likable, but the script feels dull and predictable, and the wild party antics seem beneath the film’s stars. Indeed, 30 Rock and Upright Citizens Brigade had more wit and humorous innovation in one episode than both hours of Sisters. Sadly, neither Fey nor Poehler contributed to the script (they did, however, executive produce). As a result, the best jokes involve either poop or a man getting a ballerina music box lodged in his rectum. It’s none too memorable.