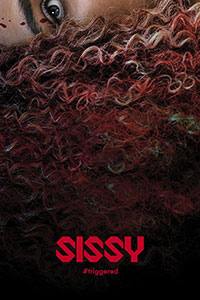 Sissy could be seen as blunt force trauma satire, except that Aisha Dee sells every moment of her performance. Dee plays Cecilia, an influencer and unqualified “mental health advocate” with a considerable social media following. In her videos, set against a pink backdrop illuminated by a ring light, Cecilia preaches New Agey wellness solutions, which she occasionally interrupts to hawk her sponsor’s exfoliating masks. But when she’s not delivering episodes with names like “Making Friends with Hyperventilation,” she’s alone and hurting from a deep-seated trauma. All of her manufactured composure and inner harmony masks something disturbed that emerges in this Australian horror-comedy—an alternately shocking and funny good time. Sissy marks the second movie from 2022, after Not Okay, to portray influencers as borderline psychopaths who care more about crafting their online presence and feeding on attention than having genuine relationships. The tone is similarly over-the-top and often hilariously dark. Yet, it relies on Dee’s ability to make Cecilia a sympathetic victim who goes to bloody extremes to stand up for herself.

When Cecilia bumps into her childhood BFF, Emma (Hannah Barlow), it’s an awkward reunion. The enthused Emma calls her by an old nickname, “Sissy,” and Cecilia corrects her. But it’s all smiles when Emma invites her old friend to a “hens weekend” in the country. For Cecilia, who’s solitary apart from her fanbase, the invite brings back the intense bond that she and Emma once had. But almost immediately, Cecilia finds she’s an outsider in Emma’s friend group. Worse, upon their arrival, she discovers the summer house they’re staying in belongs to her former schoolyard bully, Alex (Emily De Margheriti), who gave Cecilia the titular nickname—a wrinkle Emma probably should have considered. The dynamic between the three is even more complicated, but viewers should discover how for themselves. Suffice it to say, the tension is palpable. With her social and situational anxiety buzzing, Cecilia finds she must retreat to the bathroom and repeat the same mantra with which she ends her videos: “I am loved. I am special. I am enough. I am trying my best. We all are.” What registers as nurturing on her videos sounds like desperate, about-to-crack reassurance when she’s alone.

Co-written and directed by Barlow and Kane Senes, Sissy builds in the first half with ominous warning signs. Cecilia hits a kangaroo on the road to the house, resulting in a grisly mess that shows how far the filmmakers will go when depicting bloodshed. Cecilia also watches old home movies and dreams of her relationship with Emma when they were 12-year-old girls. Some are cheery scenes, such as when they make a pact that “No matter what happens, we end up in a nursing home together.” These endearing moments, combined with Dee’s sympathetic screen presence, make it easy to get swept up in Cecilia’s perspective. But other moments suggest something darker—shedreams of her childhood self, covered in blood, crying, “I’m not a sissy.” It doesn’t help that Cecilia maintains an unhealthy, even delusional relationship with social media. When faced with Alex, who continues to call her “Sissy” and remains unkind—though perhaps not without good reason—Cecilia escapes to check her phone and soak up likes and comments for validation. The filmmakers use abrupt cuts to Cecilia’s capillaries opening and eyes dilating in euphoric bliss, suggesting her addiction to social media engagement and displacement of reality.

While the movie remains a broad satire and social commentary, it also effectively builds Cecilia’s character from her subjectivity, gradually layering details that become important later on and, ultimately, escalate to bloody horror. When Emma’s friends learn the truth about what happened between Alex and Cecilia when they were preadolescents, they turn on the odd woman out, announcing, “Sissy’s canceled!” The pressure, isolation, and bullying tip the situation beyond recoverability. And even after Sissy reveals everything that happened years before, and that perhaps Cecilia’s mental state is even more fragile than we suspected, the filmmakers have shown us that Emma’s friends aren’t the nicest people in the world—and it becomes rather satisfying to watch them go down, often in creative ways. Barlow and Senes render their gory deaths with convincing, mostly practical effects that cause the viewer to gasp and gag. Cinematographer Steve Arnold shoots the on-location exteriors and suffocating interiors with cohesive visuals that look crisp yet subtly exaggerated to reflect the off-kilter emotions at play. Overall, it’s a top-notch production.

Sissy debuted at the 2022 Fantasia International Film Festival, and Shudder has picked it up for their horror-themed streaming service. Filled with jargon from “toxic” to “triggered,” the movie would make a fine pairing with this year’s Bodies Bodies Bodies—both feature characters who weaponize certain buzzwords to shield themselves from making any real connections. However bloody things get, Cecilia remains a tragic character whose desire to be accepted by Emma is misplaced. But by the time she realizes this, the body count has already started to compile, and there’s no other choice but to commit. She’s a bit like Tom Ripley from Anthony Minghella’s The Talented Mr. Ripley (1999) in that way. Thanks mainly to Dee’s strong performance, Sissy‘s remarks about social media reveal that people have complex personal histories and, to borrow a hip phrase, remain works in progress—and so their worst post or action isn’t the summa of their identity. Regardless of the movie’s ambitious themes, it’s perhaps more effective as entertaining horror propelled by convincing characters in heightened situations.