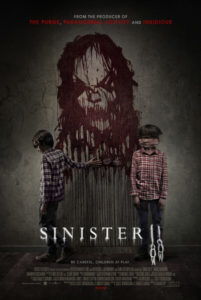 Children are creepy. Filmmakers know this to be true. Why else would they keep making horror movies in which eerie youngsters sing nursery rhymes or appear out of nowhere in the dark? Children, especially “gifted” ones, often attract evil spirits from the other side. Their very innocence incites some awful demon to possess a family member or haunt the house. And children always seem to find long-forgotten trinkets that contain the maligned soul of some monster. If you have a child, beware. Chances are they’re somehow responsible for bringing evil into your home. Don’t even get me started on ghost children—they’re the worst. At least, that’s what the horror genre has to say about it. Take Sinister 2, which follows two nine-year-olds who can see dead people; specifically, a group of ghost-children, all former murderers carrying out the bidding of an ancient demon, absurdly named “Bagul” (pronounced “baa-ghoul”).

Director Scott Derrickson’s original Sinister (2012) benefited from the intense performance of its star, Ethan Hawke, to rattle its audience. Nearly the entire movie followed Hawke’s nervy character, a true crime author, as he investigated a string of Bagul killings, but he kept being interrupted by an endless procession of eerie sounds in the dark, which of course he would investigate without a light. That is, until he and his family became victims themselves. Derrickson didn’t direct the sequel and has moved on to bigger and hopefully better things (Marvel’s Dr. Strange), but he stayed on as co-writer and producer of Sinister 2. Ciarán Foy (Citadel) helms a script authored by Derrickson and C. Robert Cargill. It follows the original’s awkward deputy sheriff (James Ransone), still unnamed, now a private investigator, as he picks up where Hawke’s character left off.

Ransone’s character has been burning down houses where Bagul victims once lived, hoping to stop the cycle of murders. Because with each new inhabitant, Bagul corrupts the children and forces them to shoot home movies of themselves murdering their family, and then Bagul takes the murderous child for himself. The newest residence on his list is an abandoned farmhouse next to a dilapidated church. When Ransone arrives to burn it down, he finds it inhabited by a woman and her two sons. Courtney (Shannyn Sossamon) resolved to hide out on the property with her twins Dylan and Zach (Robert Daniel Sloan and Dartanian Sloan) after escaping their abusive father, a well-to-do shitkicker named Clint (Lea Coco). The question we ask ourselves for most of Sinister 2 is, “Which of the twins will do the killing?”

Along with a healthy sampling of weird sounds in the dark, followed by predictable jump-scares, Sinister 2 makes good use of freaky children. Dylan and Zach alone have their issues—the former sees dead people, the latter is a bully-cum-psychopath. But there are also five ghost children who tell Dylan that in order to stop his gruesome nightmares, he must watch their bloody home movies. Turns out Zach can see dead people too, and he’s jealous the ghost-children have chosen Dylan instead of him. So Zach begins ruthlessly bullying Dylan to get on the ghosties’ good side, not to mention Bagul’s good graces. Meanwhile, the former deputy tries to protect Courtney from her domestic issues with Clint. And everything goes south, Bagul style.

Still quite silly is the resident monster of the Sinister movies. Though he’s supposedly a Babylonian deity, he looks like Sam from Trick ‘r Treat and Glenn Danzig had a baby, who then grew up to be a Marilyn Manson wannabe circa 1996. He requires his subjects to use an old 8mm film camera to record their killings, if for no other reason than if they used modern digital cameras, Sinister would be too much like Paranormal Activity, and if they used a VHS camcorder then it would be too much like V/H/S. Each home movie is recorded with scratchy audio on a phonograph, which sounds vaguely like Nine Inch Nails by way of The Exorcist. It’s all very standard contemporary horror imagery, with only the ghastliness of the murders to set them apart. The sequence where trapped rats eat through the bellies of victims to escape scorching heat is extremely disturbing.

Although Ransone’s goofy expressions and occasional humor have a lighter and more accessible mood than its predecessor, Sinister 2 contains a familiar set of tiresome horror movie gimmicks. That alone isn’t enough to spoil a movie. The problem here is Sinister 2 isn’t very well made. The script resorts to clichés ranging from a redneck domestic abuse situation to evil children, and it does nothing interesting with them. It does little with the Bagul character except give us another round of victims, like any slasher movie franchise. Foy’s direction is hokey. The production itself looks cheap. Blumhouse Pictures, Jason Blum’s low-budget horror factory, devoted a mere $10 million to the budget, which will easily turn a profit. Unfortunately, that means audiences have to contend with cartoony-looking CGI fire and hokey ghosts. Overall, this is D-level material, and the only genuine shock it delivers is that it didn’t debut on VOD or Netflix.