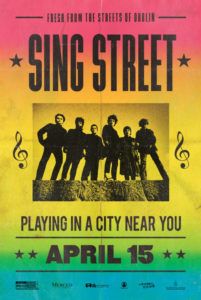 To discover who you are, sometimes you have to imitate others. There’s a great line in Richard Linklater’s Waking Life about the importance of meeting new people, because, and I’m paraphrasing here, “Someday you’ll meet yourself.” That philosophy drives Irish filmmaker John Carney’s latest, Sing Street, about a group of Catholic school boys in Dublin who form a band in their living-room in 1985. Though it boasts a fun soundtrack of synthpop songs from the era—by the likes of Duran Duran, The Jam, The Cure, Joe Jackson, and others—the songs by the titular band prove just as catchy and entertaining, if not more so. It’s quite underwhelming when a film about making music features original songs that everyone in the story goes gonzo over, but then the songs aren’t that memorable. Sing Street doesn’t have that problem in the slightest.

However, this was the error of Carney’s last film, 2013’s Begin Again, starring Mark Ruffalo as a music mogul who sets out to produce an album by Keira Knightley’s character with the help of his daughter (Hailee Steinfeld). The songs were bland and forgettable, whereas those in Sing Street are playful and make the viewer want to start downloading the soundtrack before they leave the theater. It reminded me of how I felt after watching Once, Carney’s 2007 indie breakout that won the Academy Award for Best Original Song. Perhaps Sing Street and its songs are more effective because Carney writes a somewhat autobiographical work. The director grew up in Dublin during the time in which the film takes place, and even attended the Christian Brothers School called Synge Street CBS. Carney, too, played in a band and made music videos like the characters in the film.

Wanting to impress a mysterious older girl named Raphina (Lucy Boynton), fifteen-year-old Conor (Ferdia Walsh-Peelo) decides to form a band. Conor’s interest in music has been steadily formed by his monologuing brother Brendan (Jack Reynor), a college dropout who admits he smokes too much pot to live up to his own musical potential. Along with Brendan, Conor, who dabbles in songwriting, watches Top of the Pops each week and determines his band’s sound will imitate Duran Duran’s “Rio”. He wrangles a motley crew of outcasts from his school, including the rabbit-obsessed Eamon (Mark McKenna) who can play any instrument put before him, and forms “Sing Street”. They borrow heavily from the pop styles seen on television, or from whatever record Brendan lends from his comprehensive vinyl collection, and remain determined to play original music instead of covers. At school, their fashion choices change with their musical influences, from the puffy black-mousse-hair of Robert Smith to the self-conscious rebellion of eyeliner.

Although Sing Street could have easily been a successful nostalgia trip and nothing more, Carney shows us where Conor derives inspiration for his often angsty but colorful lyrics. At school, Brother Baxter (Don Wycherley) insists Conor conform to school policy regarding shoe color, and even gets abusive trying to remove Conor’s makeup. At home, Conor’s parents (Aidan Gillen and Maria Doyle Kennedy) are on the verge of divorce, as his mother has long felt unfulfilled and has fallen in love with another man. Meanwhile, Raphina, who talks of becoming a model, spends her time with an older guy who promises to run away with her to London. Ultimately, Sing Street features several characters with the yearnings of people who feel trapped. Some of them remain dreamers, wishing they had made different decisions in life, while Conor and his band refuse to remain static and unfulfilled.

Watching Conor and his band shoot their homemade music videos on VHS and create their catchy sounds is delightful, often hilarious, and eventually quite endearing. There’s a Be Kind, Rewind quality to the entertainment value. Films about youngsters creating music and finding themselves in the process (like Linklater’s School of Rock) are generally infectious, especially if you happen to enjoy the music they’re making. Adding music videos to the mix—enhanced by Brendan’s belief that music videos are the ultimate art form—brings an appreciation for everything Sing Street has to say about following your passion to create. Carney wrote the music along with Gary Clark, while Becky Betham serves as music supervisor (she hysterically slips in M’s “Pop Music” during a school dance). Cinematographer Yaron Orbach captures the spare quality of Dublin in the 1980s, and probably helped the band’s resident manager-cameraman (Ben Carolan) shoot their videos.

If there’s a major fault in Carney’s film, it that his romanticism carries the finale on too long. There’s a perfect point on which Sing Street should have ended in a car, but instead, it ends on a boat during a storm, relying on some distractingly bad CGI. Nevertheless, as suggested, the film’s music is outstanding; it carefully walks the line between parody and earnestness. At times the lyrics are comic, but they’re also sweet and sincere, and never an all-out spoof. The band’s earlier New Wave-inspired “Drive It Like You Stole It” stuck with me, and so did “The Riddle of The Model” and “Girls”, while the later songs seem less branded by the ‘80s—at least, the more popish sound we’ve come to associate with the decade. Overall, the film recalls a stellar album with just a mediocre song or two, but the emotional resonance of the material as a whole far outweighs its few shrug-worthy tracks.