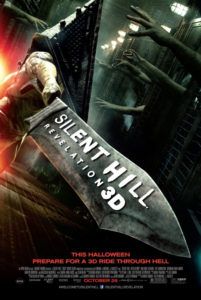 If you’re ever on a Sunday drive and find yourself approaching a foggy town called Silent Hill, turn around and go home. You won’t like it. And if you’re looking for something to watch one evening and come across Silent Hill: Revelation 3D, do yourself a favor and pick something else. You won’t like this either. A sequel to the 2006 original, the second adaptation of the popular videogame series is just as impenetrably plotted as the first, offering no end of gory monsters and laughably ill-conceived jump scares. (Among them is a Pop-Tart bursting from a toaster. Yes, really.) Writer-director Michael J. Bassett has made a movie only die-hard gamers could love. Everyone else will feel a combination of bafflement and disgust toward this grisly procession of horror clichés—all accompanied by numerous, silly, in-your-face uses of the 3D device.

Bassett’s script picks up several years after the first, where the seemingly sole survivor Christopher (Sean Bean) has since located his missing adopted daughter Sharon. She’s now eighteen, renamed Heather, and played by Adelaide Clemens (who could be Michelle Williams’ double). We learn through heavy exposition and flashbacks that Christopher, now renamed Harry, and Heather have moved from town to town for years, avoiding minions sent from the hellish town of Silent Hill to collect Heather for some ceremony, a horrific one, no doubt. With no memory of the previous film’s events, Heather suffers from waking nightmares where grotesque creatures appear and tell her to return to Silent Hill. And before she has time to settle into her new town and warm up to Vincent (Kit Harrington), a likewise new student in her class with his eyes on the new girl, Heather discovers her father has gone missing and “Come to Silent Hill” was written in blood on a wall in her home.

Armed with a solitary pistol and Vincent at her heels, Heather resolves to drive to the ash-covered Silent Hill and rescue Harry. In the process, she faces an ambiguous cult called the Order of Valtiel, who wants something called the Seal of Metatron, which is in her possession. Gamers may be familiar with such grandiosely-named McGuffins, but for everyone else, the motivations behind these characters are so poorly explained that we’re never quite sure what the demon-esque inhabitants of this town want. It’s enough that they’re sinister and ugly. It only gets worse when Heather and Vincent engage in high-school level dialogue about reality and perception. The movie desperately wants to bend minds but instead twists only our patience. Like levels on a videogame, whole scenes proceed without purpose, such as an episode where Heather faces a spidery mannequin thing that spins webs and turns humans into plastic dummies. And as Heather wanders about the decaying town, Bassett fills dead space with more monsters and gore that serve little function within the plot beyond their gross-out value.

It’s a typical horror setting: every light flickers with uncertain electricity, every door screeches when opened, and all metal looks rusty and decayed. Heather tiptoes down empty corridors and hallways littered with debris and smatterings of dried blood on the walls. By the time we learn what any of this means, the explanation in the finale, boasting Carrie-Anne Moss as a Valtiel leader, defies audiences to understand it. Bassett seems more interested in using formulaic, but no less disturbing imagery to unsettle the viewer. Heather braves Silent Hill’s local mental hospital and carnival circus—standard nightmare locales—the former populated by faceless nurses and screaming lunatics, the latter filled with clowns and stuffed prize bunnies stained with blood. You be the judge on which is worse.

All the while, Bassett uses his intermittent scares to remind us why the 3D device is such a waste in the wrong hands. Knives and swords come thrusting at the viewer, as do monstrous faces, none of which evoke the desired jolt reaction. The biggest question remaining has nothing to do with the plot. Moviegoers will stop caring about what happens in Silent Hill: Revelation long before it offers up any clarification. No, the burning question here is why actors like Bean, Moss, Malcolm McDowell, Deborah Kara Unger, and Radha Mitchell (reprising her role from the original in a brief flashback) have reduced themselves to such lows. Clemens does a fine job of screaming at frightening monsters, but she’s trapped in a movie that never progresses beyond the series’ videogame mechanics and seems to exist only to purvey an endless chain of gory moments. This is unfortunate, because, despite the inanity of it all, there’s something behind the concept and imagery of Silent Hill that could make a great horror experience. Unfortunately, both 2006’s Silent Hill and Bassett’s film have yet to produce that experience.