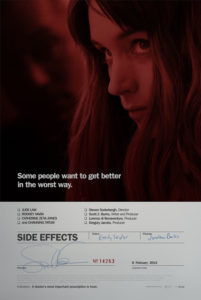 If you’ve suffered from depression or even just the blues, and you’ve seen an advertisement for the latest anti-depressant and felt a sense of possibility that it might all get better, that your debilitating hopelessness might be relieved, you’re not only a victim of advertising, but Side Effects will work on you better than most. Those soothing commercials with their unobtrusive music present images of sad patients unable to get out of bed when it’s raining, and later they’re jogging on a sunny day after they take the drug. Are we to believe serotonin-specific reuptake inhibitors (SSRI) also change the weather? Or consider those cartoon rainclouds pouring down a shower of sadness on the drug’s animated spokesperson. Pop a pill, and magically the Sun emerges, sporting shades and a smile no less. Meanwhile, a gentle-voiced announcer relates how individual results may vary; some users may experience enhanced feelings of suicide, loss of sex drive, nausea, sleeplessness, and a laundry list of other horrible consequences that occurred in testing.

What may be the last film by director Steven Soderbergh is also another of his discerning looks into a capitalist trade with dubious undercurrents. Reteaming with screenwriter Scott Z. Burns, Soderbergh explores the field of psychopharmacology, considering, with the same discriminating eye as their previous collaborations, the problems inherent to an industry designed to help people but whose profit margins and practices are suspect. Their first film together was The Informant! (2009), a wild comedy about the complex man who exposed a lysine price-fixing conspiracy across several food additive companies. Next came Contagion (2011), a brilliant thriller in which we see how easily a pandemic could spread, the defenselessness of medical researchers and public health officials, and how drug manufacturers might even profit from such an outbreak. Soderbergh has long been interested in capitalist heads turning a blind eye to appalling truths because it suits them, such as ineffectual governments in the war on drugs in Traffic (2000) or the company that turns a blind eye to water contaminated by hexavalent chromium in Erin Brockovich (also 2000). 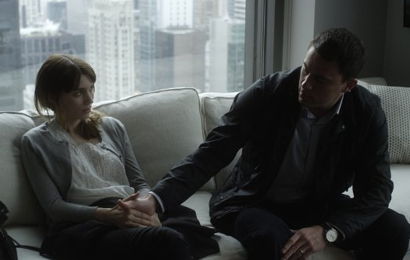 Psychopharmacology, the study of drugs and how they influence behavior, mood, and thought, is just the beginning of Side Effects, a crafty picture that’s an impressive swan song for the genre-hopping director if indeed this is Soderbergh’s last theatrical release, as he insists. Just as he and Burns’ last two films together blended the notion of corporate deception with another genre element—spy-comedy in The Informant! and panoramic 1970s-style ensemble thriller in Contagion—their latest contains elements of a Hitchcock-inflected whodunit. But perhaps that’s saying too much already. Before you read further, know that a lot of plot detail is revealed in this review, far too much for a virgin viewer. Here’s a film on which you shouldn’t read a word prior to seeing, but afterward, you’ll want to read everything you can about it. Consider this a warning to stop reading if you haven’t seen it yet, and when you’re talking about it after, make sure not to disclose any secrets, lest you receive a good thwapping by the gods of well-kept movie secrets.

Under his usual pseudonym Peter Andrews, Soderbergh serves as cinematographer and opens his film with a shot of Manhattan, represented by his oft-employed digital camera through soft, muted tones. Everything is similarly subdued for Emily Taylor (Rooney Mara), a mousy and frail-looking New Yorker whose outward inexpressiveness suggests her hazy, chemical-imbalanced despair. Emily seems to exist in a fog, and no doubt her disposition is shaped by the return of her husband, Martin (Channing Tatum), who’s home again after a four-year prison sentence for insider trading. Emily’s inability to return to “normalcy” with the unrepentant and materialistic Martin only elevates her feelings. After a botched suicide attempt in a parking garage, she agrees to see psychiatrist Dr. Jonathan Banks (Jude Law), who, after some unsuccessful tests with other medications, prescribes a new antidepressant called Ablixa. Her mood improves instantly, except the drug’s side effect of deepened sleepwalking leads to Emily’s late-night food preparation while unconscious. One night, Martin tries to wake her and, in her sleep, she stabs him to death.

During the subsequent trial and investigation, the film’s focus shifts onto Banks, who sees how the law treats such cases: either Emily is guilty of a motive-less murder committed in an unconscious state, or she’s the victim of Ablixa, in which case Banks is unfairly railroaded for having prescribed the drug. Emily is found innocent on the grounds of temporary insanity and released to an institution for a period of examination, and meanwhile, Banks dwells on how unjustly his life was ruined and conducts an investigation of his own, unable to accept that this could all just be a bad luck occurrence. At this point, Side Effects unfurls like a drama about The System being set up in such a way that a unique situation like this one destroys everyone involved. Banks’ finances and practice suffer, as does his reputation and relationship with his wife (Vanessa Shaw). We even suspect Banks’ culpability when reports about him allegedly taking advantage of a former patient surface. Only after an hour or more of screentime does Banks suspect a double-cross and an elaborate murder scheme, and the film’s tone shifts once more into a suspenseful, intelligent potboiler where everything we’ve seen prior to this point was, unbeknownst to us, clues to a murder mystery. All at once, we can’t wait to watch the film again to see what hints we missed. 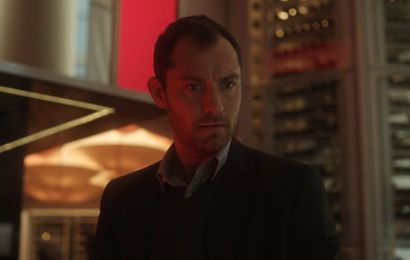 Just as Soderbergh maneuvers through the film’s varying genres, his actors transform before us in miraculous ways to meet the requirements of the story’s many layers. Just as she did in The Girl with the Dragon Tattoo, Mara superbly displays a convincing meekness that later alters into a kind of monstrosity when it’s revealed Emily has masterminded a plot with her former therapist, played by a deliciously sinister Catherine Zeta-Jones. Law has played both heroic roles (Cold Mountain) and deplorable but charismatic two-timers (The Talented Mr. Ripley) before, and because of his capacity for both types, he’s perfect at making us doubt Dr. Banks at the precise moments we should, whereas later he becomes hell-bent on proving himself innocent, and later still wonderfully devious and applauded in his sweet revenge. Of Tatum, it must be said that Soderbergh has made the best use of this usually one-note actor, whose presence in the director’s 2012 projects Haywire and Magic Mike showcased his under-the-surface talent.

Throughout, Soderbergh keeps the viewer involved and never sure what to expect, while every twist and turn comes as a surprise, informed and enhanced by the tricky film’s critique of the pharmacological industry. If one fault must be assigned, it’s that, in retrospect, we feel silly for not having guessed the outcome. But then, the film’s clever and intentionally vague marketing campaign successfully avoided any allusion to a murder mystery; had we gone in knowing what genres the film occupied, our reaction might be different. Fortunately, that’s not the case. The level of immersion Soderbergh perpetuates throughout the film’s varying genres remains a testament to his skill. Side Effects isn’t the last new Soderbergh product we’ll ever see, though: His Liberace biopic starring Matt Damon and Michael Douglas, called Behind the Candelabra, will be shown on HBO later this year; and he’s re-edited and redubbed in German (!) his little-seen paranoid thriller from 1991, Kafka, for release on video also in 2013. After that, there’s nothing on the pipeline for this prolific director, who usually juggles two or three projects in a year. If this does end up being his final film, Soderbergh has left us with a small masterpiece of the genre that leaves us hoping retirement is impermanent.