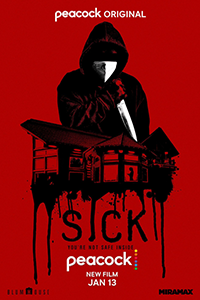 At the height of the COVID-19 pandemic, amid mandatory quarantines and mask requirements, I remember reading about college spring break parties that became superspreader events. My reaction usually included words like “irresponsible” and “shitheads,” and probably some other not-so-nice stuff. Although I felt frustrated with coed parties and family members who didn’t take advised precautions, my disdain was limited to some grumbling. In Sick, the partying coeds have more to worry about than catching COVID; they have a knife-wielding killer in a black hood chasing them. From the mind of Kevin Williamson, writer of Scream, and his co-writer Katelyn Crabb, comes a similar setup to last year’s Bodies Bodies Bodies—where twentysomethings hole up for a hurricane party that becomes a whodunit. Here, in early April of 2020, when 97% of the country was under pandemic restrictions, two undergrads resolve to wait out their stay-at-home orders at a cabin, only to find themselves thrust from an outbreak movie into a slasher movie.

Sick isn’t as ironic or self-reflexive as Williamson’s Scream movies, but it’s directed with intensity by John Hyams, helmer of 2020’s sharp kidnapping thriller Alone. Working with a similarly small budget and minimal cast, Hyams draws from Wes Craven’s book of tricks. The movie’s black-clad and masked killer with a hunting knife chases our two leads, Parker (Gideon Adlon) and Miri (Bethlehem Million), at full sprint around Parker’s unused family cabin—though, it will look like a mansion to most of us, what with its vast property and square footage appropriate for a resort lodge. Shot in Utah, lending the film a picturesque backdrop, the production’s setting fits into this portrait of privileged and inconsiderate college students. And the location supplies an attractive environment for the movie’s chase sequences, which bristle with energy, captured by cinematographer Yaron Levy in immersive extended takes that rattle the frame in their amped-up speed. The coeds run up and down stairs, climb out windows, and hide in the dark, and it recalls those fast-paced sequences in the earlier Scream movies.

Sick also features a prologue reminiscent of Scream, albeit without the star power of Drew Barrymore or some other recognizable face. Joel Courtney plays Tyler, a college student shopping at his local grocery store, hoping to find essentials like toilet paper and facial tissues. But at this point, not much was known about COVID, and there was a touch of panic in the air, leaving shelves empty. However familiar this situation may feel, the filmmakers get some of the details wrong, such as the availability of at-home testing kits, which play a crucial role later in the movie (they didn’t reach the public until several months after April 2020). In any case, while in the checkout line, Tyler receives anonymous texts from someone asking, “Wanna party?” He’s interested, despite the quarantine, but the increasingly creepy texts soon worry him. When he returns to his apartment, a sneaky intruder attacks, leading to a brutal pre-title kill. 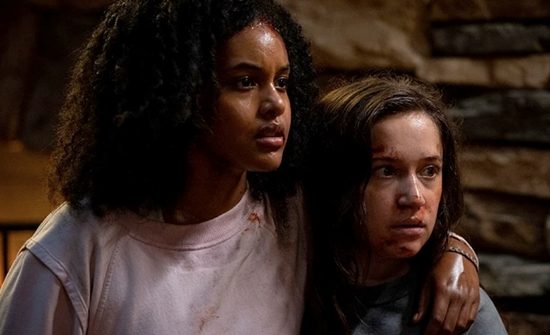 The story picks up with Parker and Miri, who head to a secluded family getaway to wait out the pandemic shutdown. Miri’s strict mask policy clashes with Parker’s defiance of protocols and belief that they’re “too young to get COVID.” After all, she doesn’t have any symptoms. Her lack of concern about the risk to other people and general disinterest in safety precautions may present a challenge to some viewers. If she doesn’t care about others, why should we care when the eerie texts suggest that someone’s watching them and they could be in danger? The characters almost harken back to the mean-spirited days of 2000s horror movies, populated by detestable characters you couldn’t wait to see chopped to bits. Parker and Miri are more likable than, say, Paris Hilton in 2005’s House of Wax, but only just barely.

Still, as Sick continues to unfold with mounting details about Parker’s lax attitude, her casual hookup DJ (Dylan Sprayberry) arrives unannounced with a bone to pick about Parker’s behavior at a recent “fuck COVID” party, seen by many in an Instagram post. Adlon’s spoiled and bratty character tests the viewer’s sympathy, yet the performer does a fine job of keeping us on her side, especially after the terror advances into a series of cat-and-mouse chases around the lodge and surrounding area. It doesn’t help that Parker also makes a lot of stupid decisions throughout, such as shuffling on a wooden dock and trying to avoid a knife that emerges between the boards, when she could have just stood up. But, I suppose, panicky decisions come with the territory.

Distributed in part by Blumhouse and exclusively on Peacock, Sick probably could have made a healthy box-office take had the movie been released in theaters—and many of the jolts and plot turns would have been fun to see with an engaged audience. Hyams directs with a knack for abrasive cutting by editor Andrew Drazek, making each stab, bloody geyser, or moment of impact feel tactile. And regardless of the small cast, the movie leaves plenty of room to add to the body count. It’s hinted at by the clever sound design, when the camera observes a conversation between Parker and DJ from multiple angles, some from inside and others from outside. Another film might have eliminated the ambient noise from the various spots. But Sick has an intentional reason for switching between shots and keeping the noise from each angle, suggesting that each position represents an anonymous watcher.

While Sick could be enjoyed as an efficient, mindlessly entertaining, 83-minute horror yarn, Williamson and Crabb offer a twist on the traditional slasher morality. Intriguingly, the movie’s killer doesn’t punish those who have sex, like so many entries in the Friday the 13th and Halloween franchises. Rather, the killer in Sick targets those who remain defiant of public health guidelines. Because of this, the resident victims, Parker above all, may prove rather unsympathetic by the end, even while Adlon and Million are likable enough to remain engaging. Sick is admirable for how it mines a recent issue to incite strong reactions, and for how its complex morality challenges our sympathies. Then again, no matter how you feel about pandemic safeguards, the killers ultimately reveal themselves to be deadly extremists. Best of all, Hyams propels us from one pulse-pounding moment to the next, keeping us rapt, even if Parker is a shithead.