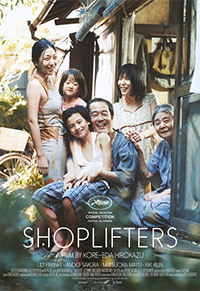 A Dickensian tale of makeshift families and petty thievery, Hirokazu Kore-eda’s Shoplifters is a finely tuned investigation of relationships. “Blood is thicker than water,” some say, relying on ancestry and lineage to shape their identities. Others lament, “You can’t choose your family.” But it turns out you can, and those who create their own families experience something more deep-rooted than standard bonds. Kore-eda’s film situates a group of poor vagabonds and criminals under the same roof and, with empathy and understanding, demonstrates that a family is how you define it. Kore-eda’s story is inhabited by characters who rename themselves, creating their own rules and justifications for how they live their lives. They realize that blood bonds often disappoint. However, the provisional family in Shoplifters is not without its share of disenchantment and personal trials; like most families, it’s an imperfect assemblage of human flaws. But its construction by choice rather than obligation lends the group a particular poignancy, imbuing it with an import at least equivalent to, if not higher than, that of blood relations. Through studied observations of behavior and subtle formal beauty, Kore-eda finds beauty and tenderness in otherwise strange conditions.

The improvised Japanese family at the center of Shoplifters lives in a hut that belongs to Granny Hatsue, played by Kirin Kiki, the matriarch of Kore-eda’s Still Walking (2008). Five people inhabit the cramped space under Granny’s roof—a few rooms, a bath, and a small kitchen—none of them related by blood. Yet, each trust and accept one another more than most genetic relations do. If there’s a fatherly Fagin in the bunch, it would be Osamu Shibata (Lily Franky), who teaches the pre-adolescent boy Shota (Jyo Kairi) how to pilfer food from grocery stores without being spotted. “Whatever’s in the store doesn’t belong to anyone yet,” he tells Shota. An elaborate series of hand signals, nods, and distractions lead to a successful haul of food for their clan. To be sure, Osamu isn’t sending children out to do his sleight-of-hand bidding or receive stolen goods for personal profit; it’s a shared experienced carried out for their family’s mutual survival. But Shota hasn’t completely converted to Osamu’s way of life, nor has the young boy accepted Osamu as his temporary father. Despite pleas to do so, Shota refuses to refer to Osamu as his parent. 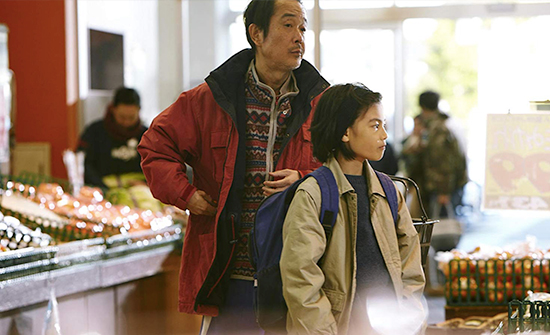 On the way home from a successful day of minor larceny, Osamu notices a young girl seated outside of her family’s front door, clinging to a rail. She’s a curious sight since it’s dark and cold out. Has she been abandoned? She doesn’t speak, but she’s nearly frozen. Osamu resolves to take her back to the bungalow, where they notice that the five-year-old, whose name is Yuri (Miyu Sasaki), has scars all over her arms. They question, albeit briefly, the ethical and legal implications of their actions, worrying that the authorities might search for her. Have they kidnapped her? Decidedly not, they resolve, since they’re not asking for a ransom. Their concerns prove somewhat unfounded, however, after two months pass and the neglectful, abusive parents still haven’t filed a missing persons report—an indication that they never wanted Yuri in the first place. In the meantime, Yuri becomes a member of Granny’s family, while the viewer suspects that everyone in the bunch has arrived in this hut under similarly unromantic, even tragic circumstances.

This family has all the components of three generations living under one roof, working to support the whole, but none of them have genuine family ties. Take the twentysomething daughter of the family, Aki (pop-star Mayu Matsuoka); she works at a sex booth, where she isn’t asked to remove her clothes but she isn’t exactly doing savory things for her clientele. Osamu’s wife, Nobuyo (Sakura Ando)—who claims that her husband is like an old goat that no longer requires sexual attention, a viewpoint that becomes almost comical when the origins of their relationship are later revealed—works two jobs, in a laundry and on a construction site, and yet neither pays well. At the laundry, she’s forced to take part in a workshare program that means her hours are cut to allow another worker time on the clock. Everyone gets paid less; everyone stays poor, and no one wins. At home, Nobuyo and Granny alternate caretaker duties, cooking and tending to Yuri’s wellbeing. Kore-eda’s crafty inclusion of such elements is part of his larger critique of Japanese society, which deprives families, forcing those without families together. Nevertheless, he finds something affecting within otherwise pitiless social conditions.

It’s implied that everyone lives with Granny because she has a reliable source of income drawn from her late husband’s pension; though, that proves false, as do most assumptions and pretenses about the characters in Shoplifters. Granny siphons her income from the adult children of her late husband and his mistress; Granny uses this disgrace to eke sympathy, and regular payments, from them. Osamu and Nobuyo were never married, and the shocking situation in which they came together is one of many rather macabre details in the film. Consider how matter-of-factly everyone handles a death among their temporary clan; they hide the body so as not to be discovered by authorities. However morbid their behavior, their devotion to maintaining their family is touching. Even so, Kore-eda never treats these discoveries and developments like grand twists in a plot. He gradually alters our perspective by revealing small pieces of information, while immersing the viewer in his characters’ subjectivity. 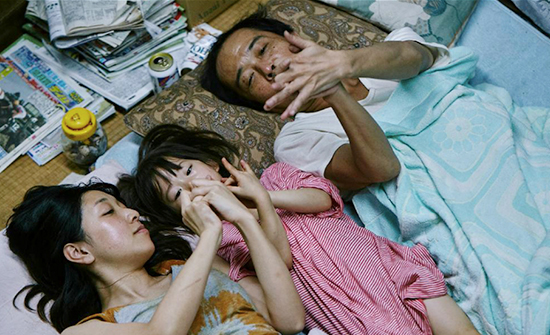 Families, most often shattered and displaced, remain a constant presence in Kore-eda’s cinema. Although he began as a documentarian, the Japanese director’s first drama from 1995, Maborosi, focused on a woman whose husband kills himself, leaving behind a devastated family. With After Life (1998), he incorporated a spiritual element, where the recently deceased must choose a single memory from their former lives as a memento, causing some self-examination amid the characters about the quality of their past relationships. Whether he uses fringe genres to explore families, as he often does, or settles into the quiet, measured looks at human drama—found in Still Walking; Like Father, Like Son (2013); Our Little Sister (2015); and After the Storm (2016)—Kore-eda’s most prevalent theme is not just family, but the fractured family. Fortunately, he does more than showcase such dynamics; he deconstructs, reassembles, and challenges traditionalism with incredible empathy. After all, Shoplifters is a tender film about a family comprised of thieves, murderers, kidnappers, scammers, and liars.

Kore-eda delivers at once severe and sensitive reflections through Ryuto Kondo’s lyrical camerawork, which resists typical shaky-cam depictions of squalor. Never does the treatment devolve into a marked representation of social realism with its purposefully gritty aesthetic that assumes an on-the-streets vibe. Instead, Shoplifters was filmed with the understated precision of a master, a quality recognized earlier in 2018 when it won the Palme d’Or at the Cannes Film Festival. Kore-eda’s eye has often been compared to that of Yasujiro Ozu, whose penchant for an unmoving camera and deceptively simple framing transform his work about the family into uncommon portraits. Though Kore-eda’s work inhabits the Ozu realm of family dramas, his subject matter is often more playful and unconventional, similar to that of Mikio Naruse, and his formal touches follow in elusive ways. By using a style vaguely reminiscent of the one employed by Ozu to investigate the traditional Japanese family, Kore-eda exposes the artifice of those traditions when he applies them to an alternative type.

Indeed, there’s a pervasive sense in Shoplifters that none of this will last, as though everyone involved, except perhaps Shota and Yuri, knows their make-do family must come to an end before long. Are they just pretending in the sense that they are joyfully playing house while they can? If so, it renders their unit all the more precious, as it’s self-made, and thus somehow more intimate and meaningful. At the same time, their bonds expose the trick of blood relations, how they can sometimes convince us of bonds that do not exist. It’s routine to feel like you have nothing in common with your biological family members but then feel closer ties to those who you’ve named your real family. A later sequence finds Granny’s people together at the beach, with moments of elation in their togetherness contrasted by the sudden, forlorn realization of how fleeting such moments will be in the shared life on display. It’s the kind of scene that students of dramaturgy and cinematic narratives know will be followed by a grim turn. But that doesn’t make the scene hollow or any less touching. The enduring lesson of Shoplifters is that family is what you make of it. Whether it’s a makeshift family or one born from blood bonds, they each require a certain blind faith that they will work. Sometimes that faith is betrayed. Sometimes, it’s all we have.