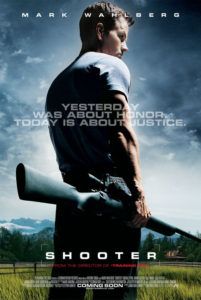 With all the possibility of Training Day’s greatness clinging to him, I remain hopeful that one day director Antoine Fuqua will get a chance to direct another well-written action picture with guts. Until that day, I sincerely hope Fuqua can find material to direct better than 2003’s Tears of the Sun, 2004’s King Arthur, and now Shooter. This Mark Wahlberg vehicle places the actor in the role of Bob Lee Swagger, a U.S. sniper who, with his spotter partner, is abandoned and left for dead in Ethiopia by the American government. He survives, but his spotter dies. Three years later, Swagger is retired and living in the Appalachian Mountains. Now alone except for his dog, Swagger sees the administration as a propagator of lies and corruption.

A top-secret government agency, headed by Colonel Isaac Johnson (Danny Glover, excessively seedy), approaches Swagger for help, considering him one of the best living killers. They want Swagger to plan out a hypothetical presidential coup, so they can use his input to catch someone they believe is actually planning an assassination. When the Colonel and his goons, one of them played by Elias Koteas (I’ll get to him later), show up at Swagger’s doorstep, he’s convinced, albeit apprehensively, by an “honor and duty” speech and the Colonel’s very own Congressional Medal of Honor (which the Colonel happened to be carrying with him). Swagger, patriot that he is, does what the Colonel asks, but pays for it when he’s framed for an assassination attempt. Swagger must escape authorities to fight corrupt politicians and military officials and prove his innocence. With the help of a rookie FBI agent (Michael Peña) and his former spotter’s wife Sarah (Kate Mara), Swagger uses all those counterintelligence and combat skills to bring down the bad guys.

Even if you avoid looking at the plot details, which is more riddled with holes than a city of cheese infested with rats, the action remains cold and militaristic. We can’t enjoy the film as a thriller because the plot is so impossibly stupid, and we can’t enjoy the action because it’s reduced to Wahlberg in various forms of camouflage plugging his targets without the slightest hitch. I realize the film is called Shooter, but it would be nice to have someone who misses once in a while. Aside from being caught off-guard by the double-cross, Swagger never deters from his objective nor second-guesses his actions, which makes him a little robotic.

And then there’s a disturbing and out-of-place subplot where Elias Koteas’ ridiculously-named character, Jack Payne, kidnaps Sarah as a ransom for Swagger to turn himself in. A brief scene shows us Payne holding the near-topless Sarah (she just happens to be walking around her house in a bra when kidnapped) from behind whispering like a creep into her ear. A later scene shows us Payne drinking and dancing in front of her, sniffing at her. All in all, Payne takes up about five minutes of inexplicable screentime. In the end, as expected, Payne gets his comeuppance when Sarah shoots him. She acts like she was traumatized, but we’re never really told what was going on there. Did he rape her? Or did Koteas just frighten her with tales from the sets of Look Who’s Talking 2 and Teenage Mutant Ninja Turtles? Payne feels like a character whose scenes were either cut way down in post-production or shouldn’t have been there in the first place. I couldn’t help but wonder why Koteas, the actor from Crash (1996), The Thin Red Line, and Zodiac, would take such a meaningless role.

My only surprise from Shooter came afterward, when I wondered how this movie, due to the film’s anti-government and take-law-into-your-own-hands demeanor, was ever made. The brains behind the assassination is a U.S. Senator, played by Ned Beatty. Swagger, the hero who claims our administration is corrupt, is vindicated when he discovers the senator is behind the conspiracy. The script holds no regard for our current government and, in the end, debatably and dangerously suggests that all senators deserve to be shot just because they’re American senators, and thus, they are all corrupt. Even though the film appeals to commercial movie-going audiences, it’s shocking that, with our administration, this blatantly violent, anti-government film ever got made. It’s also a good thing—it proves our government doesn’t have complete control over Hollywood. Anyway, Shooter lulls during the middle forty-five minutes and feels about a half an hour overlong. An endless array of unnecessary characters and garnish subplots emerge, which on the surface makes the script appear more complicated. On top of that, you get poor dialogue, stereotypical characters, and a potentially irresponsible message decorated in the form of an action movie. All of this is just too much to tolerate.