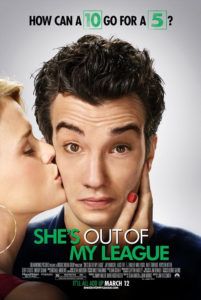 She’s Out of My League falls on the ridiculous idea that we all assign numbers to each other on the basis of appearances. For example, Molly is a 10 because she’s blonde, blue-eyed, slender, has large breasts, and comes from money. Kirk, on the other hand, is a 5 because he’s poor, out of shape, kind of a nerd, and gawky. By this system of numbering, Molly and Kirk shouldn’t be compatible. But do people follow this? The phrase “she’s a 10” is common in slang, but is there an actual numbering system with established rules beyond a bunch of guys bantering about women? Perhaps. Or perhaps this romantic comedy just needed a gimmick to tell its tired story.

Frequent supporting actor Jay Baruchel, who you may have noticed on the periphery in Knocked Up or Tropic Thunder, has his first major leading role as Kirk. Kirk works security at the Pittsburgh airport. His coworkers ogle and harass attractive women that come through their area, and because Kirk stands up for one, Molly (Alice Eve), she eventually asks him on a date. Kirk can’t believe it, because Molly seems so perfect. Why would someone like her want to be with someone like him? Anyway, much to the surprise of Kirk’s family and friends, they wind up together and of course his lack of confidence in himself becomes the central conflict he must overcome before their relationship will work.

Baruchel makes a reasonable leading man. If ever he was going to have a headlining role, this was going to be it. (Here’s hoping he moves on to better material.) He simply looks the part with his awkward posture, eyes squinted like Gilbert Gottfried, and whiny voice. It’s unbelievable that his sniveling mannerisms could attract a “bombshell” like Eve, and not merely because she’s considered a looker and he isn’t. There’s nothing in the script by Sean Anders and John Morris, writers of Sex Drive and Hot Tub Time Machine, that suggests Kirk is more enticing than his nerdy characteristics, save for his charmingly honest disposition. Is candor enough? Perhaps for a low-grade romantic comedy. If not, we’re all in trouble, because if audiences that can identify with Kirk take his cue, they’ll tell girls about their premature ejaculation and believe it’s earning them points.

A movie like this depends on its capacity for cleverness to get by. We’ve seen this sort of story before, always with a nerdy guy trying to woo a drop-dead gorgeous girl. There seems to be one of these archetypal male fantasies for every generation. Mine was Can’t Buy Me Love with Patrick Dempsey as a high school nerd who, with his savings from mowing lawns, buys the most popular girl in school for a month. But rather than set itself apart from those that came before it, She’s Out of My League has a redundant amount of typical genre humor. There are plenty of gross-out gags and some quirkiness courtesy of the wacky supporting cast. But there’s nothing to distinguish the movie from what you’ve seen before, nor anything to make it an instant hit with those unfamiliar with such territory.

Straight from the Judd Apatow wannabe club, this sorta raunchy, sorta romantic venture is pleasant enough, save for the detestable “she’s a 10/he’s a 5” rating system. The characters aren’t particularly likable, but they’re not really dislikable either, which leaves one indifferent. It’s all rather familiar and ho-hum. In my own occasionally detestable star-rating system, that leaves the movie right in the middle with two stars. But then, you have to consider how annoying it is that this very formulaic rom-com did almost nothing innovative with the material and failed to distract us from its clichés. So let’s deduct half a star and leave it with one-and-a-half. In reflection, that’s quite disappointing, isn’t it? Something like this could’ve at least been a three.