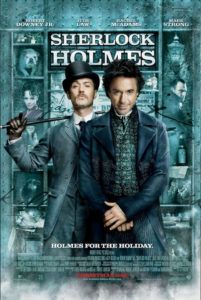 Guy Ritchie’s revisionist take on Sherlock Holmes isn’t about involving the audience in a plot, or following the eponymous hero as he solves a mystery. Rather, the film (re)introduces you to a roguish version of Sir Arthur Conan Doyle’s classic detective character, as played by Robert Downey Jr., along with his sidekick Dr. Watson, as played by Jude Law. This film is about watching these two actors spar words in a hilarious interplay of squabbling amity. Forget that well-mannered gentility Holmes was known for in the stories and previous filmic adaptations. Ritchie, making his entry in what will no doubt become a tentpole franchise, has slapped the viewer across the face to get their attention, and in the process changed the character for a less attentive audience.

That’s not necessarily a bad thing. Concentrating on dynamic character over plot, which Ritchie specializes in, seems to be the reverse of how Doyle originally envisioned the character in the late 1800s. But Ritchie has brought Downey’s incorrigible personality and the actor’s superior British accent, honed, no doubt, on the set of Chaplin. Along with Law, who plays the straight man against Downey’s rough-around-the-edges interpretation, the result breezes by in a whirl of sharp teasing and wily antics. There could’ve been no mystery at all, just a continued back-and-forth banter between Downey and Law, and the film would’ve still been a pleasure. But the film begins with our two heroes soon separating professionally, as Watson is getting married to Mary (Kelly Reilly) and Holmes is vying to keep his partner. The detective-for-hire, along with his trusty right-hand-man Watson, have more going on between themselves than the plot has trickery.

The story involves secret societies, hidden clues, and sacrificial deaths—in all truth, it better resembles a Dan Brown text than your standard Doyle fare. But it’s a world where Downey’s Holmes comes to life, his skills of deductive reasoning and observation used in a scatterbrained way, like a mad genius tortured by his gifts. Those talents are tested by black magic wunderkind Lord Blackwood (the wonderful Mark Strong), who was supposed to have been dead by hanging, but has returned from the grave to murder again and eventually have a go at overtaking Parliament. On the way, Holmes butts heads with his long-lost-love, Irene Adler (Rachel McAdams), the only woman to ever outsmart him, as well as Scotland Yard’s inept but good-humored Inspector Lestrade (Eddie Marsan)—both reoccurring characters from Doyle’s texts. 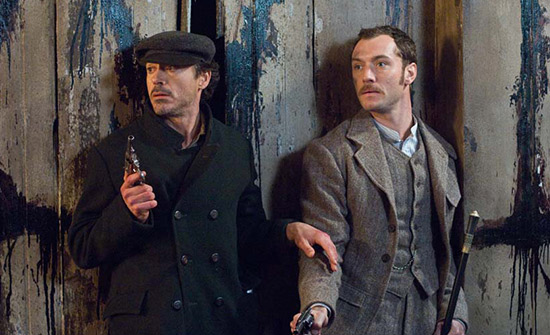 The plot takes Holmes and Watson to cultish locations, seedy back alley confrontations, and elaborate shipyard sets, all augmented by the computerized special effects that help complete the visual experience that is soaking up the period. The London setting isn’t the foggy, Victorian, noir-laden arena of murder that Doyle wrote about; rather, the city is a muddy, crusty place stricken by overcast skies and muted color tones. Everyone looks filthy, particularly the mastermind Holmes who is too busy to concern himself with hygiene, but the stars have good teeth. Ritchie shoots it all through his kinetic, flashy camerawork that stamps his signature on the whole picture.

Consider Ritchie’s film akin to a superhero movie, and like most superhero franchises, the first film doesn’t necessarily break out the hero’s most popular villain. Instead, there’s a second or third-rate foe, if only to provide the required antagonist. The remainder of the film builds the hero character(s) for sequels, wherein the principal nemesis appears. This approach has been used on Batman Begins, Iron Man, Spider-Man, and several others. It’s also used here, where Doyle’s stuffy British detective becomes a sharp-tongued scamp, a fighter, and in many ways the Victorian equivalent of today’s superheroes. Accordingly, the scenario with Lord Blackwood remains intriguing, but not as much as it would’ve been to see Holmes’ ultimate nemesis Professor Moriarty (who appears onscreen, his face concealed, in the standard sequel-setup manner—rumor has it Brad Pitt will play him in the inevitable follow-up).

Many audiences will have a problem with the way Ritchie has adapted the beloved character, particularly those devoted to the original books and short stories. Mystery-deciphering and bravado fight scenes are snappily edited in the same way you’ll see in Ritchie’s Lock, Stock, and Two Smoking Barrels and Snatch. And while Conan Doyle’s version was indeed more eggheadish and proper, he still calculated fisticuffs like a tactician and used his impeccable wits to outsmart his foes. Indubitably. So if you want a strict and accurate adaptation, go to Basil Rathbone or Jeremy Brett, but don’t go to Ritchie. Because if there’s one thing you can count on with this director, it’s that he’ll make a film his own.

And while Sherlock Holmes won’t redefine the way movies are made, it will change your perspective on a classic character and probably open up the detective’s appeal to a whole new audience. Those who couldn’t stomach Holmes proper disposition before will probably latch-on to Downey’s lively portrayal, part genius, part swashbuckling scalawag. Undoubtedly, this first film spends more time developing the characters of Holmes and Watson than involving the audience in a mystery, but the plot is serviceable, whereas the characters are simply delightful. And by the end, after numerous hints toward Moriarty’s impending appearance, you’ll be clamoring for a sequel. Most importantly, the final product is a lot of fun, which isn’t what you’d expect from a Sherlock Holmes story, but it works anyway.