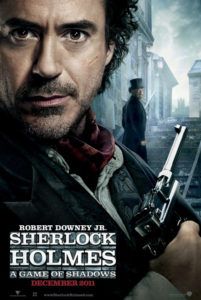 The game is indeed afoot in Guy Ritchie’s Sherlock Holmes: A Game of Shadows, the sequel to his original box-office hit. By all accounts, this superior product one-ups the 2009 movie by focusing more on plot and less on Ritchie’s directorial flourishes, although there are plenty of those too. More deconstructed slow-motion fights and plenty of blockbuster-sized action sequences put a vast distance between Sir Arthur Conan Doyle’s original stories and Ritchie’s kinetic take, but the overall charm and unrelenting degree of fun to be had with Ritchie’s film surmounts any qualms one might have about faithfulness. By and large, this is due to Robert Downey Jr. and his sharp-witted, quick-quipping version of Sherlock Holmes, who may smoke a pipe but certainly wouldn’t utter “Indubitably, my dear Watson.”

Detractors who claimed Ritchie’s first Holmes adventure lacked a sizable conflict (a wholly unwarranted claim, given Mark Strong’s ominous appearance as Blackthorn), will undoubtedly rejoice over his decision to pit the titular hero against his archnemesis, Professor James Moriarty, played with equal parts charisma and menace by character actor Jared Harris. Though Harris may not have the star-power chops of say, Brad Pitt, who was originally rumored for Moriarty, his presence provides an equal-opposite to Downey Jr.’s wiry, intellectually adept, physically dangerous specimen. Moriarty appeared in only one of Doyle’s Holmes stories, 1893’s The Final Problem, but subsequently writers—some authorized to expand on the Holmes mythos, some not—have used Moriarty again and again, and now the two characters feel as intertwined as Batman and The Joker. If that’s the case, you might consider A Game of Shadows an equivalent to The Dark Knight—being a sequel superior to its predecessor because it finally gives audiences that iconic head-to-head these characters are best known for.

The story, not written by Ritchie (as the first was) but by husband-and-wife team Kieran and Michele Mulroney, opens with Holmes already on to Moriarty’s scheming, but unsure of how isolated incidents (assassinations, bombings, etc.) inform the bigger picture. He’s also on to Irene Adler (Rachel McAdams)—that beautiful, duplicitous schemer who has Holmes’ heart—as she’s been employed by Moriarty as a courier. Holmes’ investigations, at first, are of no concern to his faithful sidekick Watson (Jude Law), who plans to wed his beloved Mary (Kelly Reilly), but he becomes concerned when Moriarty’s forces attempt to kill the newlyweds. During a stag party, we meet Holmes’ elder brother, Mycroft (Stephen Fry), a largely comic relief figure with political ties who brings cheerfulness with the slightest nuances (some not so slight, but instead quite naked). Holmes’ investigation leads him to the gypsy Simza (Noomi Rapace, from Sweden’s The Girl with the Dragon Tattoo), who knows details about Moriarty’s extremist plot.

What works best about this sequel is the danger felt in the presence of Moriarty, due in part to Holmes’ admiration and fear of the character. Just as Holmes does, Moriarty foresees actions before they occur and determines the best way to perform; this applies to both fisticuffs and grander machinations. Each twist and turn within the plot amounts to Holmes tracking clues left by Moriarty’s scheme, only to find he’s been one-upped by a considerable foe, his approach predicted by the enemy. As this goes on, the viewer is whirlwinded on a trek across Europe along with Holmes, Watson, and Simza from Victorian London to Paris and finally to Switzerland. Moriarty’s threat is established in a few taut exchanges with Holmes, the dialogue slyly alarming yet measured by British civility, while Holmes’ sidekicks are left to contend with gunfire and goons. Ultimately disappointing are Moriaty’s reasons, which amount to little more than a paycheck by creating demand for his arsenal supply.

You’ve probably seen Harris in movies before (such as The Curious Case of Benjamin Button or maybe The Ward) but never in a role this commercially substantial. Still, he holds his own against his more popular costars, and will no doubt earn himself a name in the process (he’s set to appear in Steven Spielberg’s next, the biopic Lincoln). Also in evidence is Rapace’s skill, and her capacity to handle herself in a Hollywood production. Despite her first language being Swedish, she somehow manages to pull off a complicated accent here, playing a French gypsy with British inflections—now that’s talent. Of course, it’s Downey Jr. and Law’s show, reprising their delightful, playful onscreen relationship in characters who remain inseparably (and in Watson’s case, reluctantly) close, making the film a sort of costumed bromance. Together they’re always a pleasure to watch, and in the end, even a little endearing.

Ritchie delivers grand effects, explosions, machinegun shootouts, and elementary deductions throughout the film’s breakneck plot, using his unique visual style to slow down and disassemble key moments to suspenseful and sometimes comic effect. A Game of Shadows isn’t all that superior to Ritchie’s first Holmes outing, however, just different in terms of story. Sherlock Holmes was funnier and perhaps more fun with the addition of Adler’s sustained love interest; but she departs the sequel early on, leaving a hole in Holmes that perhaps should have been filled with Simza, to whom he shows little interest romantically. Nevertheless, the second film makes better use of a villain, and in turn becomes more involving when familiar characters begin to drop and the stakes are set. When it’s all over, audiences may find the experience superficial and in no way reminiscent of Doyle’s stories, but for just over two hours we’ve been happily diverted.