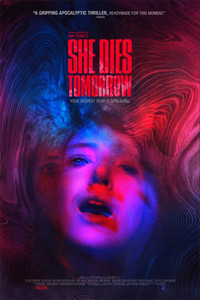 “We all have to die at some point,” says one character in Amy Seimetz’s new film. “Why not tomorrow?” Each day, the world seems to hack away at our resolve a little more. And while death is inevitable, in 2020, it’s almost a sure bet—or at least it feels that way. Somewhere amid the global pandemic locking us inside and the culture war spilling into the streets, not to mention the massive fires in Australia and spanning the West Coast, a freak explosion in Beirut, swarms of locusts in East Africa, and a high-stakes presidential election under two months away, the world has had enough of humanity. And while COVID-19 has prevented audiences from attending theaters to see Seimetz’s She Dies Tomorrow, it’s almost more fitting that everyone remains home, isolated with our thoughts, and catches it on VOD. Her second feature as writer-director blends our apocalyptic preoccupation with a metaphor for the danger of ideas, resulting in a Buñuelian work of surrealism that captures the zeitgeist.

Then again, maybe I’m just projecting. That’s an easy thing to do these days. Every movie villain looks like Donald Trump to me lately, and every film seems to have a subtext reflecting current events. So when Seimetz’s main character, a broken shell played by Kate Lynn Sheil and named Amy no less, wanders around her new house, gets thoroughly soused, and decides to do some online urn shopping, it cannot help but feel like the filmmaker holds up a mirror to the world. Amy’s suicidal behavior, which includes putting Mozart’s Requiem in D Minor on repeat, is established without much explanation aside from vague allusions to a relationship that ended badly. If her 2011 debut Sun Don’t Shine is any evidence, Seimetz isn’t one for explaining things. That film followed a couple on the run after a murder, but the details of the situation remain sparse. The audience has to pick up the story as it unfolds. Indeed, Seimetz is less interested in exposition than capturing immediacy on camera, and the loose premise of She Dies Tomorrow follows her characters from moment to moment.

When her artist friend Jane (Jane Adams) stops by to check in, Amy confesses something strange. “I’m going to die tomorrow,” she says. With nothing but an obscure certainty behind them, Amy’s feelings spread like, well, a contagion. Jane soon comes to the same conclusion, and she shares it with her even-tempered brother Jason (Chris Messina) at the low-key birthday party for his impatient wife, Susan (Katie Aselton). It doesn’t take long for their guests, Brian and Tilly (Tunde Adebimpe and Jennifer Kim), a couple on the verge of a break-up, to suddenly believe that, not long after morning comes, they and everyone else will die. Seimetz’s interest in these characters is not how they try to solve the problem—they don’t—but rather how they prepare. Brian and Tilly finally decide to break up, but not before pulling the plug on his dying father. Jason and Susan cradle their teenage daughter. Amy, meanwhile, downs a few more bottles of wine and takes a dune buggy ride, prompting a trip into her memories. 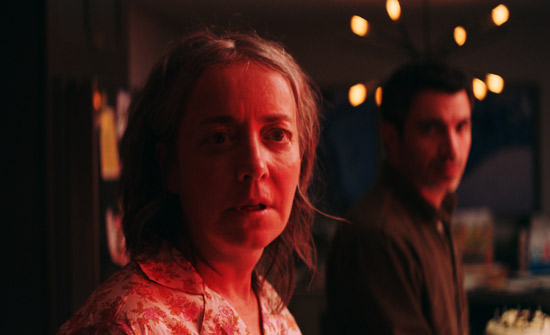 Dour as the subject matter may be, Seimetz infuses humor into the material. When Amy first tries to convince Jane of her imminent death, there’s a back-and-forth with every “No you’re not” from Jane answered with a “Yes I am” from Amy. And Susan’s extended conversation about the sexual appetites of dolphins proves hilarious as well. But what should we make of the flashing lights people see before they are convinced of their approaching demise? At first, they’re blue and red like police lights, but those colors are later joined by purple and green. Jane’s artwork, extreme close-ups of living organisms blown-up into micro-observational abstract expressionism, offers another blend of hallucinatory imagery. These sights, rendered by Jay Keitel’s evocative cinematography, place the film in a Lynchian dream state. And if we glean anything from Amy’s memories, it’s that the whole experience might be an extended hallucination from psychedelic mushrooms.

If there’s a comparison to be made to She Dies Tomorrow, it’s Pontypool (2008), a fascinating Canadian horror film where a zombie plague spreads through the English language. In both films, we watch as words and ideas implant themselves in the characters’ minds. The infection spreads from one person to the next, removing their sense of self and replacing it with something altogether unhinged. Certainly, we’ve all seen the way a dangerous idea can implant itself in the minds of those susceptible. And isn’t it funny, or maybe horrific, how quickly people will act on a new and unverified idea? Still, Seimetz avoids anything so high-concept or literal as zombies. She offers no reason behind these events, nor does she resort to a third act mission where this circle of friends comes together, à la Stephen King fiction, to stop the evil source of their self-destructive thoughts. Her film is more about assessing, or perhaps revealing, the fragile state of mortality. Sometimes that’s a crippling realization; other times, it’s liberating.

After all, Seimetz’s film, supposedly financed with her paycheck from her role in last year’s abortive adaptation of Pet Sematary, finds a certain comfort in knowing what happens next. Assurance that death comes tomorrow may be some form of sweet relief—something definite in an unpredictable world. The viewer might also read into her apparent remarks on how dangerous ideas affect an entire culture, but that might just be me projecting again. She Dies Tomorrow is a cipher, requiring the audience to fill it up with meaning. At the moment, it seems like Seimetz has wrapped up her angst and dissolution into a grim, conclusive expression. I only wish it didn’t feel so resonant.