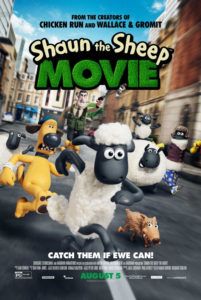 First appearing in Aardman Animation’s beloved 1995 Wallace and Gromit short film A Close Shave, Shaun of the Sheep earned his own television show more than a decade later. Noted for its lack of dialogue and hilarious sight gags, the stop-motion animation series almost achieved the popularity of creator Nick Park’s earlier characters, the cheese-obsessed Wallace and his eye-rolling dog Gromit. After four seasons of farm-bound adventures, the rambunctious bovine Shaun finally gets off the farm in what will likely not be his sole big-screen appearance, Shaun the Sheep Movie. Delightfully free of the stifling commercial sensibilities embraced by today’s most popular animated features, the film may not venture into unexplored narrative territory, but its pleasures are clever, sweet, and often hilarious.

Set on a farm presided over by a Farmer and his trusty dog Bitzer, the film begins with a clever montage showing Shaun and his fellow herd trapped in a boring routine. (Who can’t relate to that?) The squinty-eyed, bespectacled ginger Farmer gets up every morning, brushes his teeth, sprays deodorant on over his shirt, and heads out to the barn. Bitzer wakes up at the same time, hits his head on his doghouse, and follows the Farmer. The sheep wake up, the barn door swings open, and they’re led out to pasture. They graze. Occasionally the Farmer sheers their wool. But nothing much else happens. Over and over this goes on, until Shaun devises a plan to get the Sheep out for a day of adventure—like Ferris Bueller’s Day Off, except they’re seeking an escape from the English countryside, not the suburbs (and they’re sheep, not teenagers). This isn’t the first time Aardman has explored farm animals after liberation. Park’s 2000 feature Chicken Run was a charming ode to The Great Escape, except, you know, with poultry.

If there’s a key difference, it’s that the animals in Chicken Run were doomed to become nuggets, while the sheep here love their fatherly Farmer. During Shaun’s plan, the Farmer accidentally rolls away inside a dank mobile home and finds himself in the Big City with amnesia. Shaun and Bitzer head after him on a rescue mission, and the other sheep follow on their own. Once there, a crazed animal catcher named Trumper, who fancies himself a hero for catching strays and practices in the mirror Taxi Driver-style, hunts them all. The Farmer, remembering nothing of his days on the farm, eventually walks out of his hospital room to become an unlikely hairstylist—although he handles patrons like sheep, buzzing their hair into a bob that would make Shaun proud. At the same time, Shaun and company attempt to escape Trumper’s shelter, an imposing compound occupied by, among others, a crazy-eyed dog and a Hannibal Lecter feline.

If you’ve never seen an episode of Shaun the Sheep, you’re in for a treat. Animal and human characters alike speak in a kind of gibberish. Not the muffled trombone of adults in the “Peanuts” cartoons, but certainly not intelligible. (The Farmer, for example, is clearly a crotchety old Scotsman.) The plot of every episode, and indeed the film, involves Shaun getting into some impossibly chaotic series of events and, somehow, miraculously, returning everything to normal by the end. Visual gags and puns are carefully tailored for observant viewers, such as a sign reading “Convenient Quarry” near the film’s steep climax or a cow sent flying over the “Moon Cafe”. There are a couple of sly references embedded for adults, including nods to Charles Laughton’s The Night of the Hunter and Martin Scorsese’s Cape Fear. And while smaller children may not catch every knowing joke, they’ll appreciate the cuteness of the animals, as well as the occasional fart and butt-related humor (which is somehow less offensive in this format).

Whereas individual episodes of Shaun’s show run around 7 minutes each, writer-directors Mark Burton and Richard Starzak extend the proceedings just under 90 minutes, and never once does the audience feel taxed by pointless scenes. It’s a vast improvement over the studio’s 2012 letdown Pirates! Band of Misfits, even if not all is perfect. Two montages set to modern pop songs feel annoyingly out of place. Still, Shaun of the Sheep Movie remains deceptively simple, yet truly sophisticated in its brand of humor—a brand worthy of silent comedians like Charles Chaplin and Buster Keaton. Because there is no dialogue to tell you what’s happening, the humor requires active viewers to observe the wonderfully detailed environments and nuances, and then find the jokes therein. Give Shaun the Sheep your full attention and the rewards are many.