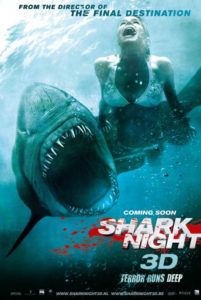 For thirty-five years, shark movies have invariably referenced or reached to attain the mastery of Spielberg’s Jaws, even its own lackluster sequels. Titles ranging from Deep Blue Sea to Mega Shark vs. Giant Octopus have tried everything from smart sharks to prehistoric ones, from amping-up the sex to infusing a minimalist approach. But no matter what disguise they wear, the end result can’t avoid comparisons to Jaws. It’s the shark movie, and there will never be another like it. With uninspired B-movie frills, Shark Night 3D feels more like a castrated, shark-laden version of Alexandre Aja’s remake of Piranha, which was based on Joe Dante’s original Piranha, which in turn was a rip-off of Jaws. Dante’s entertaining version aside, this vicious circle of “inspiration” ends with viewers wanting to just watch Jaws again.

Shark Night 3D opens with an underwater shark POV shot following a young female swimmer out into the water. She’s eaten, of course, but the next scene doesn’t feature Sheriff Brody on the beach to investigate. Instead, we tag along with a group of anonymous college students out to the backwoods bayou home of Sara (Sara Paxton). Sara hasn’t been home in three years because of her sordid past with local hillbilly, Dennis (Chris Carmack), who along with fellow hick, Red (Joshua Leonard), gives the city folk a long, awkward stare. (These two reemphasize every stereotype dispelled in Tucker & Dale vs. Evil.) Turns out Dennis and Red stocked their saltwater lake with a variety of shark species, each equipped with waterproof cameras to record the ensuing terror as boats capsize and swimmers become shark lunch. Everyone dies until the finale when Sara, her wannabe boyfriend Nick (Dustin Milligan), and Sara’s cute yellow Labrador Retriever face off against the questionably motivated hillbillies in shark-infested waters.

Perhaps that last part should have read “spoiler alert” before it, but there’s really no point in concealing secrets for a theatrical release that should’ve debuted as a SyFy Original. Director David R. Ellis goes for another campy hit but finds himself held back not only by a preposterous PG-13 rating, but by a humorless, melodramatic script by Will Hayes and Jesse Studenberg. Any audience seeing a movie from the helmer of Snakes on a Plane and writers whose credits include Adult Swim’s Assy McGee aren’t interested in a movie called Shark Night 3D that’s light on violence and sex. And yet, Rogue Pictures opted to play it safe and distribute a dead teenager shark movie that shirks from gore and contains not one memorable death scene. Even Jaws, which was rated PG, contained more violent content. But Ellis and company have chosen to release a modern exploitation horror movie sans exploitation.

Nevermind that most sharks wouldn’t attack a human swimmer, much less a boat, and the movie never explains why these sharks have determined only to feed on human flesh. Is it something the hillbillies did? Were they genetically altered or trained to hunt people? Who knows and who cares. You can’t see what’s happening anyway. Watching through dim 3D glasses as lousy CGI sharks attack in murky lake water, only to have the camera pull away, is not conducive to this movie’s target audience who want the R-rated standards for violence and sex—the sort of nonsense that went over-the-top in Aja’s Piranha. At least that movie knew enough to push R-rated limits and give the audience what they wanted. Of course, Aja’s movie went too far by pushing its sex element, I believe, whereas Ellis’ movie doesn’t go far enough. Is it too much to ask for an even-grounded thriller about partying college kids being attacked by underwater monsters?

Without even registering in the guilty pleasure realm, the movie’s attempts to humanize its collegebound victims borders on tragic, for the audience that is, as we’re the ones forced to endure sappy scenes of “character development” for one-note roles filled by reject actors. Ellis’ clumsily shot technical credits also embarrass, making one wonder where the production’s budget was spent. It certainly wasn’t used to render believable shark effects or effective use of the nominally used 3D device. Sure, there’s a hilariously silly scene involving a newly one-armed victim hunting a hammerhead shark with a spear, but that’s not enough to endure 90-minutes of tedium. Shark Night 3D is trash, but without even the benefit of being good trash. The only good thing I can say about it is that, fortunately, the dog lives in the end.