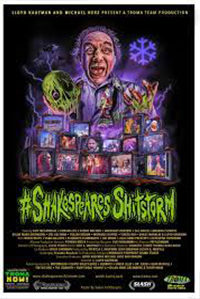 Cult movies should remain at odds with standards of good taste. But most movies once considered cultish have been overcome by popular culture in the last thirty years. Horror and (former) cult movies now have mainstream appeal. Visit your local Target superstore, and you’ll find a collector’s section with shelves of horror-themed action figures, plushes, and bobbleheads based on franchises once thought transgressive: the Evil Dead movies, The Rocky Horror Picture Show, Child’s Play, Friday the 13th, and many others—even Mandy. What was once strange, misbehaved, and alternative has since been normalized, removing much of its cult power. Some of this results from our increasingly fragmented culture that no longer allows for a mainstream to rebel against. Everyone lives and consumes media in their own bubbles, and the dominant culture consists not of a whole but a myriad of subcultures that occasionally overlap, leaving the entire notion of a rebellious cinema neutralized given the diminished target of the rebellion. Moreover, cult and horror consumption has been popularized too, making it less a subculture of deviance and more about creating another marketable bubble.

Even the term “cult” has been appropriated by promotional gurus to sell franchise movies, so every new horror film risks being mislabeled as an “instant cult classic.” Yet, that label ignores how cult films should not achieve instant success—they should be a response to normality, thus a counterpoint in a cultural conversation. A true cult movie earns a market from weirdo fans who whisper its oddities in dark corners and pass copies between friends. The popularity of cult films today is partly because so many of us enjoyed exploring the video store and conspiring to watch these forbidden films in spite of our parents’ warnings. That sense of secrecy and rebelliousness loses its charm when everything’s accessible and no one’s around to scold us for our so-called bad taste. Of course, none of this means true cult films no longer exist, nor do I intend to devalue today’s rampant culture of cult appreciation, of which I consider myself an active member.

Instead, I point out the dwindling state of cultism to note one exception: Lloyd Kaufman, head of the independent production company Troma Entertainment, who might be one of the last true cult filmmakers around. Since 1974, Troma has operated outside of the mainstream, producing D-grade exploitation movies that alternate between splatterfests and sex comedies, often both at the same time. Best known for The Toxic Avenger (1984) and its sequels, Kaufman’s output from Class of Nuke ‘Em High (1986) to Poultrygeist: Night of the Chicken Dead (2006) has remained refreshingly off-brand and iconoclastic. Here’s a filmmaker who refuses to conform and consistently positions his output against cultural mores, usually with an unhealthy dose of gory effects, naked bodies, mutant make-up, sexual taboos, and political atheism. As the culture war rages, Kaufman schemes to drop gallons of whale feces on both sides while shouting, “We need more dildos!” 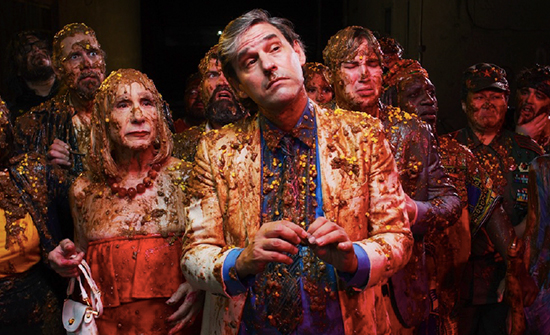 To be sure, just when you think you’ve seen it all, Kaufman delivers #ShakespearesShitstorm, which offers an equal share of gleefully offensive material, regardless of your beliefs. Following the success of his Tromeo and Juliet (1996), Kaufman once again adapts the Bard, using The Tempest as a springboard into an unbelievably disgusting farce that begins as a Big Pharma and opioid takedown and gives way to a sick procession of gags—and gag-inducing imagery. Kaufman plays the resident Prospero, a mad scientist who causes a literal shitstorm. (How, you ask? Killer whale laxatives, obviously.) The event causes a pharmaceutical company’s yacht to capsize, leaving its passengers on the shore of Tromaville, New Jersey. Although Kaufman’s Prospero has developed countless cures for the world’s diseases, Big Pharma has suppressed his science, and so he has concocted an elaborate revenge scheme on, well, everyone. Indeed, #ShakespearesShitstorm takes aim at conservatives and liberals alike.

Over-the-top even for Kaufman, the movie offers one gross-out sequence after another. The shocking opener features a woman shooting herself in the head during a public protest, and her brains splattering all over a crying toddler. From there, a yacht orgy populated by pharma executives, right-wing militants, crack whores, and Twitter-savvy woke police becomes covered in whale diarrhea delivered Free Willy-style from overhead—but that doesn’t stop the orgy, only accelerates it. Later, after Prospero gives everyone a drug that mutates them into various oozing and malformed things reminiscent of Society (1989), only grosser and with more sex organs, the movie descends into a rave-like party of melting faces, anilingus, and spouting orifices. Elsewhere, Prospero’s blind daughter (Kate McGarrigle) recovers her eyesight after bedding a pharma heir (Erin Miller). It’s all assembled with overstimulated momentum, leaving the viewer delirious, revulsed, and oddly delighted. And if Kaufman’s nasty imagery offends your sensibilities and doesn’t amuse you, he doesn’t care—you’re not his audience, anyway. At one point, a woman with a bucket of fried chicken begins to explain “why none of this is funny,” and then a mutant chicken with a human penis attacks her, humping a hole through the back of her head, shooting sperm and blood everywhere. It’s scenes like this that either make you laugh wildly or offend your uppity sensibilities.

For all its ishy effects, structural chaos, adolescent humor, and defiance of good taste, #ShakespearesShitstorm somehow delivers Kaufman’s commentary on modern social discourse, media culture, politics, and humanity’s increasing dependence on societal division. He lashes out at everyone, especially those who air their grievances on Twitter or are too quick to put people on a pedestal. Eventually, the aforementioned woke police meet their demise, announcing, “No social justice warrior can survive perspective—we’re just too damn trivial.” Kaufman recognizes that different perspectives, especially those you’re not predisposed to agree with, make society more diverse and compelling. But most people avoid discomfort for the sake of themselves. In one of the movie’s cleverest ideas, a new pill called “Safespacia” allows people to exist in cultural bubbles, safely removed from anything that may trigger them or make them feel unsafe. Alternatively, Prospero eliminates bubbles by transforming himself in the end into a disgusting mass of every gender, race, and culture who can “identify as everything.” Even if the amalgamated outcome relies on stereotypes, it’s Kaufman’s way of reducing everyone to their base and grotesque reality as human beings and asking, “Can’t we all just get along?”

Kaufman recognizes how culture has fragmented into individualized bubbles, and so, like a genuine cult filmmaker, he resolves to offend everyone with #ShakespearesShitstorm—a movie with so many targets that it cannot help but feel like an erratic hodgepodge. Still, in a world where cult movies have become a marketable commodity, Kaufman remains on the margins. His latest is such an insane, disgusting, perverted, prodding, angry, and debauched experience that, unless you’re an established fan of Kaufman, I cannot recommend it. However, the fact that I felt loathing and nauseated, and frequently thought to myself “this is so wrong” throughout, proves that Kaufman accomplished what he set out to, and that true cult movies can still be made. Best of all, he does it with a sense of fun that makes the whole thing feel like a comic satire rather than a mean-spirited provocation. So I’m glad it exists, if only because it demonstrates that, at age 76, Kaufman still has the energy and sense of humor to produce something riotous, vile, and lecherous that tests the limitations of even the most desensitized viewer.