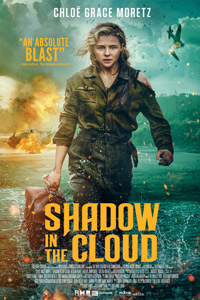 Shadow in the Cloud has a lot of potential. Maybe that’s why writing a negative review brings me no pleasure. I wanted to enjoy this lean genre experiment, which blends World War II action with gremlin horror and feminist heroism, but it’s like an overdose of a good thing. It’s basically The Twilight Zone episode “Nightmare at 20,000 Feet,” starring William Shatner against a furry creature on a commercial flight, except here it’s Chloë Grace Moretz on a secret mission aboard a B-17 from New Zealand bound for Samoa. She sees a monster chewing on bolts and tearing out mechanical parts from the engines, so she sets out to stop it amid ongoing dogfights with Japanese planes. Bugs Bunny, too, already tackled gremlins in the short “Falling Hare” from 1943, which, curiously enough, is the year Shadow in the Cloud takes place. But where Bugs and Shatner found themselves in various states of panic against a creature thought to be a fairy tale, Moretz proves the only clear-headed person aboard a flight of male counterparts who viciously demean and harass her.

In the first scenes, an animated instructional video evokes the aforementioned Looney Tune claims that gremlins are a symptom of mental exhaustion. Director Roseanne Liang, who rewrote the initial screenplay by Max Landis, implants this seed of doubt early in the proceedings to accomplish two things: First, it establishes that the official military position on gremlins is denial, followed by an accusation of mental illness. Second, it helps explain why Moretz’s all-male crew refuses to believe her. A mysterious last-minute addition to the fight, her character Maude Garrett climbs aboard “The Fool’s Errand” with a secret package slung over her shoulder. She finds a group of unwelcoming men who refer to her as “sweetheart” and “pussycat”—and when they think she can’t hear them (and even later when Maude reveals she can hear every word), they engage in X-rated advances and threats that make them all but irredeemable.

From the outset, Liang establishes a postmodern atmosphere, announced by the period-inappropriate soundtrack and synth score by Mahuia Bridgman-Cooper that folds a 1980s sound into the 1940s setting. Somehow, it’s an appropriate throwback to a throwback, harkening to the days when Steven Spielberg produced Twilight Zone: The Movie (1983), which featured a rehash of “Nightmare at 20,000 Feet” starring John Lithgow, or more appropriately Joe Dante’s Gremlins (1984). The ‘80s renewed interest in the gremlins phenomenon—originated as a way for British soldiers in the First World War to explain away malfunctions as diabolical sabotage—and in a way, Liang attempts the same. In another way, Shadow in the Cloud feels modern in its themes of believing women and reconsidering the role of women during wartime. Liang rewrote the script following accusations of sexual misconduct and misogyny against Landis in the wake of the #MeToo movement. She has gone to great lengths to distance her production from Landis, but her treatment of these otherwise welcome themes feels heavy-handed.

For most of the movie, Liang keeps the action centered on Maude, a flight officer forced inside a turret pod for the journey’s duration. She’s isolated from the male crew by a hatch that won’t open and separated from her package. Most of the action takes place on Moretz’s face, and the performer does a terrific job of conveying varying states of terror and incredulity over her problematic male counterparts. Before long, she sees a Japanese plane in the clouds, scouting their location; she also sees an enormous bat-like creature tearing the bomber to shreds. When she tries to alert the male crew, they don’t believe her at first, and they silence her “hysteria” by shutting off the radio—in part because her story about being on a top-secret mission has holes. Trapped and virtually alone, she uses the turrets to shoot down Japanese gunners and concealed pistol to fight off the gremlin, commanding the male crew’s attention and respect.

Shadow in the Cloud is best during the second act, when Moretz alone occupies the screen, dealing with the predicament as her male aircrew dismisses her claims. It’s efficiently shot and suspenseful. However, in the last third of this 83-minute feature, Liang offers silly action sequences that catapult the movie into absurdity. Somewhere between Moretz climbing upside-down along the plane’s underbelly to escape the broken turret and falling out of the plane only to be blown back inside by an exploding enemy fighter, the movie loses credibility and becomes a farce. Certainly, some viewers will get into the gravity-defying spirit of things, most of it rendered with B-grade computer graphics accompanied by Kit Fraser’s sharp cinematography and Tom Eagles’ coherent editing. Alas, the movie takes a turn when it reveals Maude’s true mission defines her less as a highly capable female flight officer who is entrusted with a classified mission, and more as a mother and victim of domestic violence determined to escape her abuser and protect her child.

If Maude were simply a woman defined by her status as a badass, Shadow in the Cloud might have packed a bigger punch. Instead, the screen story falls back on tired and unproductive clichés that define Maude as a protective mother and battered woman. It’s not enough that she’s a skilled flight officer and fights the gremlin in a bout of hand-to-hand combat in the final scenes; it’s that she must rescue her baby from the gremlin. A moment after brutally killing the beast, she breastfeeds her child—in very Madonna and Child imagery—which diminishes the significance of her almost single-handed victory over the enemy planes and horrific monster. While the movie makes Maude’s womanhood essential to her status as a commendable hero, Liang’s unsubtle approach overemphasizes the point. Over the end credits, a series of vintage newsreel footage celebrate women’s roles in the military. But there’s a vast distance between the real women who fought in World War II and the superhuman Maude—a cheer-worthy but cartoonish hero inside an overstuffed movie—and the comparison feels misapplied.