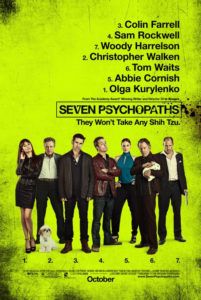 Martin McDonagh’s Seven Psychopaths begins with two quarreling Mafioso hitmen (Michael Pitt and Michael Stuhlbarg) who debate their boss’ orders to shoot their next victim through the eyeballs. McDonagh’s previous (and first) film, In Bruges from 2008, also featured two guns for hire who bicker nonstop, and for a moment, we suspect McDonagh will tread similar territory for his second. But then—Bang! Bang!—they’re dead, shot by a masked assailant. We should have known better than to expect retreaded material from the unpredictable McDonagh, whose screenplay has just taken its first darkly humorous meta twist in a self-aware, comic film packed with such turns, toying with the audience’s expectations as it goes along. Armed with a dream cast of character actors, the playwright-turned-writer-director explores his post-Tarantino machismo and graphic humor with equal parts horror and pitch-black hilarity. But there’s much to it than that; as one character points out: “This thing’s got layers.”

Here McDonagh reteams with his In Bruges star Colin Farrell, who plays Marty, a creatively bankrupt, probably alcoholic Irish screenwriter in Hollywood, struggling to get passed the title of his latest project, called “Seven Psychopaths.” Marty’s concept is a film wherein he tells the individual stories of his titular seven characters, and somehow, they all converge in the finale. Beyond that, he hasn’t written a word. Marty’s friend Billy (Sam Rockwell), who desperately wants to help Marty write his script, suggests basing a character on the Jack of Diamonds Killer, the masked man bumping off mobsters in the Los Angeles area. Meaning well, Billy also takes out a newspaper ad calling for anyone who believes themselves to be a psychopath to get in touch with Billy and Marty. The first to answer is Zachariah (Tom Waits), a well-dressed man carrying a bunny; he tells Marty his frightening life story, tracking his years killing people who kill people. But Marty finds more immediate source material in Billy.

On the side, Billy runs a scam with his oddly dignified rogue friend Hans (Christopher Walken), where they kidnap dogs and, after a few days, return them to their owners for a cash reward. Billy picks up a beloved Shih Tzu belonging to ruthless local gangster Charlie Costello (Woody Harrelson), and in turn, Costello’s men go searching for the dognappers. Marty gets caught in the shuffle, but all the while, Marty and his friends discuss his script and his fragmentary ideas. The film suddenly jumps into a fantastical movie-within-a-movie mode, where Marty explains his tidbit ideas and McDonagh realizes them onscreen. There’s a sequence involving a Viet Cong soldier (Long Nguyen) scheming revenge on American soldiers who massacred his family at My Lai. Billy, too, relays a fable about a reformed murderer haunted by his victim’s father all to way to Hell. At one point in the discussion, Marty throws up his hands and resolves that maybe the first half of his movie should be violent setups, but in the second half, his characters should just drive out to the desert for some realistic dialogue. “Talking!?!” Billy shouts. “What is this, a fucking French movie?” McDonagh’s film turns back on itself when the screenwriter and the two con men decide to high-tail it out of town, to the desert no less, to escape Costello’s bloody wrath.

Somewhere between True Romance, Get Shorty, and Taxi Driver, McDonagh’s material once again dances on the lines between pure rollicking and oddly effectual profundity. Sure, Marty’s name could be self-referential for McDonagh, but this wouldn’t be the Irish writer-director’s first reference to Martin Scorsese either. It shouldn’t be ignored that Billy’s last name is Bickle; indeed, Rockwell delights in a “You talkin’ to me”-esque mirror scene, and his character is obsessed with engineering a final shootout. And McDonagh’s Tarantino-inspired, pop-culture-infused dialogue may never have debuted in his first play in 1996 if not for Pulp Fiction. Nevertheless, McDonagh’s signatures are unique if influenced. In his plays (The Beauty Queen of Leenane, A Behanding in Spokane, and A Skull in Connemara among the best acclaimed), McDonagh’s so-gristly-we-can’t-help-but-laugh-in-horror incidents sometimes outweigh the power of the storytelling, but the sheer luminosity of lively characters in Seven Psychopaths never has a chance to be overshadowed. And like his plays, McDonagh involves his audience in streaks of madness with intermittent moments of emotional clarity.

Defined by McDonagh’s feral dialogue and his obedience to the definitions of a true psychopath, some more subtly explored than others, the characters are realized by a cast that’s nothing short of incredible. This peppering of actors whose presence always adds to whatever project they’re a part of could not have been played by unknowns; rather, their characters require recognizable personalities. Once again, Farrell expresses so much through his aching eyes; the actor excels at playing tortured souls in smaller projects, versus his usually failed Hollywood vehicles (i.e., Total Recall). Walken’s performance may seem like self-parody at first, until McDonagh explores his character’s past, and gradually the role turns into Walken’s most complicated in years. Harrelson could be playing a one-note gangster, except his fanatical devotion to his dog becomes endearing after a while. Waits, Pitt and Stuhlbarg, Kevin Corrigan, and Harry Dean Stanton each lend their roles personality beyond the printed page. But it’s Rockwell who steals the film; having played this sort of bonkers, maniacal, unhinged role before, and often, his unpredictable Billy and his sometimes insane, sometimes oddly insightful behavior sets the tone for the entire film.

Indeed, the resident psychopaths—some living exclusively in Marty’s imagination, others within the reality of the film itself, while others still exist on both levels—are not dull or one-note characters. Billy and others are aware they subsist within a movie, whereas Marty remains oblivious. That Marty continually second-guesses his writing makes for a film where expectations go unmet, the screwball momentum intentionally shifts to something thoughtful, and the writer-director himself acknowledges his downfalls as a storyteller. His roles for women, for example, are underwritten, and none of their stories end favorably: Marty’s girlfriend (Abbie Cornish), Hans’ wife (Linda Bright Clay), Charlie’s cheating lover (Olga Kurylenko), Zachariah’s cohort Maggie (Amanda Mason Warren), and the dogwalker (Gabourey Sidibe), each depicted without much sympathy, are all either dismissed or shot down. McDonagh knows his limitations and stretches them within their broad confines by satirizing them in the open.

Catchy and quirky as its title may be, in the end, Seven Psychopaths is less about a wacky collection of characters a few dimes short of a dollar, and more about a writer at odds with himself. We could have guessed as much, given Marty’s pronounced desire early on to blend his base and artistic drives. As such, McDonagh gives in to his own duality and ends his picture with two shootouts, Billy’s hilarious dream of a badass shootout in a corny graveyard sequence visualized by Rockwell with manic energy, and a moodily wry conclusion at a desert landmark. Carter Burwell’s mournful score reminds us throughout the picture that despite our frequent shocked laughter, the weighty wheels are always spinning in this joyfully grim experience. In the end, McDonagh has convinced us of his characters’ merits and the writer’s own capacity for cerebral cinema, nutty eccentricities and bloody violence notwithstanding.