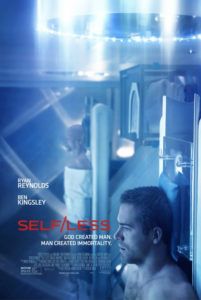 A familiar science-fiction concept gets an uninspired reworking in Self/less, a film owing much to John Frankenheimer’s Seconds, not to mention half-a-dozen other sources. In Frankenheimer’s masterpiece from 1966, an ordinary salesman played by John Randolph pays for a surgically altered youthful face and body. He emerges with a new face, played by Rock Hudson, while the company behind the process stages the death of his former identity and provides him with a new one. The Twilight Zone-esque twist is that his new life, complete with friends and a new lover, is fabricated by the company; everything about it has been inauthentic, and he remains terminally dissatisfied. But rather than a scathing commentary on living life to its fullest while you have it, Self/less takes the fascinating notion of putting an aged mind into a younger body and repurposes the material into a dull actioner filled with shootouts, car chases, and flamethrowers.

Written by brothers Alex and David Pastor, who wrote and directed the post-pandemic yarn Carriers (2009), the film stars Ben Kinsley as New York City real estate mogul Damian Hale. With less than 6 months to live, Damian hands over his fortune to the aptly named Phoenix Biogenic corporation. Run by a steely CEO, Dr. Albright (Matthew Goode), the company carries out a process reserved for the super-rich, called “shedding”, whereby the patient enters a magnetic, MRI-like machine and, somehow or another, has their consciousness transferred into a cloned vessel body. When Damian agrees to the process, he’s no longer able to acknowledge his former life, including his estranged activist daughter, Claire (Michelle Dockery). After faking his death, he sheds his old self and enters his new body’s identity named “Eddie” (played by Ryan Reynolds). Once acclimated, he’s sent to live a promiscuous party lifestyle in New Orleans, enjoying the spoils of youthful vigor in the bedroom and basketball court alongside his new pal, Anton (Derek Luke).

Though Kingsley’s character exists in Reynolds’ body, Reynolds never changes his typical mannerisms to recreate Damian’s behavior. For example, Damian had a thick New Yorker accent, and Eddie does not; Damian had a rigid posture, but Eddie does not. Wouldn’t attributes such as this carry over? But Self/less doesn’t think too much about such things. Eddie enjoys his new life and, once a week, meets with Dr. Albright to secure another week’s worth of pills that hold back curious hallucinations, which Dr. Albright explains away in basic Freudian terms. And although its supposed to be a second act twist, the film’s marketing campaign spoils that when Damian underwent the process, he hasn’t been transferred into the body of a clone; rather, it’s a real man who had a life, wife and child (Natalie Martinez and Jaynee-Lynne Kinchen, respectively). His hallucinations are not hallucinations at all, but memories repressed by pills. When Damian starts investigating the origins of his new body, Dr. Albright’s goons get violent, among them Anton, quite predictably.

It’s not wholly new territory for director Tarsem Singh, a fantastic visualist often stuck with dull scripts. In 2001, Tarsem directed The Cell, a smart and gorgeous thriller where Jennifer Lopez enters the twisted, surreal mind of a serial killer. Aside from scrambled memories and some nice scenery, there’s not much opportunity for visual wonder in Self/less. And while Tarsem rarely delivers something that blends visuals and narrative as well as his brilliant The Fall (2008), the look of his work remains the best aspect of his interesting failures like Immortals (2011) and Mirror, Mirror (2012). Nevertheless, Self/less has none of the visual tenor of Tarsem’s earlier work. Here, he delivers a very workmanlike product that feels as if he’s resigned himself to a director-for-hire gig.

In many ways, the film has much in common with Total Recall (1991), or at least it could have if the Brothers Pastor developed the central identity crisis more. Instead, they offer convenient plot points to justify the film’s shoot-em-up second half. Consider how Damian discovers his body belonged to a former soldier studied in hand-to-hand combat and firearms. Damian himself has no knowledge of such things, but the script explains away that, thanks to muscle memory, Damian can now kick ass. How does muscle memory exist if all memories held by the body’s former consciousness have been suppressed? At any rate, Reynolds handles the fight scenes quite capably, and they’re clearly composed by Tarsem. And just like the head-spinning Total Recall, the action in Self/less becomes over-the-top (but not in a good way), as if an impossible mind-transferring technology wasn’t already outlandish enough.

With none of the heavy psychological underpinnings of Seconds, nor even the full embrace of its science-fiction possibilities like Total Recall, Self/less feels like a wasted opportunity to explore our desire to live forever. Its brand of mediocrity reminded this critic of John Woo’s underwhelming Philip K. Dick adaptation Paycheck, where a fantastic idea about repressed memories leads to an elaborate cover-up. (Speaking of Woo, the punctuated spelling of Self/less cannot help but bring to mind the spelling of another Woo actioner about identity, Face/Off .) And just like that film’s director, Tarsem loses his audience in actionized nonsense, leaving the story’s best ideas to remain under-developed, if developed at all. By the time Damian, in Reynolds’ body, blasts away the bad guys with a flame thrower in the climactic finale, the audience has been lost in the silliness of this intriguing concept that becomes predictable, substandard, and loud.