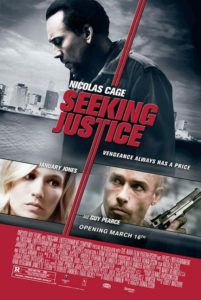 Roger Donaldson’s vigilante thriller Seeking Justice sounded a lot more interesting when it was called The Hungry Rabbit Jumps, back when it finished filming in 2010. In the subsequent two years on the shelves, the title changed to the not-so-terrible Justice, and finally now, in limited release from Anchor Bay, the movie comes with a generic name reminiscent of a ’90s actioner starring Steven Seagal (Above the Law or Out for Justice come to mind). Fortunately, Seagal is nowhere to be found here; although, for many, the presence of Nicolas Cage won’t be any consolation. Cage’s ongoing reign of terror on cinemas continues, unleashing yet another low-rent, direct-to-DVD quality movie that’s admittedly better than his appearances in Season of the Witch or Trespass, but not by much.

Cage returns to the setting of his last great performance (in Herzog’s Bad Lieutenant: Port of Call New Orleans), playing Will Gerard, a high-school English teacher who lives in The Big Easy with his musician wife, Laura (January Jones). When Laura is assaulted and raped one night after rehearsals, a mysterious man named Simon (Guy Pearce) approaches Will in the hospital waiting room. Simon represents a group of concerned citizens who don’t like to see such crimes go unpunished; even if the rapist is caught, he’ll be back on the street in 11 months. “That’s half the time they give you for tax evasion,” he says. Simon’s group knows the identity of Laura’s attacker, and he says they’ll “take care of” the individual if Will agrees to do them a few unspecified favors later on. Will struggles with his conscience for a moment, just one, and then agrees. After he buys two vending machine chocolate bars to confirm his involvement (I’d explain this peculiarity further, by why bother?), the rapist is soon dead and Will feels a sense of security.

Obviously, the day comes when Will is asked to complete his favor, and at first, his tasks are minor, until he’s asked to kill someone. Will refuses, and what follows is a series of scenes where Simon’s group of mostly bald vigilantes intimidate Will into doing what they want, frame him for murder, and then try to kill him. One wonders why this group, which is so expert at disabling security systems and perpetuating conspiracy, needs someone like Will. Couldn’t they just kill whomever they want without need of a patsy? What are Simon’s motivations, beyond just being frantically righteous? Wanting safer streets is one thing, but why does Simon want it so badly? We never learn enough about his character to find out. Instead, the screenplay by Robert Tannen follows Will on a mission to get proof of this group’s existence and to clear his name with local media and authorities that have pinned a murder on him.

Donaldson, director-for-hire on any number of bland projects, continues his streak of ordinariness here. Once the promising helmer of The Bounty (1984) and No Way Out (1987), the Aussie director has since associated himself with no end of humdrum material such as Species (1995), Dante’s Peak (1997), The Recruit (2003), and The Bank Job (2008). Donaldson does fine following the action and resists contemporary Shaky-cam norms; the chase scenes are edited clearly and easy to follow, but they have no style—something this production and script are in dire need of. The same can be said of the actors: Jones remains incapable of expressing emotion; Pearce has fun (but not much) with his seedy villain; Jennifer Carpenter (from Dexter) appears as Laura’s best friend in two-or-three brief scenes; Harold Perrineau appears as Will’s principal and fellow chess player.

Cage, who typically enhances every performance with his signature over-the-top antics, doesn’t try much here. The whole movie might’ve been more entertaining had Cage imbued Will with his usual wacked-out eccentricities, but his performance is decidedly low-impact, much like the movie itself. Still, Seeking Justice tells a familiar yarn with a serviceable approach, making it watchable in a sleepy weekend afternoon sort of way (indeed, my Saturday afternoon screening on opening weekend, in which I was alone in the theater, kept me diverted enough). But then, Cage apologists, myself included, may derive more enjoyment from the material than an average moviegoer would.