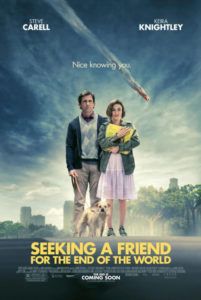 Seeking a Friend for the End of the World begins with the news that humanity’s last hope of survival—an Armageddon-style effort to stop a 70-mile wide asteroid from crashing into Earth—has failed. After hearing this bulletin, the bored wife of an insurance salesman named Dodge (Steve Carell) leaps out of their car without a word and sprints away. Alone, and with three weeks left to figure out his life before the impending catastrophe, the appropriately named Dodge still goes to the office every day and performs his daily routine with joyless resolve. Elsewhere, people riot and have wild orgies and finally say the things they want to say because, after all, who cares? The End is nigh and there are no consequences. But Dodge feels he’s wasted his life and now, with barely any time to fix it, he struggles to figure out what he wants to do with his remaining days.

In the meantime, Dodge still checks his mailbox, watches television, and doesn’t have the heart to fire his cleaning lady, who doesn’t seem to get that she doesn’t have to clean his apartment anymore. This is when the introspective Dodge meets his spritely neighbor, Penny (Keira Knightley), a Brit living in America who missed the last plane home, where her entire family waits. She’s a narcoleptic eccentric; a lover of vinyl records and thrift store clothes, and she’s unchained by the sense of security that Dodge needs so very much. She’s just broken up with her hapless boyfriend (Adam Brody), and now she too has no one. Out of his sheer decency, Dodge sees her crying and takes her in. Thinking about his past and full of regrets, he plans a last-minute trip to visit his high-school sweetheart, the proverbial “one that got away”, to reconnect before all is lost. Penny agrees to drive him, because Dodge knows someone with a plane who may be able to fly her back to England. Accompanied by a dog they’ve named “Sorry” after the note left by its shameful owner, so begins their road trip across a landscape strewn with people handling their impending doom in drastically different ways.

Of course, in almost any movie, if you put two people in a car for long enough, chances are they’ll fall in love. But this happens gradually, naturally. Writer-director Lorene Scafaria deals with her end-of-days scenario by populating it with very real characters and situations that are very often hilarious, but sometimes also moving. Most modern conveniences are gone in the wake of widespread panic, yet somehow Dodge and Penny come across a chain restaurant filled with ridiculously happy employees and patrons who have resolved to go out in a marijuana-infused joy-gasm. Later, they stop by a beach party where Scafaria’s frame observes a small child and elsewhere a pregnant woman. This child will never grow up. That child will never be born. One of the film’s most powerful and enduring ideas is that there’s no way to stop what’s coming. It’s a bleak notion for a movie marketed as a romantic comedy, but its devotion to this concept imbues the film with a certain dramatic credibility that may come as a shock to many viewers.

To be sure, Scafaria has made a film here that’s hard to pin down; although it’s comprised of many recognizable elements, it doesn’t resemble any of them too closely. Inside this clever and heartening little experience are a romantic comedy, a road movie, an apocalyptic drama, and a deeply affecting love story. Hollywood has a mild obsession with apocalyptic movies as of late (see 2012, Another Earth, Melancholia, The Road, etc.), as they’re a breeding ground for examining humanity at its best and worst. When there’s no need to conform to society’s laws and social etiquette, how low will humanity sink, and how quickly? Scafaria explores this notion with shifts in tone that never feel awkward or abrupt, and always return the film to its center as a romantic comedy. Hilarious bit appearances by comedians like Patton Oswald, Rob Corddry, and T.J. Miller are counterbalanced by dramatic scenes with Martin Sheen, Derek Luke, and William Petersen.

Carell and Knightley seem like an odd couple at first, mismatched in age and appearance. But then again, how ludicrously convenient would it be if Dodge found someone his age or Penny found someone just as extroverted with whom to spend their last days together? That they’re two random opposites who met by chance gives a charming quality to the story. Carell has played this sad-sack character before in Little Miss Sunshine and Dan in Real Life, and he’s particularly effective in such roles. They’re much preferred to his broad comedy work in Anchorman or Dinner for Schmucks. But Knightley is playing against type in a film that’s not her usual costume drama (a genre at which she excels; see Atonement, A Dangerous Method, or The Duchess), and she does it splendidly. Her moments of teary-eyed loss are some of the film’s most affecting. Together their romantic chemistry is believable, and in the rather poignant conclusion, downright heartbreaking.

Bittersweet and unexpected, Seeking a Friend for the End of the World somehow manages to be funny, sad, tragic, and romantic. In its depiction of The End, it’s quite brave and oddly beautiful. The film takes hold of you all of a sudden and won’t let go. Before you know it, your eyes begin to tear up and a lump develops in your throat. Scafaria has created a film that people may have a hard time finding—because Focus Features has done a poor job marketing it. Then again, how does one sell a film like this? But once it’s discovered, I hope audiences adore its sense of romance and narrative integrity as much as I did. Scafaria commits herself to the description of the title and in turn, makes observations about how we choose to live our lives and what we consider important. When so many films of this kind dwell on the ugliness people are capable of, this one chooses a smaller story about those things that remain when all else is gone, like family and friendship and love.