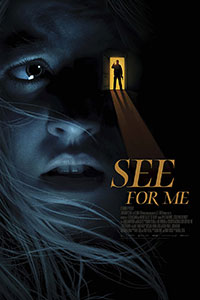 An elaborate heist has taken place. The filmmakers of See for Me have carried out a well-executed caper. They cracked the safe, lifted the plans for other movies in the home invasion genre, and returned them without alerting the authorities. Using the intel they retrieved, they crafted blueprints vaguely resembling the originals. But it wasn’t the perfect crime. The resulting movie, a 93-minute thriller produced in Canada and distributed by IFC Midnight, still shows signs of the robbery. Being about a blind woman who must contend with three criminals, See for Me brings to mind Wait Until Dark, the Audrey Hepburn starrer from 1967. It also recalls David Fincher’s superb nail-biter, Panic Room (2002). Those responsible for See for Me, including director Randall Okita and screenwriters Adam Yorke and Tommy Gushue, haven’t hidden their pilferage very well. But their copy still manages to be superficially convincing.

Although the central conceit resembles other, better movies, a few details make See for Me memorable. For starters, the hero, a former downhill skier named Sophie (Skyler Davenport), supplies an intriguing lead. Rendered sightless after an accident, Sophie has become thorny and independent since the change in her vision, and what’s more, annoyed whenever someone offers help. She has taken to pet sitting for rich people, and while on the job, she lifts expensive bottles of wine and sells them for cash. But at her latest gig—an enormous house isolated in upstate New York—she finds herself confronted at night by three home invaders. Freaked, she relies on a new app called “See for Me,” where a sighted operator named Kelly (Jessica Parker Kennedy) guides Sophie through the house, using Sophie’s smartphone camera to navigate her through the situation. The two form a friendship that resembles John McClane and Sgt. Al Powell in Die Hard (1988)—one person locked inside; the other outside, mostly helpless, but a voice of hope and friendship.

The screenplay follows a predictable narrative trajectory, where the conflict allows Sophie to reclaim her life by overcoming the situation. Kelly, an Iraq vet who spends her time barking orders to her online gaming community—from her perspective, guiding Sophie looks like a first-person shooter—also has some personal hang-ups to work through. Along the way, Sophie, who’s not always the most pleasant person, proves capable of talking her way out of dire situations. The three crooks, who want to break into the home’s hidden safe for reasons that become obvious later on, follow the Panic Room model: there’s a nice one (Joe Pingue), a mean one (George Tchortov), and one in the middle (Pascal Langdale). Sophie survives by confessing that she, too, planned to rob the house, and therefore, they can trust her. And anyway, it’s not as though she can pick out the crooks in a lineup. However, Sophie’s ability to talk her way out of a police encounter proves less successful, and the last act becomes dire. All the while, the audience questions what happened to the reason Sophie was there in the first place—the cat. Indeed, what happened to the cat? Her feline assignment all but disappears, avoiding the usual jump-scares provided by animals in these situations.

In the style of many independent thrillers today, Okita employs a synth score, courtesy of Menalon, which gives the film a brooding quality. Though, one wonders if something more in the vein of Bernard Herrmann might have elevated the tension. The director crafts several long, dialogue-less, suspenseful scenes of Sophie snooping around in the dark or the criminals searching but just missing her. Cinematographers Jordan Oram and Jackson Parrell make good use of their digital camera’s ability to see in the shadows and render pitch-black sequences with visible brown hues (the movie will reveal whether or not you have a well-calibrated TV). But some issues of logic do arise. Note how, when Sophie talks to Kelly, trying to remain quiet and out of sight, her phone’s brightness setting seems to be fixed on high. It’s a miracle the robbers don’t see her running around in the dark, holding her glowing cell phone like a small star in the palm of her hand—the light of which illuminates her face for the audience’s sake, not the practicality of the story.

In this review that so far has used other movies to describe this one, here’s another example: the elements of a young woman home alone, some nifty technology, and home invaders appear similar to Steven Soderbergh’s KIMI, released within two months of See for Me. Soderbergh’s film had more fun with the concept and, like the other material referenced herein, more style. Even so, Okita delivers watchable late-night fare that, yes, looks perhaps too familiar to the movies that inspired it but remains a worthwhile entertainment nonetheless. Davenport, who is legally blind, and Kennedy make for sturdy leads. And the main character’s potential for criminality supplies a couple of twists and turns, although not to the extent that the movie rethinks the original schematics.