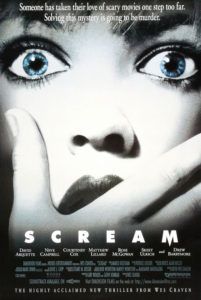 Wes Craven’s Scream opens with an iconic scene greater than the remainder of the movie, even the remainder of the franchise. Drew Barrymore, the most famous star in the cast at the time, plays the big-breasted blonde teen, Casey. She receives a menacing phone call while home alone, popping popcorn and preparing to watch “some scary movie.” On the other end, the gravelly male voice asks her to name her favorite scary movie, to which she replies Halloween. After the voice gets a little too creepy, even threatening, she hangs up. The calls continue, and Casey becomes frightened. Finally, she asks what the voice wants. “To see your insides,” he replies. She’s deathly afraid now. Tears stream down her face, and the phone’s persistent ring causes her to surge with terror. The voice says he wants to play a game, and he proceeds to quiz her on scary movie trivia. When she incorrectly responds to a question about Friday the 13th, it leads to the murder of her boyfriend, Steve—“He’s big and he plays football and he’ll kick the shit out of you!” she promises—just out of her patio window. Casey, too, meets her demise when a masked figure bursts into the house, chases her outside, and disembowels her. And after several sequels and years of repetitive plotting and increasingly elaborate backstory piled onto the Scream franchise, this first sequence still leaves us gasping for air.

The bravura opener demonstrates Craven’s knowledge of slasher movies, while it also confirms screenwriter Kevin Williamson’s desire to simultaneously embrace and expose the subgenre’s formula through satire and in-jokes. The scheme is a rather brilliant one, as Craven and Williamson reinvent the material by using the same formulas that they seek to parody. Craven, of course, helped invent the slasher subgenre with his 1984 hit A Nightmare on Elm Street, then an alternative take on the killer-in-a-mask trope that had dominated the horror market. His maniac, Freddy Krueger, did not invade the homes of his victims but their dreams, using a homemade glove with knives on the fingers. Craven would continue to offer pseudo-slasher alternatives with Shocker (1989) and The People Under the Stairs (1991). Oddly enough, Scream was Craven’s first horror film about a traditional masked killer. Williamson, a would-be actor turned UCLA-trained screenwriter, sold his script to Miramax, and it was his first of many produced at the studio’s genre offshoot, Dimension Films. The late 1990s would bring a handful of Williamson’s brand of knowing horror movies to the screen, including I Know What You Did Last Summer (1997) and The Faculty (1998).

Both Craven and Williamson relish how their characters occupy and defy slasher movie clichés. They quote classics of the horror genre, and they list their “rules” with enthusiasm. Craven and Williamson know that such truisms are sometimes ludicrous but necessary. And yet, though Williamson’s script adheres to the clichés as the body count rises, Craven’s capable direction makes the procession of twists and bloody murders visceral and, well, scream-inducing. The opening sequence gives way to scenes in your typical horror movie high school, complete with twentysomethings playing teens and almost no time spent in class. Here, The Fonz (Henry Winkler) is a principal whose loudspeaker broadcasts include Orwellian announcements (“Remember that your principal loves you”). Such moments border on satire, to be sure. Virginal student Sidney Prescott (a glossy-eyed Neve Campbell, fresh from TV’s Party of Five fame) dwells on the murders of Casey and Steve, as nearly a year ago, her mother was raped and murdered in almost the same manner. Her supportive but sexually rejected boyfriend, Billy (Skeet Ulrich), attempts to calm her. At the same time, a nosy local reporter, Gail Weathers (Courteney Cox), seeks to interview Sidney about her take on the murders and their similarity to her mother’s death. Though Sidney already testified and helped convict her mother’s alleged killer, Cotton Weary (Liev Schreiber), Gail believes Sidney was mistaken—that the latest rash of killings, conducted by someone wearing a “Father Death” costume, proves Weary’s innocence.

On the periphery are Sidney’s friends, played by an obnoxious Rose McGowan and an even more obnoxious Matthew Lillard, who take over-acting to new extremes. McGowan’s character helps dub the killer with the name “Ghost Face,” while Lillard’s over-the-top performance is enough to take a viewer right out of the movie. Then again, there’s something unhinged about his saliva-spewing line deliver and altogether wired screen presence that, upon revisiting the movie, provides an all-too-apparent clue to the third act twist. Luckily, Jamie Kennedy provides some laughs as Randy, the resident video store clerk and movie geek whose vast knowledge of the horror movie survival rules (don’t have sex; don’t drink or do drugs; never say “I’ll be right back”) keeps at least one or two characters alive. He’s involved in a smart sequence while watching Halloween. During the scene where the masked Michael Myers approaches Jamie Lee Curtis from behind, Randy shouts, “Jamie, turn around!” Meanwhile, Ghost Face approaches Randy from behind, leaving the audience shouting for the character to observe his own warning.

In the post-Tarantino, pop-culture reference sense, this is a horror movie about horror movies—specifically those in the slasher subgenre, but also about movie watching and trivia in general. Nods at Universal’s 1931 Frankenstein give way to discussions about Jamie Lee Curtis’ frequent virginal heroine presence in everything from Prom Night to Terror Train. Someone mentions those “Wes Carpenter” films with disdain, as Craven is sometimes confused with John Carpenter since both directors have created iconic screen killers. Another character questions why Hannibal Lecter eats people or why Norman Bates needed to kill at all, while another still wishes her life was more like a Meg Ryan movie. Horror movie icon Linda Blair appears in a brief cameo. And then there are the many Sharon Stone references, which Williamson’s script uses to no end. Indeed, the film was written in the 1990s—there’s no doubt about that. Discussions about “cellular phones” and how one teen suspect can afford this advanced device earns a chuckle every time. Craven pokes fun at himself as well. References to A Nightmare on Elm Street occur throughout. In the opening sequence, the voice on the phone tells Casey how scary the Freddy Krueger movies were. “Well, the first one was, but the rest sucked,” she replies, as if in defense of Craven, who directed only the first film in the initial series. The high school employs a janitor (played by Craven) donning a red and green sweater and dirty brown hat, and Billy is a dead ringer for Johnny Depp, who in the 1984 film played a boyfriend who climbs into his girlfriend’s bedroom window for PG-13 rated romance.

It’s all very familiar, but it’s enlivened through Williamson’s sharp approach and Craven’s skilled direction. Craven’s lens flares, manic chases captured in long takes, and Dutch angles in suspense scenes lend the material a distinct, heightened appearance. The visual style enhances the thrills and occasional shocks, while the use of music and aural jump-scares remains overdone (aside from using a bus to achieve a jump-scare, a callback to the original Cat People). However, once the self-referential slasher movie humor becomes secondary to the plot, and the characters have finished pointing out the tired formulas that Williamson’s script adheres to anyway, Scream progresses on autopilot, resulting in a mystery that becomes predictable. Horror fans can’t help but think of Wes Craven’s New Nightmare, another movie-savvy horror flick by Craven that professed to be something new while offering more of the same. But under the pile of dead teenagers is an innovative movie experience in which the characters are strangely aware that they’re in a horror movie. That the audience gets to watch them point out, try to avoid, but make obvious mistakes anyway suggests something unique and original—a wildly entertaining, and even sophisticated, rarity among slasher movies.