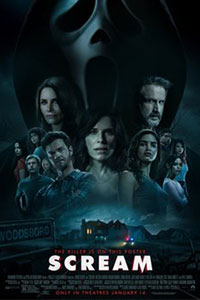 The latest entry in the Scream franchise is another retconned sequel—or, as the movie refers to itself in its pervasive self-awareness, a “requel.” Intended as a reboot for a new generation of horror fans, it follows in the footsteps of 2011’s The Thing or David Gordon Green’s Halloween (2018), adopting the original’s title to push the series in a new direction. And so, Scream, co-directed by Matt Bettinelli-Olpin and Tyler Gillett (Ready or Not, 2019), presents itself as something altogether new, with irony to spare. Technically the fourth sequel, and for a long while marketed as Scream 5 until the promotional department committed to the conceptual wink, the movie features a cast of almost entirely armchair horror experts who identify every cliché as it’s happening. Of course, that was always part of the fun in the earlier movies directed by Wes Craven and (mostly) written by Kevin Williamson—the victims were aware of horror movie rules. Much of the pleasure was watching how characters couldn’t help but inhabit the very clichés they had pointed out, while the survivors usually defied them in clever ways.

Now imagine a Scream movie that openly discusses the conventions of modern horror, adheres to and deviates from them in various ways, yet all the while has a moody tone. Despite the witty screenplay by James Vanderbilt and Guy Busick, the unfortunate reality of the new Scream is this: it’s not very fun. Even as the movie’s playful snark and commitment to the legacy of the earlier entries drive the story, the filmmakers have resolved for a mostly humorless experience. The first four Scream movies each balanced their slasher suspense with notes of comedy and satire. I remember the screenings, how the audience alternated between laughs and audible gasps. A good measurement of almost any movie’s success is the audience’s aural reactions. But aside from a few groans over the visceral violence, the audience at my screening of the new movie was mostly quiet—no guffaws, no chuckles, just silence—and that’s a bad sign.

Then again, the screenwriters have tied themselves in knots to predict and explain the audience’s reaction. Vanderbilt and Busick inject dialogue that foresees how fans will claim they went “off the rails with number five” and characters who remark, “Are you telling me I’m caught in the middle of fan-fucking-fiction?” They have studied online commentary about sequels that stray from their franchise roots—such as Star Wars: The Last Jedi (2017), complete with a joke about how one of the Stab films-within-a-film was directed by Rian Johnson—in anticipation of how fans will respond. They acknowledge how detractors will claim the new Scream is too different from what they grew up with and how its departures betray the originals. Even though the script is smart enough to emphasize its own game and how fans will react, that doesn’t automatically result in a compelling movie. Although each digression and change from the previous movies has been accounted for and overtly discussed by the characters here, the result remains rather dull. 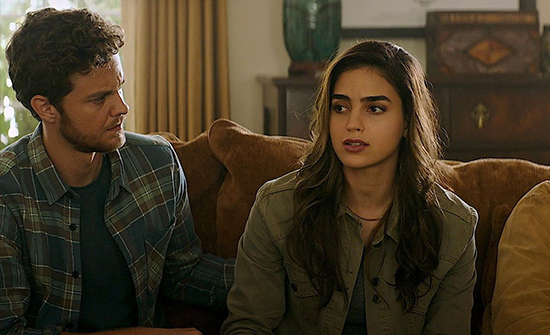 The plot relies heavily on the original while pushing the story forward in true requel fashion. Nick Cave and the Bad Seeds’ “Red Right Hand” plays on the soundtrack, while a new string of murders in Woodsboro signals the return of the Ghostface killer, whose victims have something to do with the murders in 1996. The targeted teens seek the help of Dewey (David Arquette), the former sheriff who has turned into a trailer-park alcoholic, and he gives them the rundown: “Everyone’s a suspect.” The teens also rely on their knowledge of the genre, namely the ongoing Stab movies, which everyone agrees have become tired, repetitive, and worse—the latest entry betrayed the legacy of the original with flame-throwers and a metal mask (think Jason X, 2001). The killer, we learn later, is a toxic fan who wants to return the Stab franchise to its roots by supplying fresh material with a new killing spree. As a result, this Scream subtly associates its killer with anyone who laments the new movie’s alternative approach. Either you’re on board, or you’re part of the problem.

Amid its embrace of slasher and requel formulas, Scream also talks about the emergence of so-called elevated horror. The opening scene features an anonymous caller asking Tara (Jenna Ortega) a familiar question: “What’s your favorite scary movie?” She talks about The Babadook (2011) and its serious symbolism before narrowly surviving a brutal attack by Ghostface (the violence throughout the film is downright gut-wrenching). As the movie unfolds and the body count rises in gristly kills, the filmmakers seem intent on crafting an elevated slasher. The hero, Sam Carpenter (Melissa Barrera), Tara’s older sister, left Woodsboro years earlier after discovering her biological father was Billy Loomis (Skeet Ulrich)—who appears to Sam in psychotic hallucinations. After learning about the attack on Tara, Sam returns to her hometown, along with her boyfriend Richie (Jack Quaid). But the question remains: Does Sam’s DNA mean she has followed in her father’s footsteps? They attempt to unmask the killer, albeit with a streak of self-seriousness that robs the experience of fun.

Scream movies, of course, occupy a whodunit structure that’s in full effect here, right alongside its genre awareness and rampant stumbling over itself for fan approval. The resident horror expert and niece to Jamie Kennedy’s movie-fanatic Randy from the 1996 original, Mindy (Jasmin Savoy Brown), explains the rules to her friends—a likable cast of teens played by twentysomethings (some things never change). Inevitably, the killings prompt the arrival of franchise heroes Sidney Prescott (Neve Campbell) and reporter Gail Weathers (Courtney Cox), who have little to do besides show up with punny lines like, “I’ve seen this movie before.” Even though the events should produce a strong reaction from these legacy characters, the movie treats them so peripherally that they never have time to reconnect with the audience. Campbell, especially, feels underutilized. Sidney doesn’t have a dramatic arc; she spends most of her screen time telling Sam what to expect from the situation. But Sam isn’t all that compelling as a lead, not when this fan would rather see a new layer to Sidney—in the way that Green turned Laurie Strode into a troubled survivalist in his Halloween requel, resulting in a terrific performance from Jamie Lee Curtis. Alas, the filmmakers didn’t have anything so challenging planned for Campbell.

For a particular type of viewer, all of Scream’s meta-ness and many callbacks to the earlier movies will be enough—there’s an undeniable pleasure in recognizing Easter eggs hidden for the committed fan. The directors deliver a confidently made movie, and it’s difficult not to respect the screenplay’s traps for those who would complain about its perceived deviations. However, just because the filmmakers blatantly call out their agenda doesn’t make it successful. If Scream intends to replace the horror-satire stylings of the first four films with something more dramatic, it has failed to evoke a profound emotional response out of this critic to earn its place among the pantheon of elevated horror films. The story feels overly concerned about justifying its existence and thematic import and not concerned enough about capturing the emotional evisceration of most elevated horror. Maybe I’ll be considered an old fuddy-duddy for this, but I want to have fun at a Scream movie—to laugh and jump on a thrill-ride-of-a-movie. I didn’t have that experience, and maybe that’s just what the filmmakers intended, but that doesn’t mean I have to like it.