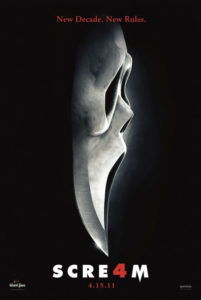 Scream 4 isn’t nearly as smart as it wants to be, which is to say that it’s not as smart as the 1996 original. Within the franchise’s usual cinema-savvy discussions, in-jokes, and characters aware of horror movie clichés, the latest sequel contains themes and debates about the rules behind reboots and remakes. In an attempt to comment on the unfortunate state of horror since Scream was first released, and in the eleven years since Scream 3 plagued theaters, this fourth entry can’t decide if it wants to remake director Wes Craven’s slasher franchise, reboot the material for a new generation, or simply add another tally to the growing list of underwhelming sequels Dimension Films has to offer. Kevin Williamson returns as screenwriter on a film that—despite attempts at being a “Screamake” or “shriekquel”—feels like more of the same old formula but with a larger number in the title.

Veteran survivors (and former youngsters) from the first movie return here among a new generation of victims. The main players are still desexualized damsel Sidney (Neve Campbell), bitchy reporter Gail (a post-plastic surgery Courteney Cox), and hapless police officer Dewey (David Arquette). The new members have minor developments and subplots, but their main purpose onscreen is to increase the film’s body count. A new beginning welcomes the new generation of moviegoers back to Woodsboro, Ohio, home of the notorious “ghostface” murders that spawned Gail’s bestselling book on the subject, as well as seven Stab movies that filled the backgrounds of Scream 2 and 3. Finally over her past trauma, Sidney stops in Woodsboro for her tour to promote a new book called Out of Darkness, with which she proclaims she’s moving forward and putting three sets of gristly murders behind her. Fat chance.

Of course, just then a copycat killing spree breaks out in Woodsboro, forcing Sidney to relive her initial experiences through the eyes of her distant teen cousin Jill (Emma Roberts). Jill’s pack of friends (including teens played by twentysomethings Hayden Panettiere, Rory Culkin, Erik Knudsen, and Nico Tortorella) make up all the same character tropes from the first movie: there are three horror movie-obsessed characters to quote genre logic; one angry ex-boyfriend to make himself a suspect; a whole slew of parents who inexplicably disappear so their children might be slaughtered without effort. The killings are nothing short of repetitive: Ghostface suddenly appears, there’s a chase, and then a struggle followed by an inevitable stabbing. Sidney, Gail, and Dewey get involved insomuch that they watch from a peripheral view as the teens are killed, and then become further entangled in the second and third act. Still, it never feels like their movie, even if they’re the heroes by the end credits.

Some half-attempted comments on how horror movies have changed in the face of new media fall flat, including discussions of torture porn, found footage trends, and the Facebook generation’s propensity to want it all now. The screenplay contains more cell phone conversations than The Departed, and more texting than you’re likely to see amongst moviegoers in your screening. One character live-streams via headset recorder to his website, whereas webcams play a crucial role in the killings. Technology has more screentime than Campbell, whose protagonist role has no notable arc other than her established characterization from previous films (the same could also be said for Arquette and Cox’s characters). But there’s very little any sequel to Scream could do without feeling redundant, because no matter how aware the characters are of horror movie clichés, they’re still going to behave in a way that keeps the audience in familiar territory. Doubtful you’ll ever see a Scream sequel that kills off one of its main trio of stars, and so the audience never really feels a sense of danger.

Much like the lackluster sequels to Scream, witless victims acknowledge horror movie rules with absolute certainty in one scene, but then break those same rules in the very next scene. It’s almost as though Williamson wants the audience to know that he’s run out of original ideals—that he’s found no new ways of telling the same story, and that making this sequel was a business decision more than a creative one. At least in the original, Jamie Kennedy’s cinephile knew to avoid certain deathtraps all-too-common in the horror genre. What’s more, the killers were clever enough to out-wit even the most devoted slasher movie aficionados. Yet here, Williamson has characters engaging in long patches of dialogue about movie rules, but then sends them outside into the dark night to investigate a noise or upstairs to look for a weird shadow. How could they be so stupid, you might ask? Because that’s what you’re used to, and the filmmakers would never want to start challenging you—not with a “Part 4”.

More than its movie-within-a-movie-within-a-movie tricks or self-referential stylings, Scream 4 is just another sequel, plain and simple. For fans of the franchise eagerly awaiting another installment, its Ten Little Indians scenario and Scooby Doo finale will feel familiar enough. Williamson hasn’t changed the rules, rather propelled the oldest axiom in modern Hollywood: sequels to established properties sell. The film’s one or two new ideas fall short of doing anything inventive with the material, largely because Craven and Williamson demonstrate how afraid they are of stepping outside of the franchise’s now-engrained formula. Wholly unnecessary, the result proves watchable in a crowded theater and keeps your attention for the duration, but hasn’t reinvigorated the series the way it should have after a decade away.