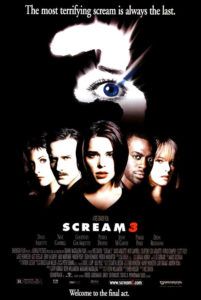 Nothing feels quite right about Scream 3, in that it’s little more than your run-of-the-mill slasher movie, which is the opposite of what an entry in the Scream franchise, defined by its self-awareness, should be. This is the kind of movie that the first Scream would have referenced for its predictability. Wes Craven returns without Kevin Williamson, writer of the first two Scream movies (as well as a handful of other hip teen horror fare, including The Faculty, Teaching Mrs. Tingle, etc.). Instead, scribe Ehren Kruger gives his script all the life of a cardboard cutout. None of the characters have the dimension of the previous movies; the protagonist, Sidney Prescott (Neve Campbell), is barely present; and when the killer is finally revealed, it’s done so without even a smidgen of suspense or surprise. In other words, this third movie in the franchise has all the flaws moviegoers have come to expect with the third go-round in a horror series.

Is that the point? The original Scream and in some ways even the sequel feel masterful next the slasher banality of this third film, which suggests its own profundity by openly acknowledging that it’s the closing chapter in a trilogy. Resident movie geek Randy (Jamie Kennedy) makes an appearance from beyond the grave via videotape to establish the rules when closing out a trilogy, which he says should always brings the story full circle back to the beginning. The killer in Scream 2 attempted to tell us that sequels are always bigger and better than the originals—but as the movie itself proved, just the opposite is true. The same conversation takes place in Scream 3 concerning the closing entry in a trilogy, which says that examples like Return of the Jedi or The Godfather, Part III were underwhelming conclusions to their predecessors, but brought the story to a close. Accordingly, this third entry may think its ending the franchise (it doesn’t), but it does so with a whimper.

The plot concerns the production of “Stab 3”, the third sequel to the movies based on the Woodsboro murders. Beating the movie-within-a-movie idea into its grave, the story’s killer selects his victims based on the order in which the characters in the “Stab 3” script die. And this time around, the killer has a doohickey that can make him sound like anyone. Suspects become those close to the production, including the leading lady (Emily Mortimer), the cast’s resident diva (Parker Posey), a bimbo actress (Jenny McCarthy), the frustrated young director (Scott Foley), and the sleazy horror producer (Lance Henriksen). Patrick Dempsey and his hair play the cop investing the murders.

Meanwhile, for most of the movie, Sidney hides away in her secluded home in the hills, staying out of the public eye. Few know her location, which means she doesn’t have to worry about intruders or creepy calls from Roger Jackson. Instead, she’s haunted by memories of her mother, which put forth the notion that maybe, just maybe, the killer might be connected to her mother’s death. Maybe. Probably. Anyway, the characters speak on cell phones now, which is an upgrade from the previous movies. Most of the plot involves reporter Gail Weathers and the recently self-appointed bodyguard-for-the-stars Dewey (Courteney Cox and David Arquette, who met and fell in love while working on the Scream movies) searching for the killer’s identity. Eventually, Sidney shows up to unmask the killer in a reveal worthy of head-scratching indifference.

The in-jokes and satire don’t have the edge that they do in the earlier movies. Craven makes another cameo as someone taking a studio tour (yawn). Jason Mewes and Kevin Smith appear as their Smith-verse counterparts Jay and Silent Bob, owing to their servitude at Miramax. Schlock legend Roger Corman appears as basically himself, a studio executive backing a B-movie. Carrie Fisher shows up to make a crack at herself about sleeping with George Lucas for the role of Princess Leia. And yet, none of these cameos have anything to say about the state of horror movies circa 2000. There’s no wit behind them, just low-grade humor without a real subject beyond some basic visual gags.

Moreover, one of the bigger problems with Scream 2 that carries over here is the lack of real horror. Aside from stabbings, the sequels grow increasingly tame when compared to Scream, which boasted a disembowelment in the opening scene. It’s become obvious that these films are no longer about horror, rather about punchy dialogue and ho-hum laughs—whereas the original proved so innovative by being both. The charge of any sequel in any genre is expanding the mythology of the original, while also doing more, going further, and breaking new boundaries. The Scream franchise seems to have taken the opposite approach. In a series that prides itself on being savvy about movie formulas, how disappointing that this one can’t see what a cliché it’s become.

Upon reflection, Scream had something to say about movies, how they work, and why we love watching them. It had something to say, and it practiced what it preached. But these sequels feel obligatory—the hungry greed machine at Miramax’s Dimension Films just couldn’t resist turning the crank to produce another hugely profitable blockbuster until it defeated their initial purpose altogether. Watchable solely out of familiarity with the characters and some mild investment in their fates, Scream 3 is inept but endurable. Though almost immediately after viewing, audiences are bound to lose track of the second and third movies in their memory, as they blend together in both structure and dullness. And given their failure to engage, they force lament for the inevitable Scream 4, due April 2011.