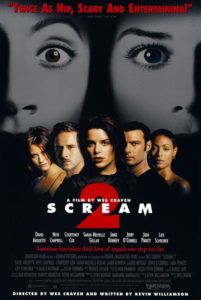 After the ground-breaking mixture of self-parodying laughs and slasher thrills purveyed in Scream, director Wes Craven and screenwriter Kevin Williamson had much to live up to. Could they extend the first movie’s level of rampant genre-aware in-jokes into the inevitable Scream 2, while also maintaining the scares and being anything but a typical sequel? Since the original was so unique for transcending the slasher subgenre with its pop-culture references and discussions of horror movie formulas, Craven and Williamson were seemingly bound to fail. Their second go-round increases the amount of humorous film-related dialogue, but then spends less time trying to scare us, resulting in a predictable whodunit with more false alarms and red herrings than one can count.

Broadening the suggestion that the killers from the first orchestrated their murder plot by deriving their scheme from slasher movie clichés, the sequel does much the same, but takes the movie-within-a-movie concept one step further. The sequel opens at a sneak preview of “Stab”, a movie based on the real-life events from the first movie, complete with a Ghost Face killer chasing teens about with a knife. Onscreen, viewers see Heather Graham in the Drew Barrymore role, and later Luke Wilson and Tori Spelling in the respective Skeet Ulrich and Neve Campbell roles (which is amusing, as Campbell’s character Sidney Prescott remarks in the first that with her luck, someone like Spelling would play her in the movie version of her life). During the most detestably wild screening ever, moviegoers dressed as the killer hoot and holler in the aisles, completely oblivious to the murders happening before them. Jada Pinkett-Smith and Omar Epps make brief cameos as the prologue’s victims.

Two years have passed since the murders in Woodsboro, even though only one year has passed between Scream and this sequel. And with the opening of the “Stab” movie looming over Sidney, who has since moved off to college, the murder of the two moviegoers sparks all sorts of questions. Has a copycat killer decided to pick up where the original killers left off? Meddlesome reporter Gail Weathers (Courteney Cox), whose book on the Woodsboro murders inspired “Stab”, continues her flirtation with witless cop Dewey (David Arquette) as she investigates the recent deaths. Cotton Weary (Liev Schreiber), the man wrongly imprisoned for the rape and murder of Sidney’s mother, looks to extend his fifteen minutes of fame by getting Sidney to agree to a Diane Sawyer interview. And Sidney’s boyfriend (Jerry O’Connell here) is once again asked to keep it in his pants. Just as with the original, everyone’s a suspect.

Jamie Kennedy’s Randy, the human survival guide to horror movies, appears once more and tries desperately to become a leading role by getting the girl. He fails, and according to his own set of rules, he must die. But before he does, he’s given a number of smart scenes involving lengthy debates about the general deficiency of sequels next to their predecessors. His college film class discusses how sequels are hardly ever better than the original, citing examples from the superiority of Alien over Aliens, to The Terminator’s classic appeal over T2. Of course, you can guess the killer (or at least one of them) based on this debate, as he’s the only one defending the authority of sequels over the originals. To prove his point, he mentions The Godfather, Part II as the better film over its predecessor. Well, that’s debatable. What isn’t debatable is that as the sole character to think sequels are better he’s sure to end up being the killer.

In typical sequel format, Scream 2 attempts to up the ante, as evident with the increased number of characters and ultimately body count. And since the majority of the central cast makes it into Scream 3, several “filler” characters are introduced only to meet their demise. Sarah Michelle Gellar, fresh off her appearance in Williamson’s I Know What You Did Last Summer, gets tossed out a window. Portia de Rossi and Rebecca Gayheart play bimbo sorority sisters. Joshua Jackson makes a brief appearance, if only for Williamson (also the creator of Jackson’s show Dawson’s Creek) And Laurie Metcalf, made popular on TV’s Roseanne, appears as a Gail Weathers wannabe.

Once again, the opening scene is the best. Epps and Pinkett-Smith share dialogue that addresses how African Americans rarely appear in slasher movies, and when they do, they never make it out alive. Minutes later, when their characters are dead, the audience is served with a hearty dose of satire. Some discussion also ensues about horror movies being responsible for violence (the quote “movies don’t create psychos; movies make psychos more creative” from Scream comes to mind). But this commentary fails to have any significance when the bloody and decidedly uncreative plot plays out. And that’s about where the radical lampooning ends and the standardized slasher formulas begin to unfold. Campbell, Cox, and Arquette’s characters are hardly interesting enough to keep the audience’s attention, especially when the killer’s identity becomes so blatantly obvious that it’s insulting when the movie even bothers to suggest anyone else.

Scream 2 simply isn’t scary. It’s predictable and, at least in reference to the central mystery, downright stupid. Instead of balancing horror with satire, the shock elements recede into the backdrop. While the dialogue dwells on the fact that sequels typically attempt to out-do their predecessor, the movie itself falls into the trap of offering lesser chills against Williamson’s tongue-in-cheek dialogue, and fails to achieve the same equilibrium of scares and wit. It’s sorta Much of it is entertaining, but just not in the right ways. The surprise box-office success of the first (which earned more than $100 million) demanded a sequel, but audiences could have waited for longer than the very next year for the next chapter. And given some obvious problems with the story, one can’t help but wish they had. Still, the sequel would earn the franchise another $100 million, proving that, as with most horror franchises, when audiences are hooked there’s little preventing them from buying a ticket.