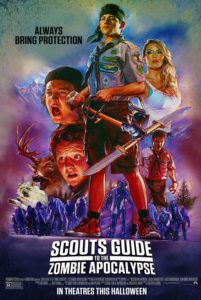 Overworking its undead fingers to the bone yet determined to keep going, the zombie subgenre has all but outstayed its welcome for theatrical releases. Genuinely scary zombie movies now bow to AMC’s The Walking Dead, which is in the middle of another thrilling season upon this review. What we’re left with are broad horror-comedies, mindless entertainments like Burying the Ex or the absurd Warm Bodies). Put Scouts Guide to the Zombie Apocalypse on that list, a gross-out sex comedy disguised as a zombie yarn. Imagine if Superbad fashioned itself with Zombieland in mind, and you have some idea of where this familiar, vulgar, and always juvenile flick about horny teens fighting brain-eaters is going.

After a slapstick outbreak in a research lab, the nearby town of Deer Field (according to a road sign, just a few miles down the road from Haddonfield, the location of John Carpenter’s Halloween) is soon overrun with zombies. No matter, the Scouts come to the rescue—except, they’re not the Boy Scouts of America. That venerable institution kept its distance from the production for obvious reasons. The film’s so-named “Scouts” wear a similar tan getup, complete with shorts, a brown bandana, and merit badges. For all intents and purposes, they’re Boy Scouts. Our heroes are niceguy Ben (Tye Sheridan, who began his career with impressive arthouse titles like The Tree of Life and Mud), horny jerk Carter (Logan Miller), and their chubby compadre Augie (Joey Morgan). Carter and Ben have remained in their three-member troupe out of loyalty to Augie, but they want to move on to discover girls in their junior year of high school.

After a falling out with Augie over this very issue, Carter and Ben have a traumatic experience at the local strip joint and soon realize Deer Field has been evacuated and overrun by zombies. They team with a badass cocktail waitress with a shotgun, named Denise (Sarah Dumont), the kind of character that would be a strong female role if it wasn’t for her strip club waitress job at “Lawrence of Alabia” and her large breasts pouring out of her shirt. Indeed, women are objectified throughout Scouts Guide thanks to Carter’s endless search to “get laid”. Take the scene where, narrowly outrunning a herd of undead, Carter shuts a fence on a female zombie in such a way that her shirt bursts open, filling the two-story-high theater screen with zombified fake breasts. At times like this, the movie seems as if teenage boys wrote the screenplay.

Having written several Paranormal Activity titles and directed last year’s Paranormal Activity: The Marked Ones, director Christopher Landon also co-wrote Scouts Guide with Carrie Evans and Emi Mochizuki. Their zombie rules, if you can call them that, aren’t exactly clear. Sometimes the zombies seem reduced to a slow crawl; other times they can sprint. Borrowing from George A. Romero’s later zombie films, Landon’s undead also seem to retain memories, such as Britney Spears lyrics (in a downright stupid scene). They don’t even look consistent. One of the zombies appears with a protruding spine like something out of Resident Evil, running gorilla-style on all fours. The infection also turns animals into bloodthirsty monsters, including a deer early on, and later a horde of cats owned by a crazy cat lady (Cloris Leachman).

At any rate, the survival scenario offers an excuse for the three Scouts to use their ingenuity to make weapons and prove that Scouts are cool. Meanwhile, Ben seeks to realize his longtime crush on Carter’s sister, Kendall (Halston Sage), whose current douchey boyfriend (Patrick Schwarzenegger) gave the Scouts the wrong directions to a cool-kid party, just to keep them from geeking-up the event. Unfortunately, it takes about 80 of the movie’s 92-minute runtime for the Scouts to take action. Everything before that feels like your standard teen-boys-who-must-get-laid situation; and frankly, this critic is tired of seeing movies in which teenage boys behave awfully for two acts, only to be redeemed in the last few moments by some imbalanced act of kindness.

Although the movie is screening at AMC Theaters, Scouts Guide to the Zombie Apocalypse isn’t available everywhere. The distributors at Paramount Pictures are trying out a new distribution strategy by releasing movies in theaters and then, after 3 weeks, putting it on VOD. Paramount’s Paranormal Activity: The Ghost Dimension and Scouts Guide to the Zombie Apocalypse are the first of these, and theater owners were none too happy. Because most theater chains refused to book them, these titles appeared in about 1,350 theaters (about half the usual of a wide-release). However ineffective this processes may prove commercially, VOD is where this dull horror comedy belongs. With copious amounts of gore and adolescent scatological humor, the apostrophe-lacking title should give you some indication of this movie’s lack of smarts.