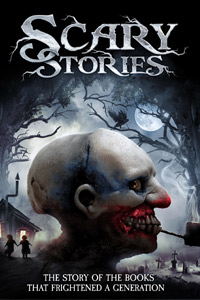 It’s rare that I am embarrassed for a movie—that watching it has made me feel embarrassed for the filmmakers, those who appeared in it, and the fact that it exists at all. But the new documentary Scary Stories is such a movie. A slapdash effort assembled by documentarian Cody Meirick, it sets out to explore Alvin Schwartz’s children’s book series Scary Stories to Tell in the Dark, first published in the 1980s. Before R.L. Stine and those like him, Schwartz released three short volumes of haunted tales, all impeccably researched and based on actual folklore. In the doc, Meirick seems to want to get at what draws people to these stories, as well as the importance of young people dealing with their fears through literature.

As a child exploring my elementary school library, Schwartz’s books caught my eye—not so much the words at first, but the graphic illustrations by Stephen Gammell. My favorite was “The Red Spot,” a twisted tale about a boil that begins to grow on a young girl’s face until, at last, it bursts to reveal a hundred baby spiders hatching from the eggs their mother laid in the girl’s cheek the night before. It was one of my first introductions to body horror, and it has stuck with me ever since. Scary Stories is full of impassioned sharing and personal experiences from Schwartz’s fans—to the extent that the movie’s subject seems to be more about the fandom than the books or author. There aren’t many experts in Meirick’s group of talking heads; his primary source is librarians and horror enthusiasts, and he shoots their interviews in a crumbled building to give the movie a faux spooky atmosphere. He also spends a lot of time interviewing young artists inspired by Gammell’s images. Somehow, Meirick has encapsulated the appeal of a Schwartz fan club into a movie.

The meandering approach to Scary Stories, combined with a less-than-compelling group of interviewees, makes this a very long 84-minute documentary. Technically speaking, the audio sounds like it was recorded in a hallway; the camera is often out of focus; the animated transitions look like a high school project; and the editing is downright funny, comprised of what-were-they-thinking B-roll footage. At one point, Meirick cuts to slabs of bacon cooking on a small apartment kitchen stove. This image seems to carry on forever, until it’s revealed that the bacon belongs to a woman, and she’s cooking it for her son, whom she hopes will one day read Schwartz’s books. Then Meirick follows the same woman to a tattoo parlor, where her tattooist talks about Gammell’s influence on him. A lot of Scary Stories carries on aimlessly like this.

At another point in the movie, Meirick cuts to a close-up of Brie cheese being awkwardly prepared by Schwartz’s middle-aged son, Peter, who fumbles to remove the rind with a knife until a woman off-screen rescues him. Peter didn’t get along with his father. He admits to telling his father that the Scary Stories to Tell in the Dark series was inconsequential. The father and son never reconciled before the author’s death in 1992. Now, Peter struggles to remove the rind from Brie. But if Peter knew anything, he would know that his father’s stories were great, and Brie is better with the rind.

Somewhere between Meirick’s odd proclivity for shooting food preparation rituals and inconsequential interview subjects, he explores a somewhat interesting history about a mid-1990s debate to have Schwartz’s books removed from school libraries. But the documentary doesn’t delve into issues of censorship or the debates behind it—not with any substance. Scary Stories is more interested in what people have to say about their experiences with Schwartz’s writing. For the uninitiated, however, this may prove frustrating, as the actual information communicated about the author is limited. At the same time, Meirick doesn’t have anything to say about fandom either, whereas a film like Trekkies (1997) at least pokes loving fun at Star Trek while still appreciating the source material.

If you’re wondering why this doc exists, the answer is simple: It’s a rushed and sloppy cash-grab meant to earn a few bucks by coinciding with the upcoming feature film adaptation of Schwartz’s Scary Stories to Tell in the Dark.