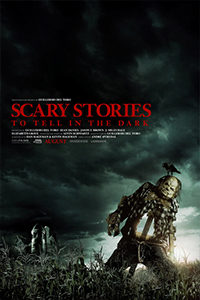 Gather round, kiddies, and director André Øvredal will tell you some spooky campfire stories from Alvin Schwartz’s children’s book series, first published in the 1980s. Scary Stories to Tell in the Dark weaves together some of the author’s most famous tales of the macabre into a feature-length movie, recreating them with a dark sensibility that pushes the limits of its PG-13 rating. Rather than an anthology like Creepshow (1982) or this year’s Nightmare Cinema, it intermingles several individual stories into a single, involving narrative. For a certain age group who grew up reading Schwartz’s nightmarish texts, especially editions featuring the horrific illustrations by Stephen Gammell, the movie will be a worthwhile and ably crafted nostalgia trip, even though some aspects of its making reek of a familiar commercial formula. Produced by Guillermo del Toro, it’s a gruesome YA experience that, thankfully, never feels like the family-friendly romp that was 2015’s Goosebumps.

Del Toro also contributed to the screen story, written by Dan Hageman and Kevin Hageman. It takes place in the small Pennsylvania town of Mill Valley in 1969. The action centers around a group of young teens who uncover their town’s dirty secrets of supernatural origin, including an age-old curse and several child-killing monsters. And if you’re thinking the material sounds familiar to Stephen King’s It, adapted by Andy Muschietti into a blockbuster-sized horror flick in 2017, you’d be right. Scary Stories to Tell in the Dark has been constructed to exploit the recent, wildly popular interest in throwbacks to material by King and Steven Spielberg from the 1980s, such as Netflix’s Stranger Things. The period has its own hallmarks: the television and radios situate the story amid Richard Nixon’s election and the Vietnam draft, creating a shorthand ominousness and sense of national dread. The fifty-year-old setting also affords drive-in screenings of Night of the Living Dead and Donovan’s “Season of the Witch” on the soundtrack, an apt tune given the Halloweentime backdrop, lending the production an autumnal eeriness. And while this milieu has all been used before to similar effect, it’s far preferable to our modern age of smartphones and ironic snark.

Øvredal and the Hagemans create a mosaic of Schwartz’s stories by centering on a trio of friends—the bookish Stella (Zoe Colletti), the hyperactive Chuck (Austin Zajur), and the nerdy realist Auggie (Gabriel Rush). Together, they head out on Halloween night to the local haunted house, where they discover the storybook of Sarah Bellows, an unfortunate young woman who committed suicide decades earlier. As the legend goes, Sarah wrote scary stories that came true and killed the children of Mill Valley. Inevitably, our heroes, joined by the young draft dodger Ramón Morales (Michael Garza), find Sarah’s book of twisted tales and try to survive as new stories materialize in its pages before their eyes, written in blood no less. Worse, the stories come to life and feature the names of the resident Loser’s Club, who are targeted by a series of hideous monsters. “You don’t read the book, the book reads you,” Stella explains in a laughable line of exposition. But it’s not so laughable when the movie’s excellent production design brings Gammell’s deathly creatures to life. 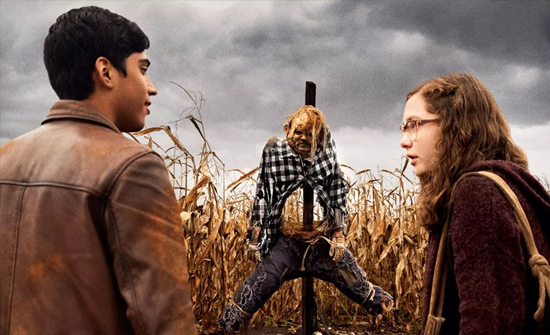 Øvredal, versed in genre fare from his The Troll Hunter (2011) and The Autopsy of Jane Doe (2016), brings an edge to Scary Stories to Tell in the Dark. In all, the movie uses a handful of Schwartz’s more than 80 short stories, picking some of the most iconic of the bunch, and Øvredal seems to channel our childhood imagination for the most part. He realizes creatures like the corpse from “The Big Toe” with an excellent sense of fright and use of darkness, and the horrific scarecrow from “Harold” makes quick work of Tommy (Austin Abrams), a classic Stephen King bully type. At the same time, a few of the references will feel obscure and somewhat unexplained. I confess to being baffled by the refrain of the so-called Jangly Man, who announces “Me Tie Dough-ty Walker!” to perplexing effect. Likewise, the popping of the titular boil from “The Red Spot” is something best left to our imagination, not modern CGI.

There’s a lot that doesn’t work about the movie, most of which involves its attempt to create a franchise and establish resonant backstories for the characters. A subplot about Stella’s abandonment issues gives way to some impressive acting on Colletti’s part, but the dramatic moments where she attempts an emotional understanding with her sad-sack father (Dean Norris) feel underwhelming. Similarly, not enough time is spent establishing the fate of Sarah Bellows, which could have elevated the terror into an affecting tragedy on par with del Toro’s Crimson Peak (2015). Instead, the backstory feels rushed to keep the plot mechanics ticking along. Elsewhere, the material feels edited down to meet the requirements of a more marketable rating and runtime, creating a few plot holes in the process (also implanting hope for an extended and more visceral director’s cut). The movie also falters in its persistent need to exploit the intellectual property for future sequels. The tacked-on conclusion suggests the horror stories will continue, but why or how isn’t made clear on the screen. The last shot of several characters driving into the distance is downright confusing: Where are they going, and why is this specific group of people together? If the movie performs well at the box-office, however, the carrot has been dangled.

When Scary Stories to Tell in the Dark brings Gammell’s art to life, it’s terrifying. More than once, I caught myself watching, mouth agape, at some grotesque and anxiety-ridden image. But the experience is rooted in nostalgia and will appeal best to those vaguely familiar with Schwartz’s books, and perhaps not the target demographic. Audiences unfamiliar with the source material may wonder about the origins of these monsters, oblivious to the fact that Schwartz often mined classic folk tales passed down from generation to generation through the oral tradition. He put new versions down on paper and haunted millions of readers, while he also disturbed parents who called for the books to be banned from their local school libraries. Øvredal and del Toro have released an adaptation that is entertaining enough, but somehow their need to create a franchise gets in the way of making a completely satisfying movie.