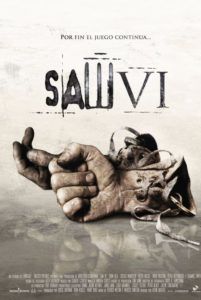 You already know what you’re getting with Saw VI. There’s nothing different or unique about this entry in the franchise, now the most profitable horror series in movie history. Industrial machinery rips plenty of bodies apart, per usual, and several more of the Jigsaw killer’s victims are forced to mutilate themselves in the name of his perverse ideology. The meat of the movie unfolds in flashbacks and choppy editing. The ending comes with your typical, now yawn-worthy revelatory twist. It’s all very anonymous and detached, furthering the “torture porn” categorization of these movies. If that’s not your thing, why are you reading this review?

This franchise is critic-proof, relying entirely on the opening weekend rush and home video sales to sustain its profitability. Critics aren’t offered pre-screenings, so we see the movie on our own time, enduring a significant blow for you, the moviegoer. But no matter how many bad reviews any Saw movie receives, it won’t matter. By the time lousy word-of-mouth spreads, the movie, in this case, made for a mere $11 million, has already earned back its budget and entered the realm of success. Indeed, Saw VI’s opening weekend take was $14.8 million. This is the smallest opening for any Saw film yet, and still, it remains profitable. When previous entries have made upwards of $20-30 million on opening weekend, however, the question remains: Are audiences slowly growing fed up? I hope so. I really do.

Barely making it through Saw VI made me realize, all over again, what a complete waste of time these movies are. Maybe it’s that they’re released every year on Halloween (advertisements sport the tagline, “If it’s Halloween, it’s gotta be Saw!”), without a break. It’s a constant year-after-year beating of the moviegoer’s senses. Maybe it’s that there’s no point in getting invested in the characters because they’re all going to die at some point, however redeemable they may be. Maybe it’s the way the filmmakers have entirely avoided trying anything new beyond their proven formula—no “Jigsaw Goes to Hell” or “Jigsaw in Space.” And why should they divert from their established, working recipe when it’s served them so well?

The story in this movie involves William Easton (Peter Outerbridge), a health insurance claims officer deemed guilty for using his objective risk analysis formula to approve or deny insurance claims. Jigsaw (Tobin Bell) appears only in flashbacks, while his disciple Det. Mark Hoffman (Costas Mandylor) eludes the police as he follows in the killer’s footsteps. Hoffman puts Easton into a sick game; he’s forced to decide who lives and who dies, as Hoffman subjects random employees from the insurance company’s office to torture. Did the cleaning guy deserve to be crushed to death for being a smoker? Whereas Jigsaw kept the suffering isolated to an individual and tried not to harm those he judged innocent, Hoffman doesn’t care who gets it.

It’s all very bloody, of course, so gore-hungry viewers will get their fix: The movie opens with two people, a fat man and a skinny woman, with sixty seconds to slice as much flesh from their bodies as possible. Whoever chops off the most survives. The fat man grabs his rolls and starts to cut away; the skinny woman lifts her shirt and realizes—whoops—she’s thin, so she decides to hack off her arm instead. Among other mechanisms of pain, the reverse bear trap makes another appearance, so does searing hot gas and a merry-go-round attached to a mechanized shotgun. Someone is hung with barbed wire. A woman is shot in the head with a dart. Hydrofluoric acid melts someone in half. Is that enough for you?

Perhaps, two or three sequels from now, these movies will begin to lose money. Maybe, but not likely. There’s enough profit earned from the previous five movies in this franchise to make another dozen or more Saws without losing money. And doubtless, the filmmakers intend to do just that. By now, you know if you want to watch Saw VI or not. But if even one of you reads this review and decides to avoid future sequels altogether, then I’ve done my job. I will continue to stomach them as part of my duties as a movie critic, but the rest of you have no reason to suffer. Save yourself. Avoid this crap.