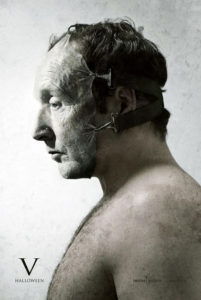 When trying to recall the events of the previous Saw movie, my memory fails me. I remember half-forgotten characters who popped up out of nowhere and nonsensical plot developments that arose every few minutes, sparking several moments of dumbfounded confusion. The whole thing was forgettable at best. Are the details important? Maybe. Though fans of the movies, I believe, tend to watch the films less for the twisting manner in which the plots unfold, and more for the twisting manner in which bodies are mangled and ripped to shreds by obscure homemade torture devices.

Saw V follows the series’ tradition of flashbacks, and flashbacks within flashbacks, using enough clips from parts I-IV to fill the gaps in your memory. The result plays like the now-cliché television device of the Clip Show. You remember them—your favorite program needed to fill some airtime and, rather than offer a rerun, they shoot a loose story around the character remembering what happened way back when, and insert clips from previous episodes to serve as memories. And while the Saw movies have used flashbacks in the past to present unreliable narrators and key information contained in victims’ recollections, this latest sequel gets lazy and uses a considerable amount of footage direct from its four predecessors. Their primary concern is not a forward-moving story, but conceiving new and convoluted and gruesome ways to present onscreen death.

About that: There hasn’t been much use of an actual saw in the Saw movies since the very first entry, not since Cary Elwes famously hacked off his own foot. And, if memory serves me, the killer’s throat was cut in Saw III with a circular saw. Does that count? It’s always some mechanical gizmo involving pulleys, heavy metal, and sharp objects. Perhaps the next sequel should be about a group of lumberjacks who are tested by the killer, in turn allowing the series to get back to the title’s roots with chainsaws, reciprocating saws, crosscut saws, and so on. Then again, it’s possible the title is actually a nickname short for Jigsaw, the moniker of the series’ aggrandized murderer and misguided philosopher (Tobin Bell). “People call me Jigsaw, but my friends call me ‘Saw,’” he might say.

Anyhow, the plot of Saw V involves more amoral people “tested” by means of elaborate devices set on short timers. Unless the subjects put themselves through excruciating pain and fast, they will not endure and will not be absolved. Surviving such excruciating circumstances is supposed to give people a chance to prove themselves worthy of life. That’s Jigsaw’s sick logic, anyway. But something is amiss, which we learn from the first scene in which a sharp swinging pendulum cuts a victim in half, even though he adhered to the killer’s rules of the game that should have freed him. A murderer murdered someone. Go figure.

That brings us to Agent Strahm (Scott Patterson), who finds himself with his head in a glass box that’s slowly filling with water. He realizes he’s not supposed to escape. There were no rules read to him per Jigsaw’s usual schema. There’s no lesson being taught. Innovative to the last, Strahm stabs himself in the throat with a pen to create a breathing hole as his head-tank fills. If Jigsaw wanted Strahm dead, why didn’t he just shoot him, instead of arranging an intricate drowning mechanism? The answer: Someone else, namely detective Hoffman (Costas Mandylor), has taken over Jigsaw’s torturous work. Or maybe Hoffman was always Jigsaw to begin with? When Strahm is later recovering from his head-in-a-box ordeal, he’s warned by one of the killer’s many leftover videotapes not to pursue the otherwise closed Jigsaw case. But he does, and everyone knows what happens when you don’t listen to Jigsaw.

What any of this has to do with the five people who find themselves shackled by the neck, in a room with exploding nail bombs, along with five glass boxes each with a key inside, I cannot be sure. They’re told by the recorded voice of the dead Jigsaw that they must work together to survive, but instead, they start killing one another to advance to the next task. Their scenes are intercut between Strahm’s, except their significance is nil, and the film fails at bringing the two storylines crashing together in the usual Saw movie format. And what about Jigsaw’s ex-wife—what’s she up to? The movie asks that question, but it leaves the answers for one of the dozens of future sequels.

Second Unit Director on past Saw films, David Hackl takes over the helm for Darren Lynn Bousman, but he offers nothing unique to the ensuing choppily-edited sequences of bloody violence and ever-constant flashbacks. Each sequel adopts the look of a Nine Inch Nails music video, complete with dark, industrial imagery and a wannabe sense of profundity. Hackl gives Twisted Pictures, the producers behind the Saw series, and other junk like Dead Silence, another cookie-cutter horror yarn straight off the conveyor belt and into theaters. Sadly, the one or two weeks audiences are interested will be just enough to earn the film $50 million or so, no doubt earning a sequel the green light. And why not? The writers in this series have proved there are no limits to their open-ended storytelling, working in terms vague enough to allow them to fill in the blanks next year when the sequel’s sequel comes out. If they keep introducing characters out of the blue, claiming they were always there and always plotting for this or that moment, eventually they’ll run out of stories, right? I mean, they can’t keep this up forever, can they? Please. Anyone. Tell me there’s going to be an end.