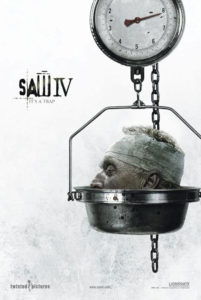 Saw IV is about tying up loose ends—getting rid of (almost) all those surviving characters from parts I-III. Since nearly everyone died in the last one, including the series’ villain, minor actors with barely a line of dialogue in previous entries now receive their own starring roles. But wasn’t there a reason they were only in the background before this, likely because their characters were then considered inconsequential filler roles? Or should we believe that the filmmakers actually intended for the guy out of focus and barely in the shot in Saw III plays a pivotal role in Saw IV?

Forensics man Hoffman (Costas Mandylor) and SWAT team member Rigg (Lyriq Bent) each had such a minor presence in the last one or two entries that you probably don’t remember them. So unless you made a note of every face in every scene, you’ll probably think these two are new characters. And if you don’t recall them, Saw IV conveniently flashes their brief scenes from prior entries onscreen, just in case we’ve forgotten who these guys are. And I assure you, we have.

When The Jigsaw Killer had this throat slit—or sawed—in Saw III, the writers for this sequel were faced with an unfortunate problem: How do you keep a killer killing when the killer’s been killed? Does Jigsaw inexplicably return to life as Jason does in the Friday the 13th series? Do the writers claim that Jigsaw never died—that it was a dream, or that it wasn’t really Jigsaw who died? Perhaps Jigsaw made a pact with Satan for eternal life? Or maybe Jigsaw will now terrorize our nightmares, those of us who live on Elm Street?

The filmmakers provide a solution, one already eating a rotten hole right through the first three entries: Flashbacks! Saw movies couldn’t exist, nor trick us as much as they do, unless the filmmakers told half the story told in a separate timeline. So even though The Jigsaw Killer is dead, Tobin Bell (the actor portraying him) has more screen time than anyone in Saw IV. Here, thanks to flashbacks from the confessions of Jigsaw’s ex-wife, we explore John Kramer/Jigsaw’s pre-murderer days. If you’ve ever wondered what tragic, emotional events led to John becoming Jigsaw, this sequel will put your curiosity to rest.

While we learn Jigsaw’s silly origin story, we’re subjected to a convoluted plot of epic proportions. It involves Rigg attempting to find the kidnapped Hoffman, as well as the missing Det. Matthews (Donnie Wahlberg), who, if you recall, is still alive somewhere after his role in Saw II and a brief appearance in Saw III. We see Hoffman and Matthews are victims held captive in a warehouse somewhere. Hoffman is tied to a chair, and on the other end of a tilting slope, Matthews is hanging from the neck with a block of melting ice for a foothold. Jigsaw wants Rigg to set aside his general obsession with catching the bad guy (which sounds more like Jigsaw is asking Rigg to be a bad cop), as it’s an obsession that has affected Rigg’s family life. If Rigg just gives up his investigation, Matthews and Hoffman will go free.

But then there’s Agent Strahm (played by Scott Patterson from TV’s Gilmore Girls, who sports what look like new hair plugs and is considerably less charming here). The information he’s received tells him that two police officers are in danger from Jigsaw’s brutal tests. Who the police officers are and when Jigsaw will test them remain a mystery. Somehow, this all relates to Det. Kerry, who was torn apart in Saw III. But then what about the two guys (one whose eyes were sewn shut; the other whose mouth was sewn shut) who were chained up and beating each other to death in the beginning—who were they? And what does any of this have to do with Jigsaw’s first murder or his ex-wife? And since both he and his previous accomplice Amanda are dead, who prepared this latest strain of torture gizmos?

My review thus far has asked a lot of questions and unpacked a lot of plot, I realize. When movies are as stupidly complex as this, questions are bound to arise. With the first three Saw movies, I’ll admit that I could at least follow the basic plotline and see what the filmmakers were trying to do with their story, thin as they are in this series. With Saw IV, for the first time in this series, the structure is lacking. At least in previous entries, we could follow the conflict. Here, we’re lost in a garbled display of over-editing and flashy direction. And oddly, even the gore, which is the sole point of a film series like Saw, is shot as if the director hoped it would be unintelligible. Not only is the movie sometimes visually incomprehensible, but what we do see is boggling.

Darren Lynn Bousman is behind the camera again, as he was with the last two entries. This time around, his movie is dark—and I mean literally dark, as in lighting. This isn’t the David Fincher kind of dark, where everything remains visible but just dimly lit. It’s as if Bousman didn’t want us to see certain scenes, so he fills them with an engulfing blackness, making them visually imperceptible. Saw IV begins (or does it?) with a gruesome autopsy of John Kramer’s body. Inside his stomach is a mini tape, covered in wax to protect it. The tape plays for Hoffman, telling him the game isn’t over. Even in death, Jigsaw claims we will feel his presence. Translation: we can expect more Saw movies—a lot of them. Perhaps until the end of time. This makes me sad inside.