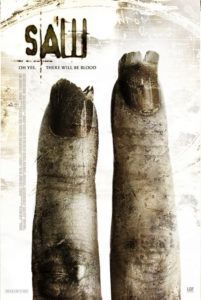 The first Saw ends with its killer, Jigsaw (Tobin Bell), revealing that through his murders, he tests his victims in hopes that they’ll survive. His “lesson” mirrors his own near-death experience, from which he learned to appreciate life. And instead of letting people alone and allowing them to be their depraved selves, he forces his revelation onto others. Consider Jigsaw a public servant, giving degenerates and moral scabs a second chance. If only his victims would think of it that way when they’re being tortured to death.

Hostel and Wolf Creek were released in 2004, combining with Saw to inaugurate the term “torture porn,” coined by David Edelstein, into movie lingo. In this sub-subgenre of horror, the plot revolves around elaborate deaths, which make up the film’s rhythm. Just as pornography exists as a few notes accompanying a primary arrangement of sex scenes, torture porn’s rhythm works through scales of detailed suffering. Every twisted piece of flesh, incision, broken limb, or chopped-up organ is filmed with clarity and shoved in the viewer’s face. It’s a lamentable, boring way to make horror movies, especially ones as self-serious as the Saw movies.

Saw II begins with tough guy Detective Matthews (Donnie Wahlberg) covering another Jigsaw murder. Investigating the scene, he finds a clue that leads him to Jigsaw’s lair. Just as in the first movie, Murderer Headquarters is a seedy, abandoned industrial warehouse filled with every imaginable torture device. There, Matthews finds Jigsaw hooked up to an IV, clearly still suffering from an incurable brain malady (perhaps the same one that justifies his demented logic). In his usual cryptic dialogue, Jigsaw confronts Matthews and exposes the dirty cop’s rough, immoral on-the-job practices. Then, he tells Matthews he wants to play a game.

Jigsaw is your typical movie serial killer—meaning he’s never fully revealed, and he’s not that interesting. His sick reasoning and desperately profound rants about his own moral superiority are absurd. Here, he locks up a group of people in a house who-knows-where, including Det. Matthews’ son Daniel (Erik Knudsen). A slowly-acting gaseous poison is released into this sealed house, giving Jigsaw’s prisoners two hours to find hidden vials of antidote before they die. Rooms filled with the usual slew of torturous gizmos are assigned to the house’s seemingly nameless characters. Will Detective Matthews save his son in time? Do we care?

You’d think that after watching your housemates drop like flies to complicated torture devices, the remaining few would wise up, band together, and try to outthink their puzzles. You’d be wrong. Among them is Xavier (Franky G), the steroid-infused drug dealer of the group who begins killing the others while looking for a way out. He gets his mitts on Amanda (Shawnee Smith), the once-reformed heroin addict who survived Jigsaw’s test in the first movie. She’s now back on junk and here for another test. In one gruesome scene, Xavier throws Amanda into a vat of syringes to find a key that will lead to an antidote. She waves her arm back and forth among countless needles, infecting herself with awfulness I’d rather not think about.

Scenes similar to this repeat themselves. One involves a man crawling into an incinerator, which, of course, locks him inside, burning him alive. Each of Jigsaw’s victims is sectioned off in their own room, each with a specific torture device, and each meets their own grisly fate. Elaborate deaths and killing apparatuses are of greater importance than the character dying in this movie. We feel like we’re entering separate rooms in a peep show, each with a different spectacle we can’t look away from. Eventually, our quarter runs out, and we move on to the next one.

Creator of the series and director of the first, James Wan, hands the reigns to director and co-writer Darren Lynn Bousman. Together, Bousman and writer Leigh Whannell construct their version of a skewed morality play where Jigsaw’s devices pull “guilty” victims apart like shredded beef in a crockpot. The manic editing carries over from the first to near-unwatchable extremes. Ghastly torture apparently isn’t intense enough—it has to be sped-up and viewed from every which way, cut and reformed like twitching fits of film.

After the first Saw, audiences now expect twists and turns galore along with their unhealthy appetite for bodily carnage. By the end of this sequel, we realize all subsequent sequels will rely on this formula. And since these films are relatively cheap to produce and earn mad money, we can likely expect the Saw series to develop into another cookie-cutter horror franchise like Friday the 13th or A Nightmare on Elm Street in the 1980s and 1990s. I can’t say I’m looking forward to it.