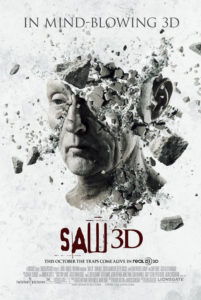 Advertised as “the final chapter,” Saw 3D marks the franchise’s seventh and supposedly last entry. In all, with each film averaging about 90-minutes, the unfortunate souls (myself included) who have followed since the 2004 original have wasted more than ten hours of their lives on increasingly pointless torture porn. That’s a day’s work, plus overtime, watching bodies sliced and diced, torn apart, and exploded for not much reason other than to sell tickets. You could have watched Lawrence of Arabia a little under four times or almost finished The Lord of the Rings Trilogy. You could have organized your cabinets or read that book that’s only gathering dust. There are a lot of things you could have done, but you chose to watch the Saw movies. How do you feel about that?

In a last-ditch effort to make sense of the events since the start, this seventh movie doubles back in typical form, using flashbacks and forgotten characters to fill in the blanks about current events. As the plot unfolds, you’ll learn the gristly fate of the Jigsaw killer’s ex-wife (Betsy Russell). You’ll learn that there are far more Jigsaw victims and survivors than the seven movies have shown us. You’ll discover what happened to Dr. Lawrence Gordon (Cary Elwes), who disappeared after the first movie. And you’ll be fed a load of malarkey suggesting that the franchise has come full circle. What you won’t learn is why anything onscreen deserves your full attention.

This time around, the Jigsaw killer’s primary target is Bobby (Sean Patrick Flanery), a fraud who claims to be a Jigsaw survivor to promote his best-selling line of self-help books. Of course, Jigsaw doesn’t like being made a fool of, which means Bobby gets to play a game. As those close to him experience unnecessary death, Bobby learns that lying is bad. Meanwhile, Internal Affairs officer Gibson (Chad Donella) tracks Det. Hoffman (Costas Mandylor), Jigsaw’s murderous disciple, who in turn tracks Jigsaw’s ex-wife, who has turned Hoffman over to the authorities for a plea bargain. Got that? Moving on, Hoffman plans one final round of death before retiring to somewhere with a bag of money. In the process, he kills half the police force and everyone else in his way to escape.

It turns out the big finale planned for the Saw franchise involves body parts flying at the screen in whoa-inducing 3D. While not post-converted like so many Hollywood titles waving the 3D banner, the movie’s gimmick receives a fumbling treatment from director Kevin Greutert. He unintentionally gives the typical dead-serious approach to Saw movies a mild camp value. After all, how can someone not laugh when intestines fly at the viewer, or a massive killing machine aimed at some victim appears to be coming at you. (It’s times like these when one must kick themselves for fondly remembering Resident Evil: Afterlife, and Paul W.S. Anderson’s expert handling of the 3D device.) Could 3D be the ultimate tool of ironic artistry, where filmmakers hope audiences react one way (in fear), but they respond with mocking laughter instead? Yet, when box office reports from the opening weekend chart the franchise’s typically huge profits, how the audience reacted could hardly matter to the filmmakers.

Indeed, if artistic integrity concerned anyone involved in the Saw franchise, well, then, there wouldn’t be a Saw franchise. The question is, since the series remains so profitable, averaging $50 million in returns from low budgets around $15 million per movie, why end it? From an artistic point of view, any argument in favor of another sequel is insane; but from a business perspective, which drives Hollywood, keeping the franchise going allows Lionsgate an annual sure-thing profit earner. Are the writers just realizing there hasn’t been a story since the first entry, which itself wasn’t much of a story at all? They’ve done a bang-up job of concocting nonsensical twists in endless sequels thus far, so why should that bother them suddenly now? The question remains, why stop?

The answer: Lionsgate likely has no intention of ending the franchise. You can bet money on it. Friday the 13th: The Final Chapter tried to say goodbye in 1984, then again in 1993 with Jason Goes to Hell: The Final Friday. New Line Cinema tried to say goodbye to Freddy Krueger with Freddy’s Dead: The Final Nightmare in 1991. But they all get remade or made over somewhere down the road. Maybe Saw comes back with (yet another) copycat killer to replace Jigsaw’s absurdly elaborate scheme. Maybe the series will find a new locale and do “Saw in space” or some other gimmick used by an earlier horror franchise. Or maybe we’ll see a prequel about Jigsaw’s early life. Or maybe they’ll reboot the franchise altogether with another actor playing Jigsaw. Your guess is as good as mine. But given that this series remains the most profitable in horror history, there’s no way the studio will just walk away.

As for Saw 3D, it’s more of the same: choppy editing, flashbacks within flashbacks, absurd plot twists, and fetishistic delight in gore. To be sure, this may be the goriest of all Saw movies. And 3D only makes it worse by throwing blood and guts into the third dimension. Nevermind the story; these movies have always been about gore. Fans wonder, How far will this year’s Saw movie go? Pretty far, especially after a gag-inducing fish hook scene. Where plot is concerned, deciphering the chronology and just what the hell happened over seven Saw movies is something this critic is unable explain. If you bothered to pay close enough attention to these movies, kudos to you. And if you plan to continue, chances are, despite claims that this is the last one, you’ll be watching plenty more Saw movies in the future.