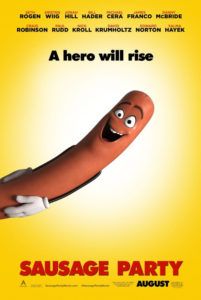 Should parents make the mistake of showing their youngsters Sausage Party, an R-rated, CG-animated film about the lives of grocery store foodstuff, they will not find just another Toy Story-lite family adventure in which inanimate objects come to life. Although, it does follow that basic Pixar model. Rather, parents will end up having to explain a lot; the title’s innuendo should suggest as much. But there’s more than sexual insinuation and juvenile visual metaphor at the center of this comedy. Imagine having to explain to your children why the film’s atheistic hero can’t just be happy and believe what he’s told to, or explain why there are so many foods with different belief systems in a single grocery store. Plus, the film contains no end of surreal sexual suggestiveness; and no one wants to explain to their child why the talking hotdog wants to “jackrabbit” into the talking bun, nor should they have to explain why the talking douche desperately wants to insert itself into someone, anyone.

Producer, star, and co-writer Seth Rogen has said Pixar and DreamWorks animation houses served as inspiration for the film. Granted, the film’s way of showing its appreciation (a bumper sticker reads “Dixar”) isn’t always flattering, but at least the filmmakers acknowledge their influences. Despite occasional descents into potty humor and the finale’s supermarket orgy sequence, I maintain the film is smarter than your average animated picture. Sausage Party opens with a song, performed by personified food inside a “Shopwell’s” superstore, outlining their belief in “the gods” (human consumers) who select a chosen few from the shelves and escort them into “the Great Beyond.” Our hero is Frank (voice of Rogen), a hot dog sealed inside a package with his runty pal Barry (Michael Cera). Alongside a few other sausages, they lust after the nearby package of buns, including Frank’s would-be girlfriend Brenda (Kristen Wiig). Frank and Brenda pray the gods will pick them both, so they can finally “be together.” As we learn, sexual intercourse is forbidden between those who haven’t yet made it to the Great Beyond.

But after a jar of honey mustard (Danny McBride) is returned, traumatized, he frantically claims the Great Beyond isn’t real—that there’s something far more terrible at work. At this, Frank begins to question everything he knows and, seeking the truth, escapes his packaging with Brenda to investigate. Eventually, we follow Barry and an assortment of other foods into the home of a human shopper, and the film suddenly becomes a darkly funny horror show where Barry’s friends are skinned, chopped to bits, and eaten before his very eyes. Meanwhile, all manner of real-world parallels are worked into this setup. Normally mortal enemies, a Woody Allen-esque bagel (Edward Norton) and an angry lavash (David Krumholtz) somehow represent a commentary on Middle East tensions; and Frank tries to convince everyone in Shopwell’s that believing in the Great Beyond is absurd when there’s no evidence to support it. And while the playthings from Toy Story may have accepted their intended purpose and lot in consumerism, the food in Sausage Party responds in all-out revolt, attacking their gods and in many cases delivering bloody death. Still, given that the film’s perspective aligns with the food characters, watching the humans go down remains strangely cathartic.

Directed by Conrad Vernon and Greg Tiernan, Sausage Party’s animation by Nitrogen Studios (best known for Thomas & Friends, curiously enough) holds up against the lesser animation studios, such as Fox. The proceedings are packed with visual innuendo, serving as juvenile humor but also, in some cases, a critique of the food industry. These foods speak with the stereotypes embedded into their branding, meaning Salma Hayek voices a taco and, because she’s a taco, a euphemism for a vagina, she’s also a lesbian. Scott Underwood voices an effeminate Twinkie. And a crucial bottle of booze called Firewater is given a Native American inflection by Bill Hader, propelling the drunken stereotype alongside more broadly racist dialogue like “Hey-how-are-ya” chanted over a fire. And yet, the script by Kyle Hunter, Ariel Shaffir, Evan Goldberg, and Rogen is too smart to unknowingly incorporate race humor. Offensiveness is all around in the film, but there’s no need to feel guilty about laughing because it’s delivered with a didactic, self-aware quality.

After Sausage Party was over, I realized that I didn’t audibly laugh at the film’s many playful visual and verbal jokes—many of them dependent on scatological and bawdy sexual references—but I thought more than I anticipated I would. The commentary on religion and belief systems is quite effective in its own metaphoric terms. As for the humor, I can only lament that my fine state of Minnesota hasn’t joined Colorado or other states in legalizing marijuana. Surely, at some point between conception and execution, the talent involved was under the influence, and many of the film’s setups and gags would probably garner heartier laughs with some THC in the system. The filmmakers seem to acknowledge as much in a sequence involving a wasteoid (Paul Rudd) who shoots-up bath salts and sees his groceries for what they really are—living, breathing, thinking beings. Smarter than it seems, Sausage Party’s world-turned-upside-down approach evokes a carnivalesque style of humor that balances well with its more thoughtful denouncements of blind faith.