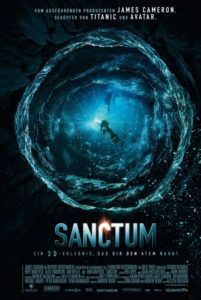 You’ve seen Sanctum advertised as “from James Cameron, director of Titanic and Avatar”, however in the fine print the credits read: Directed by Alister Grierson. Cameron served as executive producer on this cave-set survival fare, overseeing the utilization of his breakthrough 3D Fusion technology, while Australian filmmaker Grierson (Kokoda) helmed the picture. But that didn’t stop Universal Studios from using Cameron’s status to sell their movie and confuse audiences. Nevertheless, any moviegoer familiar with Cameron’s body of work will quickly realize the result simply isn’t worthy of him, even though much of story and location mirrors some of Cameron’s work.

Largely exaggerated for dramatic effect, the script by John Garvin and Andrew Wright is based on Wright’s experiences diving, and just barely surviving, in an unexplored underwater cave system. And it’s easy to see why Wright’s screen story attracted Cameron. The chasm setting with deadly underwater obstacles, including pressure sickness, recalls Cameron’s The Abyss; on the surface a storm confines the survivors to their treacherous surroundings, creating a potboiler suspense, much like the hurricane in The Abyss; the desire for underwater exploration in general echoes Cameron’s documentary Ghosts of the Abyss; and tunnels flooding with blasts of unyielding freezing water remind us of the sinking scenes from Titanic. Though Wright may have lived the story, Cameron certainly influenced the screen version.

A number of conventional characters and predictable developments make the otherwise dynamic setting less remarkable than it should be. Whining youth Josh (Rhys Wakefield) has been dragged on a series of caving expeditions all his life by his rugged, unsympathetic father, Frank (Richard Roxburgh). The latest is two miles underground in Papua New Guinea’s Esa ‘ala caves, where skilled explorer Frank hopes to lead a team through the system to the ocean. All at once, a freak storm arrives topside, threatening to flood the caves, and with the entrance blocked, Frank must lead the team out through the unexplored end. Ever resentful, Josh blames every accident or regrettable death on his father, until, of course, the boy realizes he’s just like his father, a consummate survivalist. Unfortunately, the script isn’t satisfied with its “man vs. nature” scenario and offers up some character turns that feel underdeveloped and haphazard, whereas something simpler would have sufficed. This movie didn’t need a bad guy, but they give us one and kill him off within a matter of minutes.

Forced to see the movie “the way it was meant to be seen”, this critic endured a 3D screening, as Universal has gone to great lengths to make sure most theaters aren’t carrying the 2D option. Striking was the utter lack of light in the picture. Given that the plot involves explorers trapped in an underground cave system, the potential for bright colors to make up for 3D’s incessant darkening of the screen image (as Avatar did with its bright palette) is nil. Grierson does his best to light the picture with hues of blue and green from underwater illumination and glow sticks, but those awkward 3D glasses create a muddy filter through which much of the setting’s majesty is lost. For example, there’s a scene where the camera pulls back to reveal a “cathedral” cave opening, but the audience can’t quite make out the size of a vast, dark cavern because of those glasses. However tiring the anti-3D argument may be for some, Hollywood technicians still haven’t figured out how to correct this basic flaw, which decreases the chance for most films, save for a few shining exceptions, to surpass the downfalls of the darkened theatrical presentation in 3D.

Sanctum earns an R-rating for one or two F-words and some nasty bloodshed resulting from climbing mishaps. The rating comes as a surprise, actually, since Hollywood so often makes cuts to earn a more accessible PG-13 rating, thus allowing for larger audiences and larger box office receipts. Luckily, Cameron has always managed to turn his R-rated films (The Terminator, Aliens, et al) into major blockbusters, often for the sake of further immersing the viewer in the experience. In that respect, Grierson was fortunate to have Cameron in his corner. By not pulling these punches, the movie illustrates just how dangerous spelunking can be, and that realism should not go unrecognized. Yet the failings of 3D, the ironically one-dimensional characters, and hammy acting squander any hope of losing oneself in this tale of survival. Audiences would be better off revisiting The Abyss for the same basic premise, only executed with equal parts intellect and adventure.