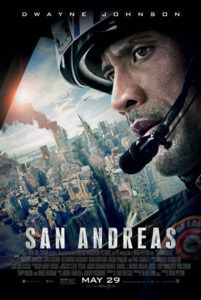 Perhaps to distinguish itself from the 1974 disaster movie Earthquake, about a shaker that leaves Los Angeles in ruins, the filmmakers of San Andreas carefully avoid that word on the poster and marketing materials. They even call their California-wide earthquake a “seismic swarm event” to create a distinction. Such scientific mumbo-jumbo doesn’t lessen the fact that this is typical Hollywood disaster fare of the Rolland Emmerich variety. Or maybe the avoidance of “earthquake” is because recent real-life quakes have shaken Nepal and left several thousand dead, leaving it difficult hard to enjoy the popcorn-munching intent without thinking to yourself, “Too soon.” (Emmerich should hope an alien invasion doesn’t occur between now and next year’s Independence Day sequel.) Instead of dwelling on the mass destruction therein, recent marketing efforts have focused on leading man Dwayne “The Rock” Johnson, relying on his face, bulging muscles, and signature eyebrow raises to draw crowds. But a disaster movie is a disaster movie, no matter the name or advertising.

Sure, disaster movies can be fun. But they’re almost always guilty pleasures. They usually consist of formulaic writing, one-note characters, and scenes of CGI annihilation, the artificiality of which distances us from the mass death onscreen. Buildings collapse, people perish, and recognizable landmarks are obliterated. My favorite disaster movie is Dante’s Peak from 1997, about a volcano that erupts over a small town, and the volcanologist who rushes up the mountain to save grandma before the lava hits (at least the dog survives). San Andreas is another movie where thousands, perhaps even millions of people meet their demise as a result of a catastrophe, but the filmmakers reserve all sympathy for a mere handful of characters, the fates of which are over-sentimentalized to melodramatic heights. Director Brad Peyton, who previously collaborated with Johnson on Journey 2: The Mysterious Island, capably embraces the Emmerich mold, but the script by Carlton Cuse and the mediocre cast fail to distract us from the timeworn formulas.

The characters in focus here include the following: Ray (Johnson), a search-and-rescue helicopter pilot in Los Angeles whose tattooed biceps once flew missions in Afghanistan. Ray’s soon-to-be-ex-wife, Emma (Carla Gugino), needs him to sign divorce papers because she’s about to move in with her new beau, Daniel (Ioan Gruffudd), a snooty and selfish real estate developer who just know is going to get it bad. When an enormous quake hits Los Angeles and leaves its various landmarks in ruins, Ray and Emma band together to rescue their daughter Blake (Alexandra Daddario), who’s headed back to college in San Francisco on Daniel’s private jet. There, Blake meets British twentysomething Ben (Hugo Johnstone-Burt) and his rambunctious younger brother, Ollie (Art Parkinson). Ray and Emma’s time is limited, however, as the resident seismologist played by Paul Giamatti explains in a nervy fashion that another, even more powerful seismic event is likely to hit San Francisco Bay. The former couple previously lost a daughter to drowning, which contributed to their marriage falling apart. And so, of course, Blake must be subjected to a near-drowning as well, allowing her rescue to restore Ray and Emma’s relationship.

Peyton’s disaster sequences come in a barrage of computerized special FX, rendering the cataclysm in the somewhat cartoony animation style that has become standard in disaster movies—instead of the more realistic, harrowing ones that made The Impossible and early scenes in Hereafter so powerful. Buildings collapse on themselves, others sway like trees in the wind, the Hollywood sign topples over, the ground surges like a wave, and huge fissures open over miles of land. And once again, Hollywood proves that the Golden Gate Bridge is their favorite new landmark to destroy when it’s consumed by the force of a tsunami. All manner of vehicles are destroyed, cars and boats and planes, and CGI people are tossed about the screen. Despite the level of detail, the animators have incorporated into scenes of devastation, it all has a detached quality, perhaps because we’ve seen this sort of thing before. And what’s more, the story is content to avoid realism to fully embrace the genre’s customarily mindless entertainment value. No matter, all safety is restored by the end, as indicated by the finale’s long, ponderous, and quite ridiculous shot of the American flag.

San Andreas isn’t real, we know it’s not real, and the filmmakers haven’t bothered to push the limits of their special FX technology to convince us otherwise. Jokey dialogue and corny music keep the mood diverting rather than affecting, even when the script veers into extreme peril. As we watch, we disassociate ourselves from the heaps of death and destruction onscreen, because it’s delivered to us in a familiar format, the traditional layout of the disaster movie. Maybe it’s a reflection of our morbid society that a movie about such monumental ruin would provide even the slightest level of escape, but it does, in a lazy Sunday afternoon kind of way. While its entire reason for being is to supply a bankable, familiar product that will deliver extensive returns, we can feel safe in the knowledge that a movie like San Andreas will not test our limits and will quickly disappear from our thoughts. The people of Nepal aren’t so lucky.