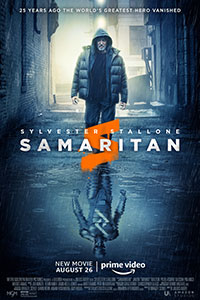 Samaritan is as generic as superhero movies come. Based on graphic novels by Bragi F. Schut, Marc Olivent, and Renzo Podesta, and published by Mythos Comics in 2014, the material aims to blend inner-city realism and super-powered fantasy. But credited screenwriter Schut delivers simplistic characters with basic motivations; they speak in corny dialogue, and their conflicts prove glaringly uncomplicated and obvious at every turn. Without the skill of director Julius Avery—whose Overlord (2018) ensures that I’ll always be interested in anything with his name attached—the movie might have played similarly to the unreleased 1994 version of The Fantastic Four. Fortunately, Avery and cinematographer David Ungaro make everything onscreen look convincing. The actors, too, deliver performances that almost distract from the banal lines they’re forced to speak. Debuting on Amazon Prime Video, Samaritan is best reserved for viewers who can’t consume enough from the current superhero movie and TV show trough.

The story takes place in Granite City (not the Twin Cities restaurant-brewery chain) and follows a young boy, Sam (Javon Walton), who befriends a garbage man named Joe Smith (Sylvester Stallone). Sam suspects that Joe is the titular hero, who disappeared 25 years earlier. In the opening’s clunky rotoscoped sequence that looks vaguely like comic book art, we learn that Samaritan fought his evil brother, Nemesis, in a Cain and Abel conflict. After a fiery battle, Nemesis was believed to be dead, and Samaritan withdrew from the public eye. A quarter-century later, people still talk about Samaritan and wonder if he’s still alive somewhere. And Sam is determined to find him; he even has a list of probable suspects from his neighborhood and shares theories with a local authority (Martin Starr). What’s more, Sam’s dad died years earlier, and his mother (Dascha Polanco) is mostly absent and struggling to pay the rent. So, Psychology 101 tells us that Sam isn’t just looking for Samaritan but also a dependable parent.

Indeed, Sam teeters between two fatherly influences: There’s a gang of local criminals led by Cyrus (Pilou Asbæk, best known as Euron Greyjoy on Game of Thrones), who arms himself with “blackout bombs” that shut down electronic devices. Cyrus’ underlings enlist Sam in some petty crime, resulting in a much-needed payday that means he can help his mother keep the landlord at bay. Alternatively, there’s Joe, who, with his carefully trimmed gray beard and affinity for hoods, pummels local criminals when no one’s looking. Sam soon discovers that Joe is Samaritan, and the former hero’s super strength and invulnerability remain intact. Though, when pushed to their limits, Joe requires a cool-down. In this, Samaritan feels like it was written by a 13-year-old boy who wished he had a cooler dad. After all, who wouldn’t want a bona fide superhero for a father—especially one with a freezer full of Edy’s ice cream to ensure his powers don’t cause him to overheat? The only problem is that Joe wants to remain in hiding and views Sam as a pest. 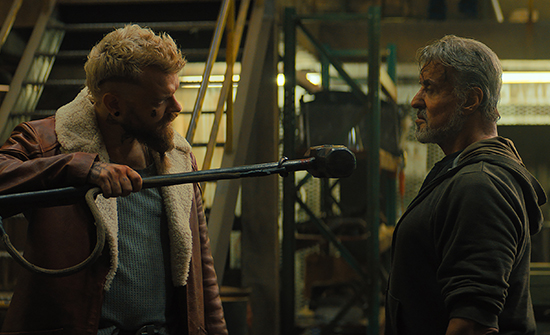 The movie plays out predictably enough. Cartoonishly criminal, Cyrus, who worships Nemesis, steals the super-villain’s mask and rage-fuelled sledgehammer (which have been sitting in a police evidence locker for 25 years, conveniently enough). He becomes the new Nemesis, thus requiring Samaritan to come out of hiding and confront the bad guy. But the whole concept behind Nemesis is shaky. Cyrus looks up to Nemesis because he punched out the “right people,” suggesting that his label “Nemesis” was just terrible branding. Perhaps he should have chosen a name with less negative, oppositional connotations. This is a common problem among comic book villains, such as the X-Men’s The Brotherhood of Evil Mutants or Spider-Man’s The Sinister Six. Every villain is the hero of their story, so why choose villain-esque names like “Nemesis” or “Evil Mutants”? Moreover, Cyrus addresses Samaritan as “good guy,” implying that Cyrus knows he’s the opposite, a bad guy. This adds further confusion to the character’s understanding of his place in the movie’s good-evil dichotomy.

In any case, such polarized thinking is evidence of how everything in Samaritan proves one-dimensional. Even when the filmmakers introduce a twist, which I won’t spoil here, it’s not to layer the character or pull the rug out from under the viewer. It’s a throwaway moment that doesn’t come with any meaningful changes in Joe and supplies information alone. Similarly, the film doesn’t do much with Sam’s daddy issues, and the character feels more like a passive witness to superhero action than an essential narrative component. The acting fares better than the writing. Asbæk lends his wild eyes to Cyrus, a villain who’s only interesting because of the actor. Stallone looks stiff and Hellenistic under a series of grimy jackets, plaid flannel shirts, and baggy jeans. But he uses that post-Balboa earthiness to his advantage. Stallone is a producer here, and undoubtedly, he saw some of the aged Rocky and Rambo in Samaritan.

Samaritan looks competent despite its uninspired storytelling. Avery’s eye makes the action scenes cohesive, even exciting, save for the climactic battle amid unconvincing CGI flames. However, some of the production design work by Greg Berry and Christopher Glass has a plastic quality, including the Nemesis and Samaritan costumes that look like hockey outfits from the year 2075. The overall effect gives the impression that Samaritan was engineered for a streaming-only debut; therefore, it wasn’t given the attention a larger production might receive. Then again, the movie is rated PG-13, but there’s a hint of a harder edge that has been softened in the editing room. Stallone utters “Fuck no” at one point, and some of the violence gets gristly when Samaritan hammers a live grenade into a goon’s chest and says, “Have a blast!” But after watching The Boys on Prime Video, along with countless other superhero movies that are grittier and more sophisticated, this one seems like kids’ stuff.